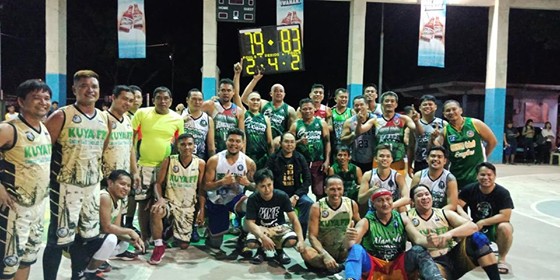 WITH archrival Opol Eagles now playing for other region, the Green CdeO Eagles literally had a walk in the park in winning both the 39-below and 40-up championships of the 2019 NMR-1 Eagles Inter-Club basketball tournament concluded over the weekend at the covered court of Barangay Iponan, Cagayan de Oro City.

Ronald Rey “Boning” Biongcog, hobbled by heart-breaking injuries in the past, sparkled with his acrobatic moves in Green CdeO’s 79-71 conquest of the Bee Datuinguinoo-led Majacajar Eagles Club in the 39-below final.

Boning got a lot of help from LJ Aquino, Shian Galanida, Solidum, RanRan Bantawig and “big boy” Sobiono in neutralizing Macajalar’s explosive forward Datinguinoo, who was instrumental in the Green CdeO Team B’s failure to enter the championship round.

Bannered by the huge tandem of Rex Armojallas and Samboy Uy, the Green CdeO Team B dribblers were the hands-down pick to challenge Romulo and company for the crown. But they got ambushed by the Green CdeO Team C charges of playing coach Arnel “Popovich” Baba behind the guns of Tata Bajao, Windel Relevo and Khoy Macapayag.

The mighty Opol Eagles of GAT Tamayo and Toto Cortez used to dominate the league in the 40-up level, apart from being perennial title contender in the 39-below category.

“With Opol Eagles no longer around in the NMR-1 basketball rivalry, expect the Green CdeO Eagles to rule the Governor’s league for a long time,” one NMR-1 cager told SunStar Cagayan de Oro.