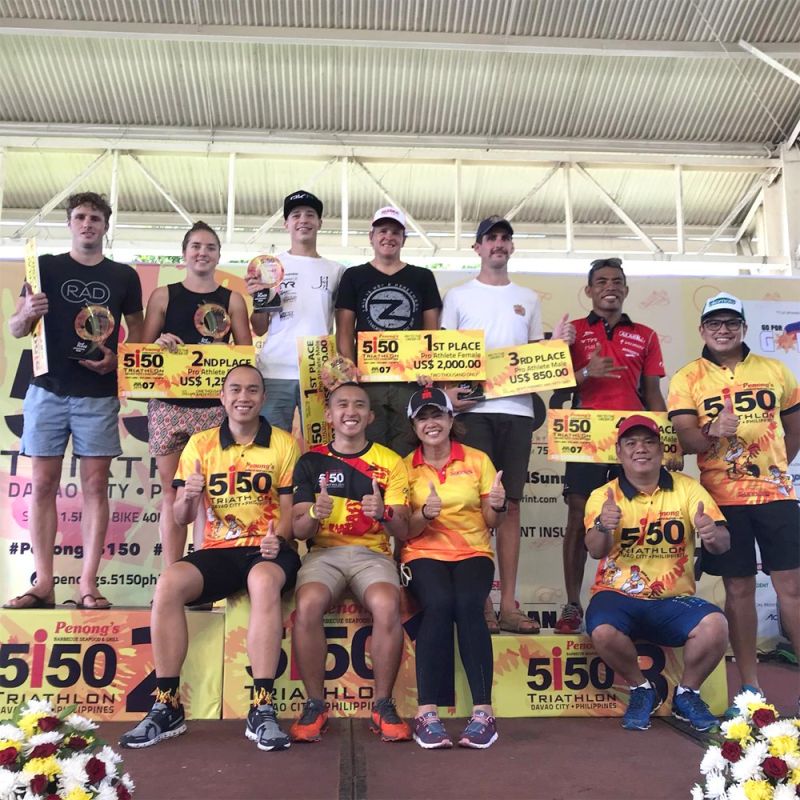 DUATHLON. Winners of the Penongs 5150, reduced to a duathlon due to sea conditions, pose with their medals after the event. CONTRIBUTED FOTO

JAKUB Langhammer flashed his superb biking skills to check a long search for local crown while Aussie Dimity Lee Duke dominated the women’s side in the pro division of the first Penong’s 5150 reduced to a duathlon event in Davao City on Sunday, July 7, 2019.

Langhammer charged back from fourth after the first leg of the 2.5km run-40km bike-10km run event with a strong showing in the middle stage then cruised to victory in 1:46:00, his first triumph in the country after a number of failed bids, including a third place effort in Black Arrow 5150 won by Mitch Robins in Subic last November.

Originally set as over the Olympic distance 1.5k swim-40K bike-10K run race, organizers scrapped the opening leg due to concerns over the quality of water in the swim stage on the eve of the event, citing the safety of the participants as their top priority.

Though a duathlon competition, the Czech still seized the moment, posting the fastest time of 57:28 in the bike to take control on his way to beating New Zealand’s Kiera McPherson by over three minutes for the top honors worth $2,000. Langhammer timed 8:00 and closed out with 37:21 in the two run legs.

McPherson and Robins of Australia turned in identical clocking of 07:59 in the first run part but failed to keep in step with Langhammer in the bike and lost steam in the closing run event.

The multi-titled Duke, on the other hand, took charge early and won pulling away in 2:02:10 with Kiwi Laura Wood coming in way behind in 02:09:02 in their side of the centerpiece event organized by Sunrise Events Inc. and sponsored by Davao’s favorite barbecue house Penong’s Barbecue and Seafoods Grill for the first time. (PR)