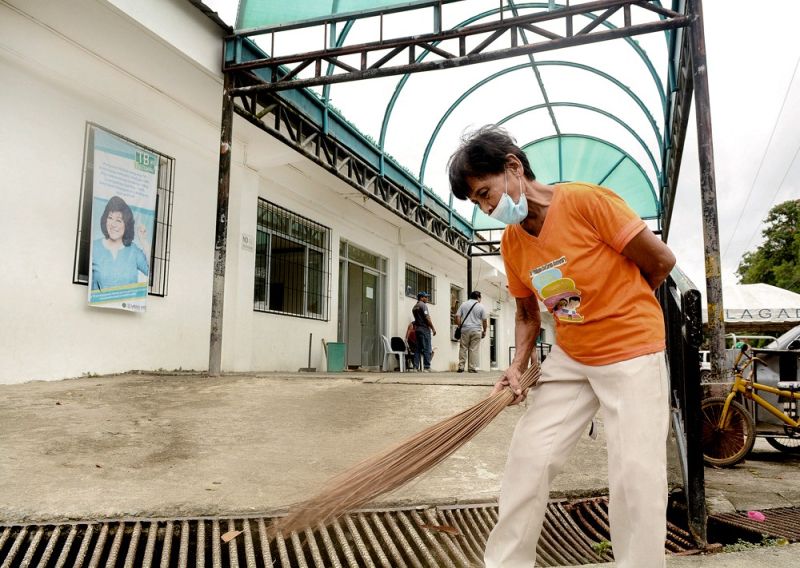 TWO-PRONGED STRATEGY. If Gov. Gwen Garcia pushes through with her plan to outsource personnel of the Provincial Government, especially in district hospitals like the one in Toledo City (above), the Capitol will not only save money, but it will also get rid of the padrino system. (SUNSTAR FOTO / ALLAN CUIZON)

“FROM now on, wa nay backer-backer (no more backers).”

So said Gov. Gwen Garcia as she mulled over the possibility of outsourcing employees of the Provincial Government, especially for the district hospitals, to cut cost and remove the padrino system.

“I am seriously contemplating, especially in district hospitals, the outsourcing method. Ang ato man gud nakita, ang kaning mga JOs (job order) dunay backer (From what we’ve observed, these job order workers have backers). Ang nahitabo (what happened was), and this was also confirmed by the chiefs of hospitals, inig abot didto sa hospital, halos dili maka-disiplina or even tell them, katong mga powerfully-backed JOs, kung unsa ang ilang buhaton (they have difficulty disciplining or even telling those powerfully-backed JOs what to do),” she said.

Outsourcing is the method of obtaining goods or services from an outside source, especially in place of an internal source.

Issued on June 15, 2017, by the Civil Service Commission, Commission on Audit and the Department of Budget and Management, Joint Circular 1-2017 provides the rules and regulations governing contract of service and JO workers in the government.

Section 5.1 of the joint circular refers the contract of service to the engagement of the services of an individual, private firm, other government agency, nongovernment agency or international organization as consultant, learning service provider or technical expert to undertake a special project or job within a specific period.

Section 5.4, on the other hand, defines job order as a piece work (pakyaw) or intermittent or emergency jobs, trades and crafts services, among others. These jobs are of short duration and for a specific piece of work.

As a general rule, government agencies may avail themselves of outsourced services through institutional contract of service, subject to the following conditions: institutional contract of service covers lump sum work or services to perform janitorial, security, consultancy and other support functions for a maximum period of one year subject to the provisions of Republic Act 9184 or the Government Procurement Act, and pertinent budgeting, accounting and auditing rules and regulations.

The discipline of workers under institutional contract of service shall be the responsibility of the contractor or service provider. The head of the procuring entity may report to the contractor any misconduct or wrongdoing of the said worker.

The service provider shall be responsible for providing the workers with compensation and benefits compliant with existing labor laws, including the necessary social security and other benefits mandated by law in addition to the direct compensation as payment for their services.

The government, though, may also hire individual contract of service and JO workers.

For a contract of service worker, the term of contract between parties shall be for a maximum period of one year, renewable at the option of the head of the procuring entity, but in no case shall exceed the term of the latter.

Individuals hired through contract of service have the option to enroll themselves in social benefit programs through the Social Security System, PhilHealth and Pag-IBIG fund as self-employed members.

Individuals hired through JO, on the other hand, shall be paid wages equivalent to the daily salary of comparable positions in government and a premium of up to 20 percent of such salary.

They may be either paid according to an agreed contract amount for the piece of work or on a daily wage basis.

The payment for both types of services shall be charged against the maintenance and other operating expenses in the approved budget.

At the Capitol, records at the Provincial Human Resource Management Office showed that as of May 2019, the Capitol had over 4,000 employees, broken down as follows: 2,296 covered by JOs and contracts of service; 1,090 permanent workers; 626 casual employees; and 18 who were coterminous or whose employment ended with the change of leadership.

Of the number, some 1,600 are employees in provincial and district hospitals.

As of June 29, the services of around 1,043 temporary workers were retained by the Garcia administration.

The list of the first batch of 167 shortlisted workers was posted outside the Cebu CFI Community Cooperative building at the Capitol compound last June 28.

The second batch was released last June 29, bearing the names of 40 temporary workers whose services were retained.

Some 825 medical personnel assigned in provincial and district hospitals and 11 employees of the Provincial Health Office based in Capitol have been retained as well.

Of the 40 shortlisted workers last June 29, 15 were medical personnel who were deployed to provincial and district hospitals although their initial appointment provided that they take base at the Capitol.

By letting go of some temporary hospital workers, Garcia said the Province will save around P31 million a month.

“In one year that’s over P360 million. We could very well spend that in improving hospital facilities, even in providing more free hospitalization. Magasto na nato (We can spend that) more prudently nga dili mahurot nalang og panweldo og mga taw nga di nimo igkit-an (instead of it getting used up to pay the salaries of people you never see at work),” she said.

Because of the Capitol’s padrino system, Garcia said, healthcare services in hospitals have “degenerated” and have been the subject of complaints.

Should the governor decide to push through with her plans to outsource personnel, this won’t be the first time for the Capitol to have its manpower sourced out from a private service provider.

During Garcia’s earlier stint as governor, the Capitol outsourced doctors, nurses, health aides and even drivers to ensure that personnel were available 24 hours, seven days a week.

The move was an offshoot of the “exodus of doctors and nurses” that left positions vacant because medical personnel preferred to work abroad rather than in far-flung areas of Cebu.