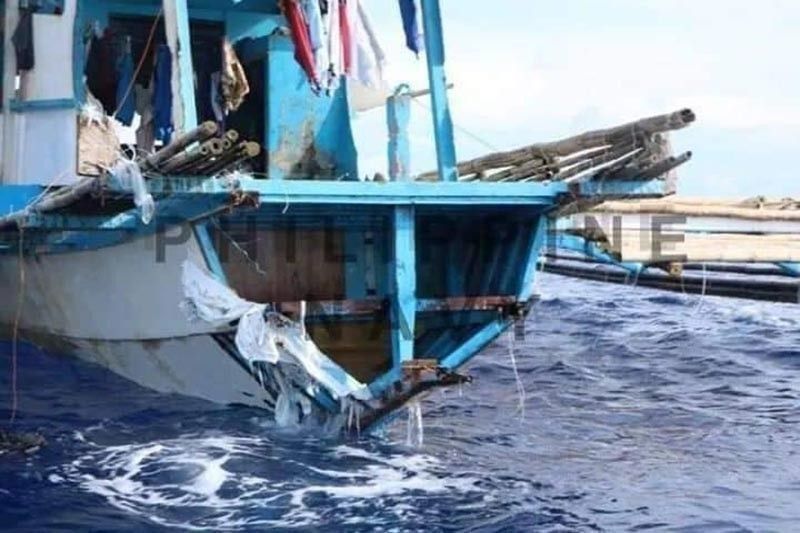 WHAT President Rodrigo Duterte had described as a "little maritime accident" was a "very serious marine casualty", according to the report of the Philippine Coast Guard (PCG) and Maritime Industry Authority (Marina) on the Recto Bank allision between a Filipino fishing boat and a Chinese vessel.

The PCG-Marina description of the incident does not contradict President Rodrigo Duterte's "little maritime accident".

"There is no contradiction insofar as that incident is considered, given the fact that Filipinos were placed in a dangerous situation where they could have been dead," the Palace official told Palace reporters.

"That's serious enough, but when the President says [it's just a little maritime accident], it's not that serious enough to blow it into an international crisis, that is what he meant. So both of them are correct," he added.

On June 9, a Chinese vessel rammed, sank, and abandoned Philippine fishing boat F/B Gem-Ver1, which was anchored near Recto Bank, which is located within Philippine waters.

The sunken F/B Gem-Ver 1 was carrying 22 Filipino fishermen who were later rescued by the crew of a passing Vietnamese ship.

The PCG-Marina report classified the Recto Bank incident as a "very serious marine casualty" based on the Code of the International Standards and Recommended Practices for Safety Investigation into a Marine Casualty or Marine Incident because of the total loss of Gem-Ver1.

The report referred to the Chinese vessel as an "unidentified Chinese fishing vessel" and not Yuemaobinyu 42212 as previously identified by the Chinese Embassy in Manila.

The report stressed, among others, that the Chinese boat "failed to take appropriate action to avoid the risk of collision and to render assistance to a vessel in distress."

However, the report claimed that the F/B Gem-Ver1 also had shortcomings for "failure to maintain a proper lookout; employing an unlicensed chief engine officer; carrying persons onboard in excess of the authorized capacity; expired Bureau of Fisheries and Aquatic Resources (BFAR) commercial fishing vessel/ gear license; and expired BFAR certificate of clearance."

Panelo said the Philippines and China first have to reconcile their different versions of report on the June 9 allision, before the Duterte government orders the immediate filing of charges against the crew of the Chinese vessel.

"[Foreign Affairs Secretary Teodoro Locsin Jr.] said they're going to compare our findings as against their findings, and they will issue a joint statement for the resolution of the three issues that I have mentioned -- one, the nature of the incident; number two, the accountability of the Chinese vessel; and the issue on compensation," he said.

Manila and Beijing have agreed to conduct a joint investigation on the incident at Recto Bank to resolve the issue.

Asked how the Palace would make the Chinese fishermen accountable for endangering the lives of Filipino fishers, Panelo said: "First, sila ang mag-decide niyan. Kasi nga supposed to be ang Chinese vessel, under their jurisdiction 'yun. At sinabi na rin nila na they will not allow it. Kung may kasalanan sila, they will impose sanction for their irresponsible behavior."

(First, China will decide on it because a Chinese vessel is supposed to be under its jurisdiction. And it said they will not allow it. If they commit a mistake, they will impose sanction for their irresponsible behavior.)

"So kung accountable sila at meron namang compensation o prinosecute nila o whatever, kung anong sanction nila, oh 'di ba justice na rin 'yun. But if they cannot do that, then we will sue them in our jurisdiction. In-endanger nila ang lives. Pwedeng reckless imprudence resulting to serious damage of property and endangering the lives of our countrymen," he added.

(It's already justice, if they are held accountable, if they give us compensation, if they are prosecuted, or if they face any sanction. But if they cannot do that, then we will sue them in our jurisdiction. They endagered the lives of our fishermen. so they can be charged with reckless imprudence resulting to serious damage of property and endangering the lives of our countrymen.) (SunStar Philippines)