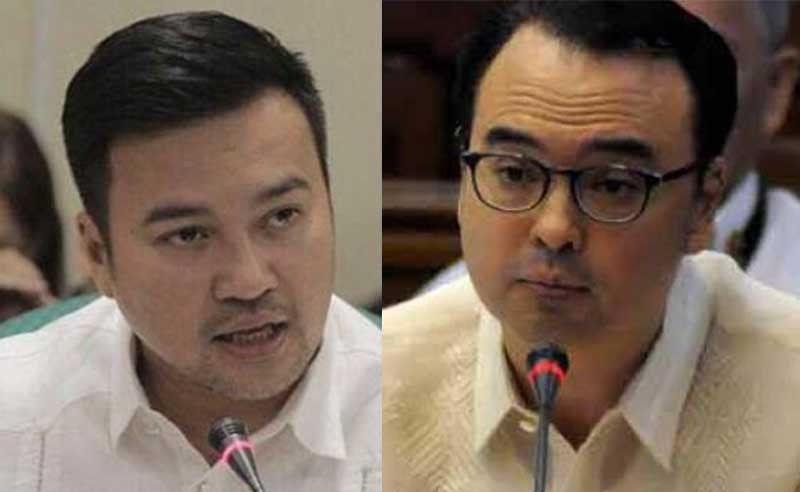 Duterte made the announcement during the mass oathtaking of new presidential appointees at the Malacañan Palace on Monday afternoon.

"It is about time I talk. So your Speaker will be Alan Peter Cayetano. Ang sharing dito is he shares the term with Lord Velasco," the President told his audience.

The new set of House leaders will be elected at the opening of the 18th Congress on July 22, on the same day that Duterte will deliver his fourth State of the Nation Address.

With Duterte's announcement, members of the House are expected to elect Cayetano first as Speaker.

Presidential Spokesperson Salvador Panelo said in a statement that Cayetano and Velasco would serve as the House Speaker "in the first 15 months" and the "next 21 months," respectively.

"Since the election of the Speaker has resulted in a bitter and fractious rivalry that threatens the break-up of political allies, the President, to save the unity of the alliance and avert its fragmentation, obliged to the request of the three candidates, who to their credit agree to respect the choice of [Duterte]," Panelo said in a statement.

"It’s Allan Cayetano as the Speaker in the first 15 months, then the next 21 months, the Speaker will be Lord Allan Velasco, with Martin Romualdez as the Majority Floor Leader," he added.

Duterte made the announcement after Cayetano, Velasco, and Leyte Representative Martin Romualdez met with him to seek his advice on how to resolve the issues concerning the leadership at the House of Representatives.

Cayetano and Romualdez are both allies of the President who are likewise vying for the highest position at the House.

"Romualdez will be the Majority Floor Leader. I tried to distance myself from the (Speakership race). But apparently, I said, it's time that I talk. So ganoon ho ang ano (So that's it). That's the set-up," the President said.

Panelo confirmed that Cayetano, Velasco, and Romualdez had sought the assistance and help of the President to "settle the conflict among them." (SunStar Philippines)