Barangay, tennis club will file charges vs each other 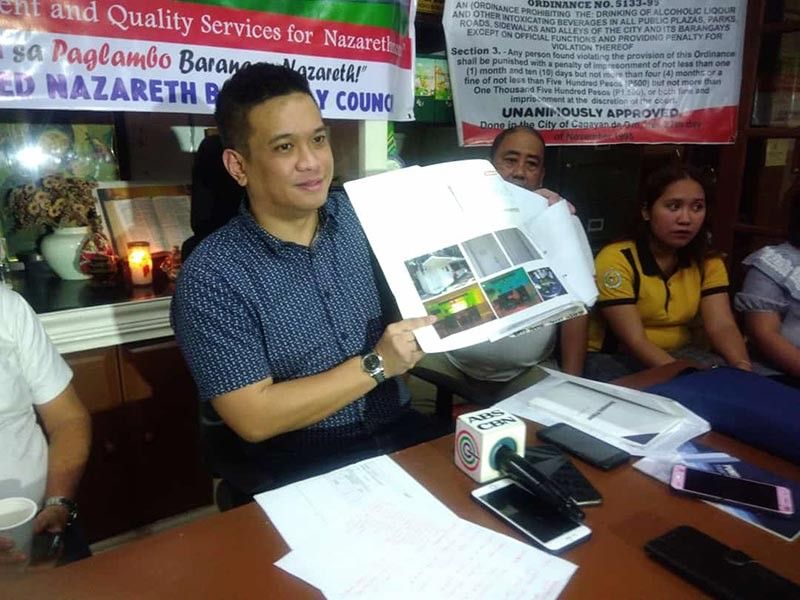 CAGAYAN DE ORO. Barangay Nazareth chairperson Maximo Rodriguez III shows to the media the proposed development plan once the contested tennis court will be demolished and converted into a multipurpose building. (Alwen Saliring)

BARANGAY officials of Nazareth, Cagayan de Oro City are set to file charges against officers of the Nazareth Lawn Tennis Club for refusal to vacate the property intended for the P21-million barangay hall building construction.

Its village chief, Maximo Rodriguez III, said Monday, July 8, that a legal panel with some lawyers from the barangay volunteered to file cases against the club president Charles Mejia, lawyer Tibs Palasan and John Elago for refusal to vacate, trespassing, threat, oral defamation and violation of the city ordinance against illegal bars.

On Friday, July 5, the barangay implemented an executive order to take possession of the premises of the tennis courts as a property under the control and supervision of the barangay government.

Tension was high when officers of the club showed resistance. The barangay and the club agreed for a status quo while the matter is not yet resolved.

Rodriguez maintained that their action was lawful as they followed legal and proper procedures.

Rodriguez said they acknowledge the City Government as owner but he said the barangay has the authority to implement all projects and programs within its jurisdiction.

Rodriguez said the Department of Public Works and Highways (DPWH), which will implement the three-story barangay building, has already issued a notice to proceed since the budget was already downloaded and pertinent documents are all complete.

He said the new one-stop barangay facility will house all offices to better serve the public.

Rodriguez also said barangay officials were fed up with the so many violations the club have committed for so many years.

He said the club erected a bar where intoxicating beverages and "videoke" were found. He said it has no permit and violates the barangay ordinance, which prohibits drinking liquor around the premises of public area such as courts and plaza of the barangay.

Rodriguez also said the club constructed another court and concreted its fence wall without barangay or city permit.

"We acknowledged nga dugay na ang tennis court but the organization is violating a lot of our ordinances so what's the use of having them here dili pwede dinhi nga daghan na kaayo gibuhat nga violations," Rodriguez said.

Nazareth barangay councilman Vincent Chaves said it is not the first time that the barangay attempted to take over the property.

For his part, Mejia said the club will also take legal actions against Rodriguez and some members of the barangay council.

Mejia said the club will stay unless the City Government will tell them to vacate.

Mejia also cried foul over the alleged use of force by the barangay officials and the police.

He also accused the barangay officials of illegally detaining the care takers and hitting some of them over the weekend, an incident that Rodriguez denied.