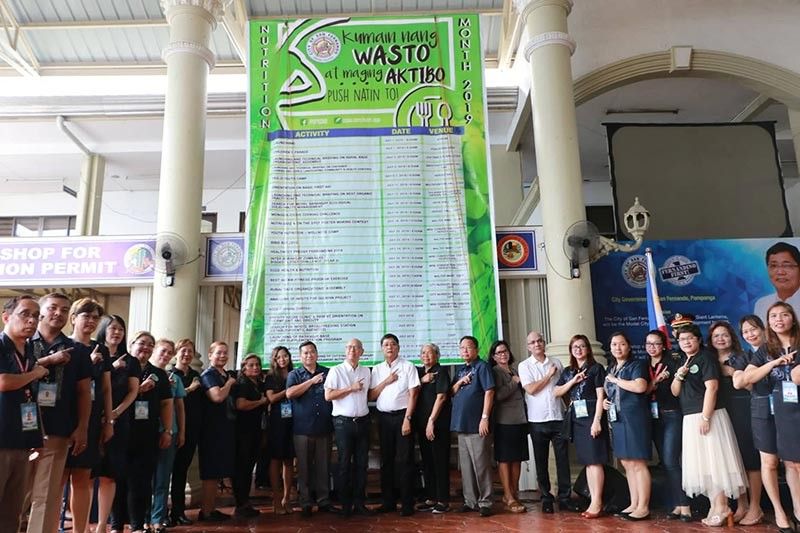 AS PART of the agenda to improve the health sector, the City of San Fernando is stepping up its programs to prevent and address malnutrition among Fernandinos.

During the launching of this year’s Nutrition Month celebration on Monday, July 8, 2019, the city government bared some of its programs that are aimed at ensuring the health and wellness of Fernandinos of all ages.

City Health Officer Eloisa Aquino said the city is deploying health personnel in schools through the School Health Board, and in the grassroots level through the barangay health workers and barangay nutrition scholars, to monitor the nutritional status of children, especially those aged 0 to 5 years old.

“We train individuals to be barangay nutrition scholars, as well as their counterpart on public schools in the city, who will be tasked to monitor the weight and nutritional status of the children in their respective areas of responsibility,” said Aquino.

She added that malnourished children that are monitored are urged to avail of the free multivitamins given at the rural health centers, as well as participate in the feeding programs implemented in schools and communities.

Rural Health Physician Renalyn Tongol, meanwhile, disclosed that the malnutrition rate in the city remains fluctuating over the years due to several cases of in-migration caused by relocating families from different parts of the province.

She noted that transient malnourishment, usually extending to severe levels, are commonly monitored in resettlement areas across the city.

To address such cases, Tongol said CHO has partnered with the Public Employment Services Office (PESO) to provide job opportunities to individuals whose families have migrated to the city.

“The root cause of malnutrition is and has always been poverty and we wanted to address this not only through feeding programs and the like, but also by providing a stable employment to the families through the help of our PESO,” she said.

Mayor Edwin Santiago, for his part, underscored the “Healthy si Mommy, Healthy si Baby” program of the city government implemented to ensure the wellness of Fernandinos at the earliest stage.

“If a pregnant mother is undernourished, the probability that her baby is malnourished is relevant that is why the city is also focusing on maternal and neonatal healthcare,” he said.

Citing the numerous benefits of breast milk to the general welfare of the babies, Santiago also urged Fernandino mommies to practice breastfeeding until the age recommended by professionals.

He added that proper information dissemination and education among Fernandinos, especially children, and practice of healthy lifestyle will also be beneficial in ensuring the overall fitness of every Fernandino.