Mislatel gets permit to operate as 3rd telco 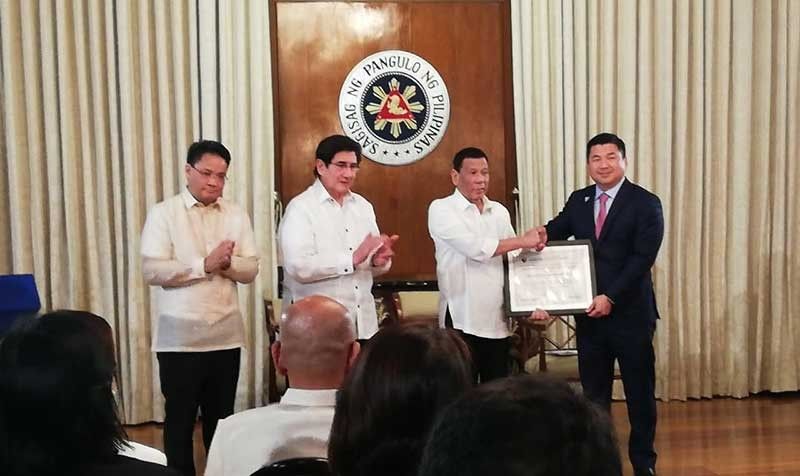 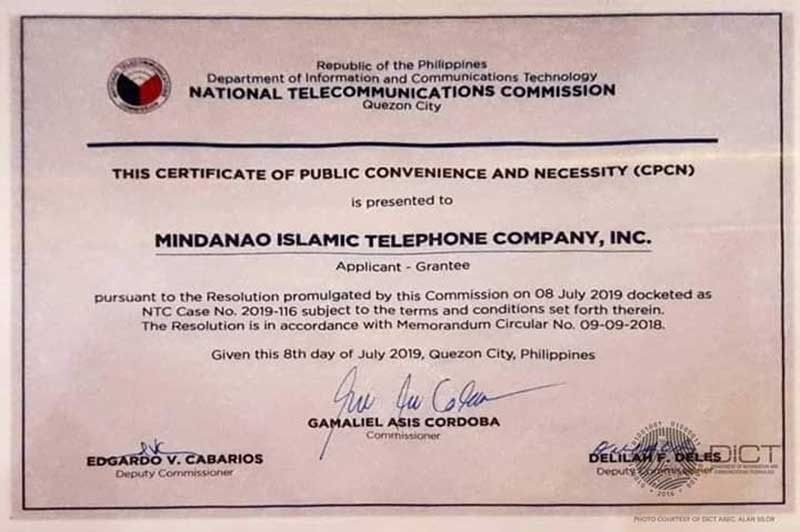 The National Telecommunications Commission (NTC) issued the Certificate of Public Convenience and Necessity (CPCN) to Mislatel in a ceremony held at Malacañan Palace.

Mislatel Consortium is a partnership between Uy's Udenna Corporation and its subsidiary Chelsea Logistics and Infrastructure Holdings Corporation, and China Telecommunications Corporation.

In a statement, Mislatel said it will be renamed to Dito Telecommunity Corporation.

The CPCN was granted after Mislatel complied with the requirement to put up additional paid-in capital of P10 billion and performance security bond amounting to P25.7 billion.

The company will offer only 4G technology in line with its commitment to increase internet speed in the country to 55 Mbps. There will be no legacy 2G or 3G services.

The company also said it will conduct a pilot user program towards the end of 2019 to test its network prior to commercial operations in 2020.

Mislatel committed to achieve 37.03 percent national coverage with an average speed of 27 Mbps on its first year of operations.

By its fifth year of operations, it is expected to cover 84.01 percent of the population with an average speed of 55 Mbps.

I haven't used my twitter account for work in a long time but allow me to share our press release on our being awarded our CPCN. Excited to bring 5G to the Philippines and to improve connectivity for all Filipinos. #DITO NA! pic.twitter.com/ZKrV9JJuqg

In his speech, the President welcomed the entry of Mislatel as the third major player in the country's telecommunications industry.

"Today, we mark another milestone in the continuing advancement of our country’s information and communications technology capability with the entry of a new major telecommunications provider," he said.

"Through the efforts of the Department of Information and Communications Technology and the National Telecommunications Commission, we take one step forward in fulfilling this administration’s commitment to provide better telecommunications services to the Filipino people," he added.

"Let me take this opportunity to pose this challenge to Mislatel [Consortium]: Break the prevailing duopoly in the telecommunications industry and fulfill your commitment to provide better telco services to our people," he said, referring to the duopoly of PLDT/Smart and Globe Telecom.

"Let us take the entry of this [new] telco player as a breath of fresh air in our rapidly evolving information age, where no one should be left behind in our pursuit of an inclusive and sustainable progress for all Filipinos," he added.

Duterte first issued the order to facilitate the entry of a third telco in December 2017. The NTC declared Mislatel as the New Major Player after a bidding in November 2018.

Since then, laws have been enacted and rules issued to ensure that Mislatel's entry would be smooth.

The government has been implementing a common tower policy, which allows tower providers to build cellular towers that may benefit Mislatel and other telco players.

The Mobile Number Portability Act allows consumers to keep their mobile numbers even if they switch networks. Telcos have also been mandated to unlock their handsets to allow consumers to easily switch to another provider using the same phone or gadget. (Ruth Abbey Gita/SunStar Philippines)
< Previous PageNext Page >