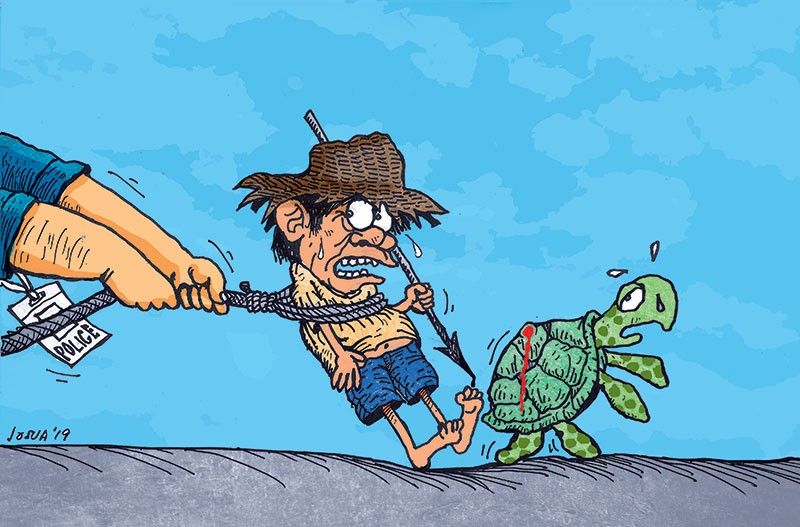 THE men from the 701st Maritime Police Station (Marpsta) and the Criminal Investigation and Detection Group (CIDG) were on a regular patrol in the waters off Lapu-Lapu City over the weekend. Passing by the neighboring islet of Barangay Caohagan, a regular destination for island-hopping tourists, they caught sight of three men on motorized banca acting suspiciously.

As the authorities approached, the men surreptitiously flung a yet unidentified load off the boat. Unfortunately for the suspects, the thing merely stayed on surface, allowing the maritime police to immediately spot the dead sea turtle.

It just wasn’t their day. Suspects Darami Radja, 50; Barayan Alim, 32; and Julius Asamsa, 49, all from Sitio Puntod, Barangay Mambaling, Cebu City, drove a spear gun into the poor turtle’s carapace. The prize catch, by Caohagan’s wet market standards, would have earned them a good sum. It could be pricier somewhere else; only they knew of a generous trade. Instead, funny fate set them up as the day’s catch, by no less than the maritime police. They were caught with two improvised spear guns, diving fins and diving masks.

Republic Act 9147 or the Wildlife Resources Conservation and Protection Act renders punishable the harming and killing of endangered animals. Radja, Alim and Asamsa may be imprisoned for six to 12 years. The law says they would have to pay the fine of P100,000 to P1,000,000. A marine tragedy for the suspects, and a warning for seafaring bandits sans scruples over delicate marine resources.

The suspects are now behind bars at the Regional Maritime Unit Headquarters in Lapu-Lapu City, pending the filing of charges for their violation.

The dead turtle will be turned over to the Wildlife Bureau of the Department of Environment and Natural Resources Central Visayas for proper disposal.

We congratulate the men from CIDG 7 and Marpsta for the vigilance. The arrest won’t bring the poor turtle back to life, but it will keep alive an awareness on environmental laws.