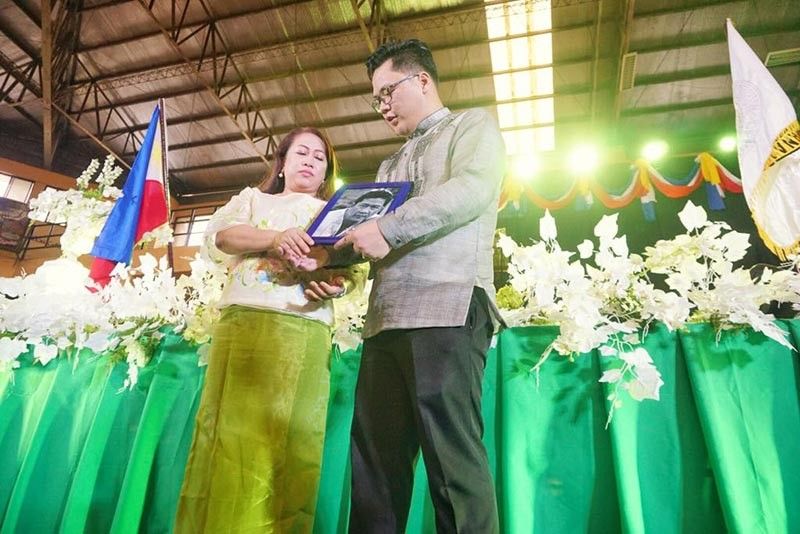 IN MEMORIAM. Ricardo Reluya Jr. (in picture) will always be remembered by his family even in death. San Fernando’s Association of Barangay Councils president and Panadtaran barangay captain was killed along with two others when his wife Mayor Lakambini Reluya (left) was ambushed in Talisay City last January. Ricardo, who was her running mate in the last elections, was replaced by their son Ricci Regens (right), who beat former mayor Antonio Canoy in a close fight. During her inaugural speech, Mayor Lakambini vowed to continue her husband’s legacy of public service. (SunStar Photo/Alex Badayos)

WITH a fresh mandate given to her following the May 2019 midterm elections, San Fernando Mayor Lakambini “Neneth” Reluya vows to improve her town, especially in dealing with its illegal drug problem.

During her inaugural speech at the San Fernando gym on Monday, July 8, 2019, Reluya challenged barangay officials to make illegal drug eradication a top priority during her second term.

Reluya promised barangay officials that she would give a reward to the barangay that will be declared “drug-free” within the year.

Reluya announced big-ticket projects that will soon be implemented, including the P358-million roll-on, roll-off (roro) port in South Poblacion sponsored by the Department of Transportation (DOTr), and the opening of new access roads to decongest traffic along the highway.

Reluya also vowed to immortalize the memory of her late husband, Ricardo Jr. to inspire her and her constituents to make their town a better place to live in.

Her husband was killed along with two others when the mayor was ambushed in Talisay City back in January. Ricardo was running as vice mayor when the ambush occurred.

Reluya said she and her family are resolved to fulfill their election promise to improve the town’s standing.

She also vowed to continue her husband’s legacy of public service.

“Pa, don’t worry. Everyone will remember you,” Reluya said, in her speech.

Reluya also challenged her constituents to do their best to make their town a better place to live in.