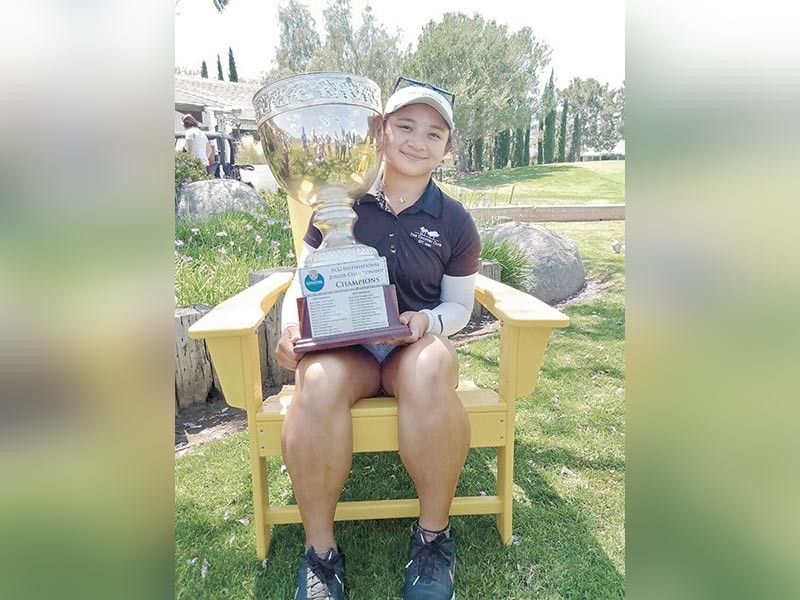 SUPER SUPERAL. Eagle Ace Superal wins in the 12th FCG International Championship in California. She will compete next in the Junior Worlds, which starts on Tuesday. (Contributed Photo )

Superal showed some spunk and pulled through in a pressure-packed finish, hitting a clutch birdie on the par-5 No. 7 for a huge three-shot swing to salvage an even-par 71 and foil Chinese-Taipei’s Chun-Wei Wu by three in the girls’ 13-14 division with a 141 total.

Malixi earlier completed a wire-to-wire triumph in the 11-12 play as the reigning Philippine Amateur Open overall champion fired a 69 and 71 for a 140 and routed US-based Thai Natrada Pongsasin (70-74) and Arianna Lau (71-73) of Hong Kong by four.

Wu matched Superal’s opening 70 and the duo, teeing off at the backside of the par-71 Willow Glen, remained tied with eight holes left in the 36-hole championship before the Taiwanese pounced on The Country Club mainstay bogey on No. 2 to take command.

But after both traded bogeys on No. 5, Superal birdied the par-3 No. 6 from six feet and surged ahead as Wu three-putted for bogey. Gaining control and momentum, the younger sister of former US Girls’ Junior champion Princess, hacked a solid drive on the next hole to set up an easy birdie then watched her rival succumb to pressure and holed out with a 7.

“Ace took a gamble on No. 7, crossing the lake off the mound that left her with 180 yards to the green and made the birdie. It was a bold move but she did it and earned a three-stroke lead,” said Team TCC coach Nestor Mendoza.

Not even a three-putt miscue on the 17th could shake off Superal, who hit a perfect drive on No. 18 and set up an easy par to wrap up her first major junior crown which Princess also won back in 2010. PR