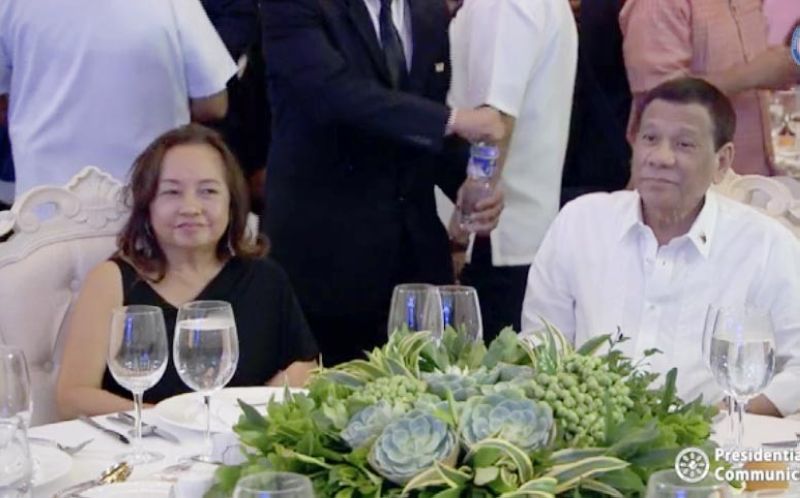 PRESIDENT Rodrigo Duterte cracked another joke, this time about killing people because he thought it would please former President Gloria Macapagal-Arroyo, whom he described as a "true living icon in Philippine politics and an embodiment of strong political will."

During the appreciation dinner for former President and outgoing House Speaker Gloria Macapagal-Arroyo on Tuesday, July 9, Duterte said he sought to emulate the former president's resolve to make the country "stronger” and quipped that he took the initiative of "killing" people to please her.

"Bilib ako sa iyo (I admire you), ma'am kasi (because) you might want to know that even when I was mayor and for the years that President Arroyo was there, I was really working for her," Duterte, who once served as presidential consultant on public safety and order in the Arroyo administration, said.

"Of course, wala akong pinatay na tao na utos niya. Pinatay ko na lang kasi feeling ko gusto niya (Of course, I did not kill a person upon her order. I just killed because I felt that was what she wanted)," he added, drawing laughter from the audience.

Duterte made the joke, even after more than 24 countries and the Amnesty International called on the United Nations to investigate him over the alleged unlawful killings of thousands of suspected drug personalities in the country.

A day before he issued his latest statement, the President said that he would rather face cases for alleged extrajudicial killings in the country than be slapped with corruption charges before the Office of the Ombudsman.

On Tuesday night, Duterte said he thinks highly of Arroyo for her "inspiring and disciplined leadership."

"Perhaps, no other chief executive in our history comes close to President Arroyo's example of carrying out decisive actions, even if such actions would prove to be unpopular. indeed, her intuitive and hands-on leadership has carried our nations forward, especially during trying times," the President said.

"Now, I only intend to make our country even stronger by following her brilliant example of a strong-willed leadership and decisive governance," he added. (SunStar Philippines)