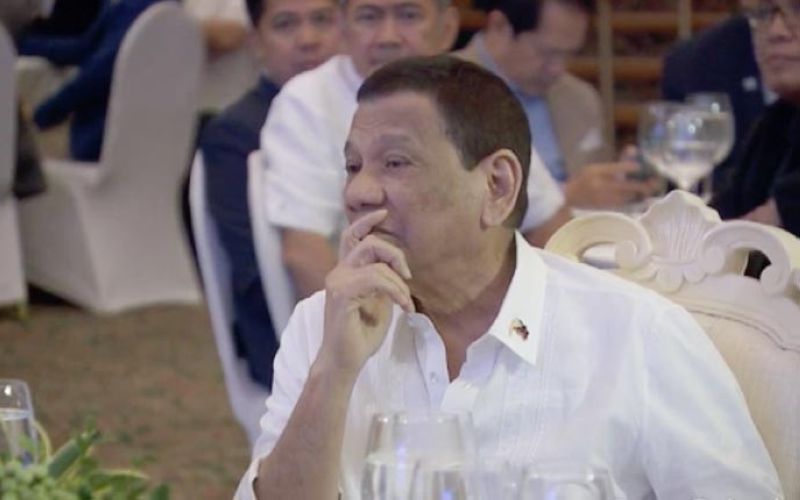 BELIEVING there is an imminent terror threat to the public, President Rodrigo Duterte on Tuesday, July 9, said he wants the armed forces and police to be "strong" before he steps down from office.

In his speech during the appreciation dinner for outgoing House Speaker Gloria Macapagal-Arroyo, the President revealed that he sees "very dangerous times ahead."

"I hope that by the time I make my exit, nandiyan na lahat 'yan because I am not belittling the events to come or the person coming in to be the next president. Hindi ko alam kung sino. And I'd rather that I leave with a strong military and police and equipped to challenge the enemies of the state, especially [those involved in] terrorism," he said.

(I hope that by the time I make my exit, I have done everything because I am not belittling the events to come or the person coming in to be the next president. I don't know who will be my successor. And I'd rather that I leave with a strong military and police equipped to challenge the enemies of the state, especially those involved in terrorism.)

"I see a very dangerous times ahead. And I hope that we will be able to contain whatever there is to really to.. But it... Lumalabas na nga 'yung pawis sa kamay ko (my hands are sweaty) just thinking about if it will go awry outside of Sulu and Basilan Islands," he added.

Mindanao is under martial rule until December 31, 2019. Martial law was imposed after Islamic State-inspired Maute extremists laid siege to Marawi City in Lanao del Sur province on May 23, 2017.

The President, however, did not elaborate on the possible terror threats in the country.

Duterte said he was eyeing to adopt Arroyo's vision for the Philippines as "Strong Republic" when she was still the president.

"When Madam Arroyo was President, she envisioned to make sure the Philippines is a 'Strong Republic. Ganito rin (That's how I envision it also). That's also my sloganeering. I always said that my oath of office, reduce it in a very simple term, is that: I swore to protect the people and preserve the Republic of the Philippines," he said.

The Commander-in-Chief expressed hope that Congress would help him improve the defense capabilities of the state forces.

"So that I said, I must be prepared. Nabili ko na ho 'yung mga kailangan (I have already bought everything they need), but there are still a few things that I must have for my armed forces and the police," Duterte said.

"We have acquired so many armaments. And there were things, kakaunti na lang (that are no longer enough), which I hope that Congress would tide us over to complete instruments that we need in dealing, especially with terrorism," he added. (SunStar Philippines)