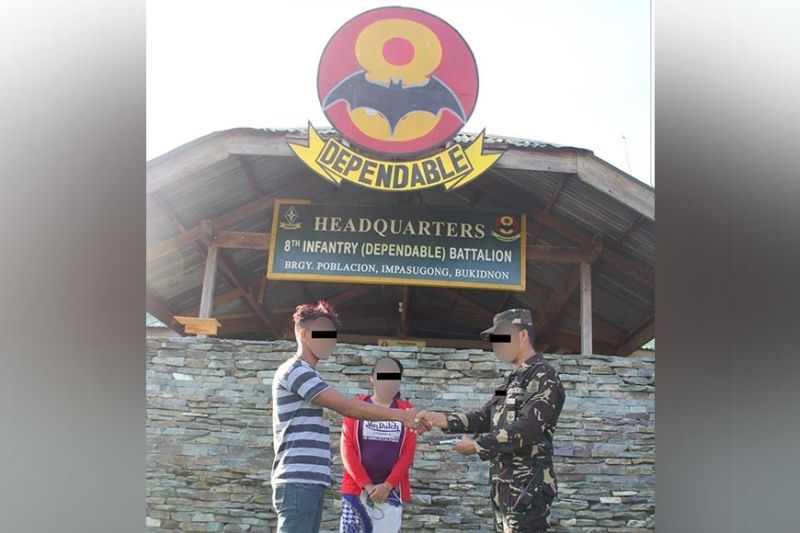 A COUPLE who joined the New People's Army (NPA) as child warriors surrendered in Impasug-ong town in Bukidnon Wednesday, July 10.

The 8th Infantry Battalion (8IB) of the Philippine Army's 4th Infantry Division said the two surrendered in the Army headquarters and they are said to be the sixth couple to yield since 2018.

The surrenderers were identified only with their aliases Koko and Kenny.

Koko is now 22 years old but said to have joined the NPA when he was 17. Kenny, now 19 and pregnant, also joined the rebel group at age 15.

"The said couple warriors got married while they were in the NPA group of the Regional Sentro De Grabidad Compaq, North Central Mindanao Regional Command (RSDG Compaq, NCMRC)," the statement from 8IB said.

"They got a chance and escaped NPA and immediately surrendered themselves to this Army unit bringing a Caliber 45mm loaded with bullets," it added.

In an interview, Koko revealed how they evaded the RSDG, saying: “The NPA forced us to join them and I was scared at that young age. We got married by the NPA commander with my wife and now that she is four months pregnant, we decided to visit a clinic for a medical check as a reason, which was approved by the commander, so we immediately leave and run to 8IB.”

“Now that I am in my right age, I realized that we are not secured there due to non-stop military operation of the Army troopers. I don’t want to die there. The group is in disarray and we lost our mass supporters. We are isolated in the hinterlands which make it hard for us to find our food and seek medical help," he said.

“We will help them to file cases against the NPA personalities who forcibly recruited them. They joined the group at a very young age and that’s a violation to their rights,” said Lieutenant Colonel Ronald Illana, the commanding officer of the 8IB.

“To the remaining members of the NPA groups in Bukidnon, we are calling for your surrender and abandon the lost cause of the CPP-NPA-NDF," he said.

The couple will be assisted by the Army unit and local government unit of Impasug-ong, Bukidnon for their medical checkups and enrollment to E-Clip for their benefits, including the payment of the caliber 45mm, which they brought.