To build the duomo, workers had to transport quarried marble from Candoglia through miles of man-made canals. (Photo by Crystal Neri) 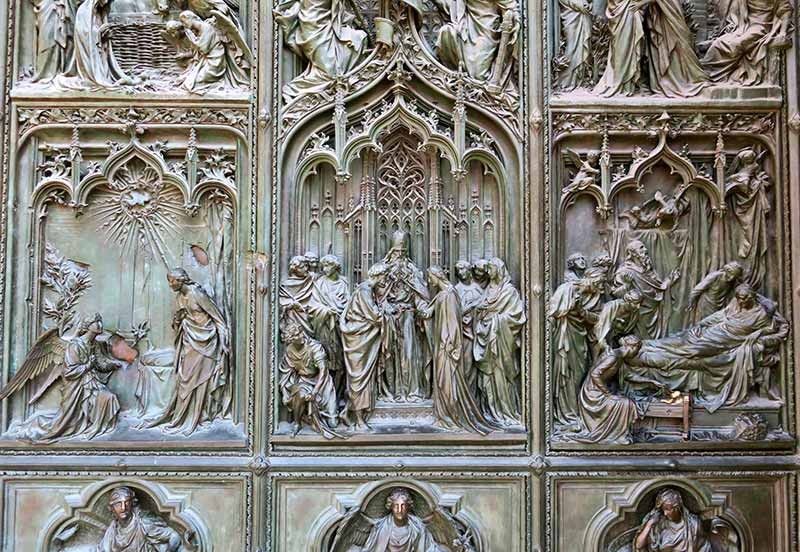 ZOOMING IN. One of the five large bronze doors that flank the Duomo. (Photo by Crystal Neri) 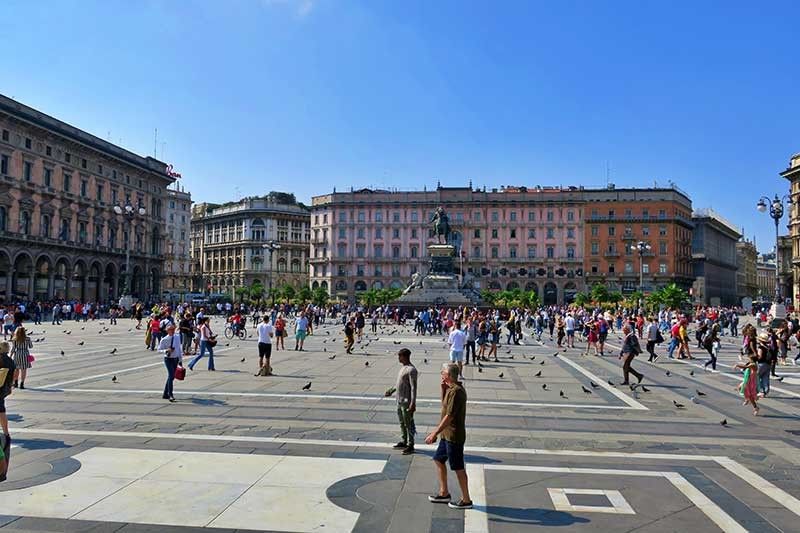 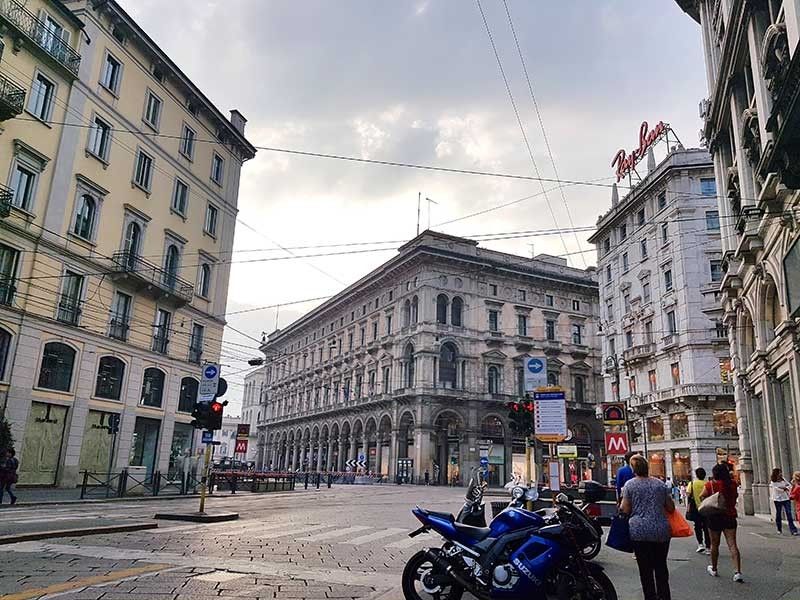 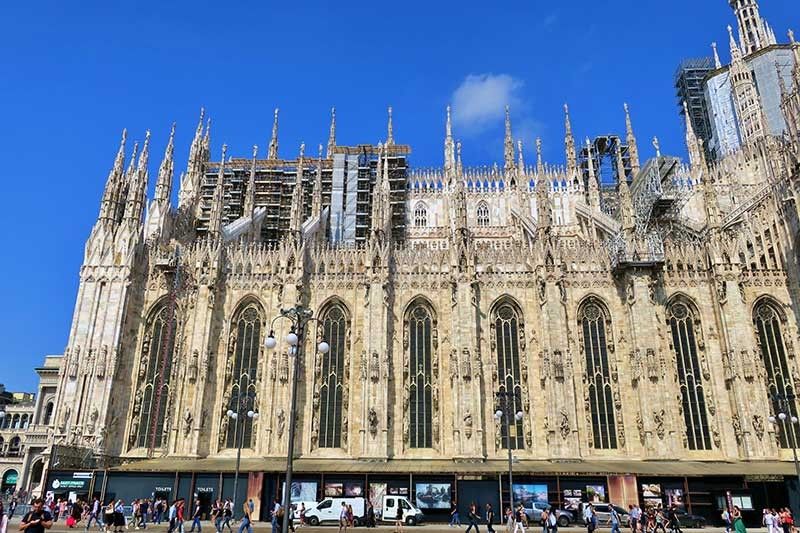 LARGER THAN LIFE. As one of the world’s biggest cathedrals, the Duomo can fit two football fields meant to house 40,000 worshippers. (Photo by Crystal Neri) 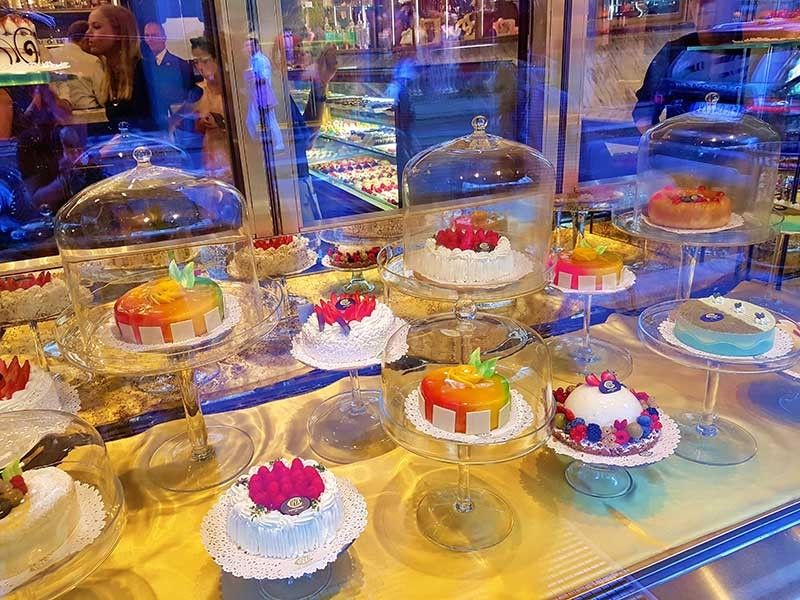 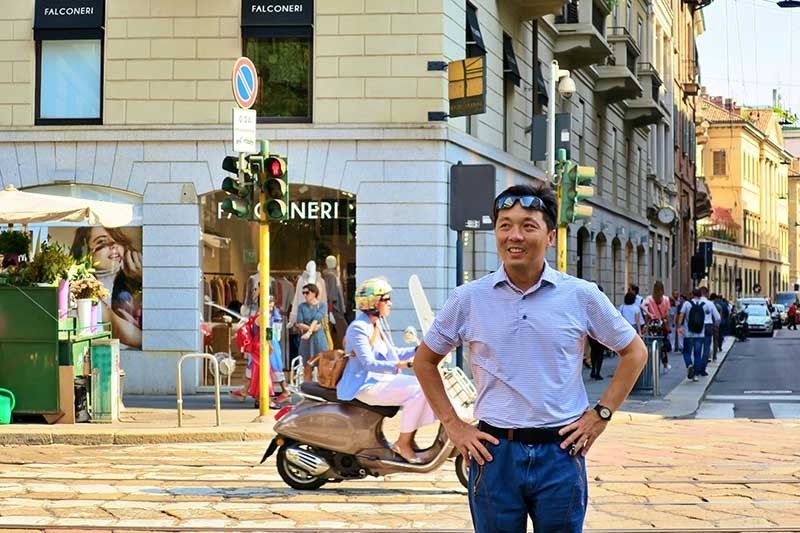 My husband Jovi at the Quadrilatero della Moda (fashion quadrilateral), home to the world’s most celebrated brands and high-ticket establishments. (Photo by Crystal Neri) 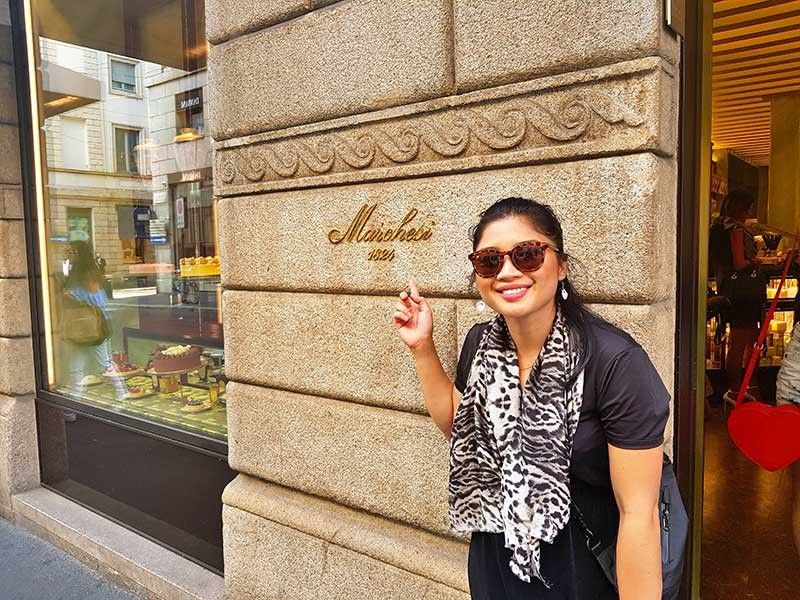 A TALL, impossibly thin girl dressed in high-waisted denim cutoffs and a plaid blazer passed in front of me and my husband, her skin glowing and patent boots thumping. The three of us were walking along Alessandro Manzoni, a narrow cobblestone street in Milan.

“She’s a model for sure,” I told Jovi, a hunch based on my experience seeing models in art school.

When more stunning girls started walking around us–donning red snakeskin print skirts and colorblock belt bags–I realized we were not just walking any normal street in Milan. We were right by Armani SPA, the brand’s eponymous luxury health and wellness center.

When Jovi and I arrived in Milan, we did not expect a lot. This was just a two-day stopover on our tour of Europe. Most tourists would describe the metropolis as too modern–perhaps that’s why most prefer the old-world beauty of Rome or Florence. We had not anticipated though, the surprises that Milan had for us, starting with a street brimming with off-duty supermodels straight from Vogue.

There’s more to Milan than getting a chance encounter with Armani models. Located in the northern part of Italy’s Lombardy region, the ancient Romans discovered the city in 222 BC and named it “Mediolanum”, meaning the place in the middle, for its strategic location in Italy’s plain.

Today wealthy Milan, whose streets are lined with pinkish-hued buildings and exotic palm trees, is the country’s center of finance, commerce, media, and fashion. Described as Italy’s “crucible of chic”, we figured there’s no better way to spend our first day in Milan than to take a walking tour of the fashion district, Quadrilatero della Moda.

We started at the heart of Milan, Piazza del Duomo. I saw the landmark for the first time in the Pinoy romantic film Milan starring Claudine Barretto and Piolo Pascual. Just like in the movie, hundreds of pigeons covered people’s feet. I made a note to go inside Milan's majestic cathedral (Duomo) at a less busy time.

A quick turn got us to the four-story Galleria Vittorio Emanuele II. I was dazzled! Built in the late 19th century, the shopping arcade is the world’s oldest shopping mall and one of Italy’s most exclusive. All stores and restaurants, from Gucci to McDonald’s, follow a uniform black column and gold scheme. As we walked toward the building’s octagonal center, we found tourists spinning, one foot on the mosaic gallery floor, right on a bull’s genitals. I twirled away too, as tradition says it will bring me luck.

Next up was Via Montenapoleone, one of the world’s most exclusive shopping streets. On my luxury wishlist is a Hermès silk scarf that retails for about P20,000. I thought, “Why not touch and feel it in person in Hermès Milan?” We couldn’t afford shopping for glittery goods, but our budget did allow for edible works of art – pastries. Marchesi and Cova, the two Milanese patisseries that have a legendary pasty war, are conveniently located nearby. Cova won us over with its €3 vintage gelato cart waiting by the door.

Aside from fashion and pastries, Milan’s unmissable feature is the Duomo. Started in 1386 by the ruling Visconti family, the grand French Flamboyant Gothic cathedral took over six centuries to complete. It's one of the biggest churches in the world meant to house 40,000 worshippers.

To build it, workers had to transport quarried marble from Candoglia through miles of man-made canals. The marble gleams the colors of rose, ash, and snow in daylight. Facing the prickly facade felt like solving a visual puzzle: it has more than 3,000 statues, 135 gargoyles, and 700 figures. The church was topped with a gold-colored Madonna, the symbol and patroness of the city.

I went alone inside the Duomo on a weekday morning devoid of tourists. As soon as I entered, I was struck by the 52 massive pillars surrounding me, each one a hundred feet tall. The interior was softly-lit by sunlight coming through the painted windows, one of which was built during medieval times using baked-in glass. Far ahead, a small red light in the dome above the apse marked the box of nails used during Jesus’ Crucifixion. As soon as I saw that, I cried.

Maybe it was the low, steady hum of prayers in Italian. Or perhaps the peaceful energy, the sense of safety, the perfect notion of grace and blessing coming upon me for visiting a church so old and rich in history. I realized I have been on this long journey dreaming of exploring Europe since college, only to make it as an older, married person. I bowed my head in reverence and looked for an empty pew. As I sat still, I felt so much gratitude and cried and wept for joy.