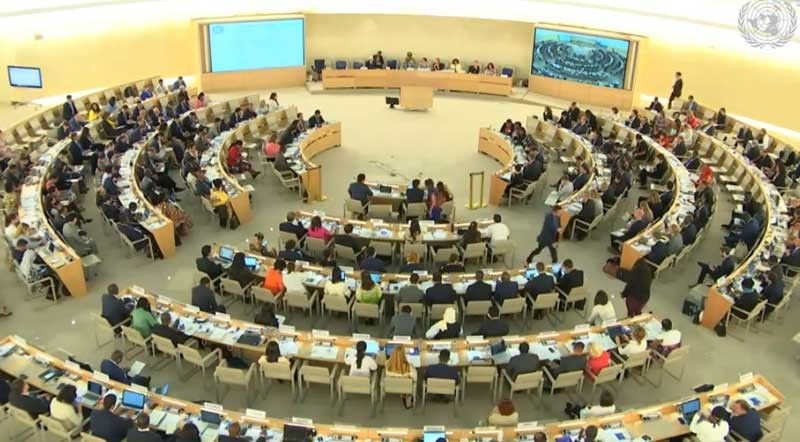 THE United Nations Human Rights Council on Thursday, July 11, voted to adopt the Iceland-led resolution calling for a "comprehensive report" into the human rights situation in the Philippines and hold the perpetrators of alleged abuses accountable.

During the council's 41st regular session, 18 member-countries voted Yes, 14 voted No and 15 abstained.

The resolution, submitted by Iceland and backed by more than two dozen countries, asks UN High Commissioner on Human Rights Michelle Bachelet to come up with a "comprehensive" written report on the Philippines' human rights situation.

The resolution also urges the Philippines to "take all necessary measures to prevent extrajudicial killings and enforced disappearances" and carry out "impartial investigations and to hold perpetrators accountable in accordance with international norms and standards including due process and the rule of law."

A few hours before the voting was held at the UN, President Rodrigo Duterte said he welcomes a possible investigation by the UN on the alleged human rights abuses in the country.

"Who's gonna make it? Bahala sila. Kung ako magtrabaho, hindi ako (Let them be. If I do my work, I won't)... That's crazy but they can," Duterte told Palace reporters in a chance interview.

The President said he would allow the UN to visit the country and conduct an investigation into his drug war, if it could provide an "acceptable" reason.

"Let them state their purpose and I will review it," he said, when asked if the UN can come to Manila to probe his anti-narcotics drive.

"Kasi kung mag-dagdag lang sila sa intriga (If they will only sow intrigue), they better go to the media and the media will tell them the truth. Eh ipalabas ninyo ‘yung footages ninyong lahat (Show your footages) and all, and that will clear everybody," he added.

Prior to the President's latest statement, he said on July 8 that he would rather be accused of committing extrajudicial killings (EJKs) rather than corruption. (Ruth Abbey Gita/SunStar Philippines)