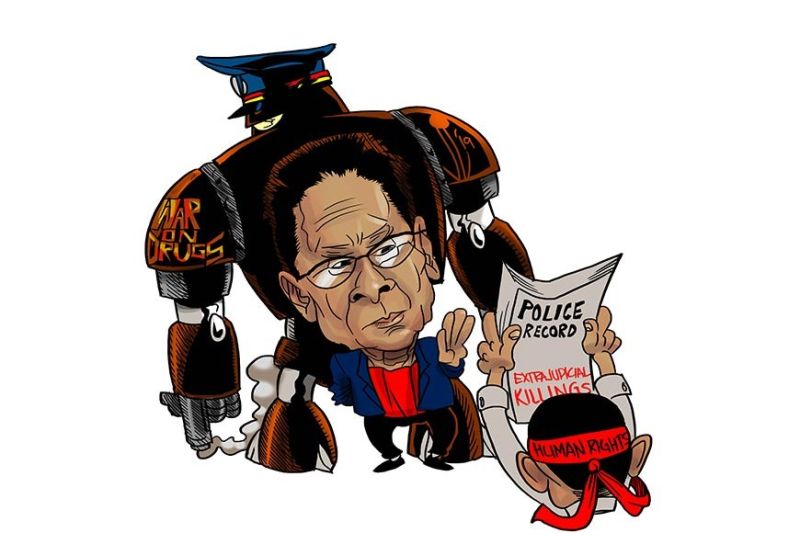 THIS week, the Social Weather Stations (SWS) released its latest survey on the satisfaction rating of President Rodrigo Duterte’s performance. The survey, taken from June 22 to 26, saw that 80 percent of adult Filipinos are satisfied, and only 12 percent were dissatisfied. In all, it registered a net satisfaction score of “very good” +68, a record high.

This week, too, Amnesty International (AI) released “They Just Kill,” its second report on the Philippine government’s crackdown on illegal drugs. The first one came out in 2017. The recent report only has the strongest words. It regarded the government’s drug war as “nothing but a large-scale murdering enterprise for which the poor continue to pay the highest price.”

The report said government created a “drug watch list” outside the legal process, and just went about with total impunity murdering people in poor neighborhoods.

While the Philippine National Police reports say 6,600 “drug personalities were killed from July 2016 to May 2019, or an average of six a day, the AI believes it may be impossible to gauge the real damage of the drug war. Government responds to every inquiry by spewing all sorts of mind-boggling obfuscations and vagueness. It has, in fact, not moved an inch on the pending Supreme Court order to turn over documents in relation to the drug war to independent bodies.

Consequently, the AI is asking the United Nations (UN) to “immediately open an investigation into gross human rights violations and possible crimes against humanity committed as part of the ‘war on drugs.’”

Meanwhile, we recall the throat-cutting gesture the President did while warning “drug addicts” about their dark fate in one of his impassioned speeches. As usual, a large part of the audience would be roused into laughter and wild cheering, matched with the ear-splitting chant: “Duterte! Duterte!”

If anything, while this illustrates a wide public endorsement of the ways this government is waging its war against illegal drugs, as reinforced by the SWS survey, it also indicates an aberrant attitude to the old notions of respect for human rights. That, or there is apparent ignorance or misunderstanding of them.

The SWS survey, incidentally, may be used as baseline data to determine the level of knowledge and comprehension the public has on the values of human rights. That it is precisely this ignorance that emboldens the government’s doggedness in the drug war and that which keeps it popular.

Human rights education is an act of empowering citizens, to drag them out of Plato’s allegorical cave or, to be more current in the metaphor, out of the matrix.