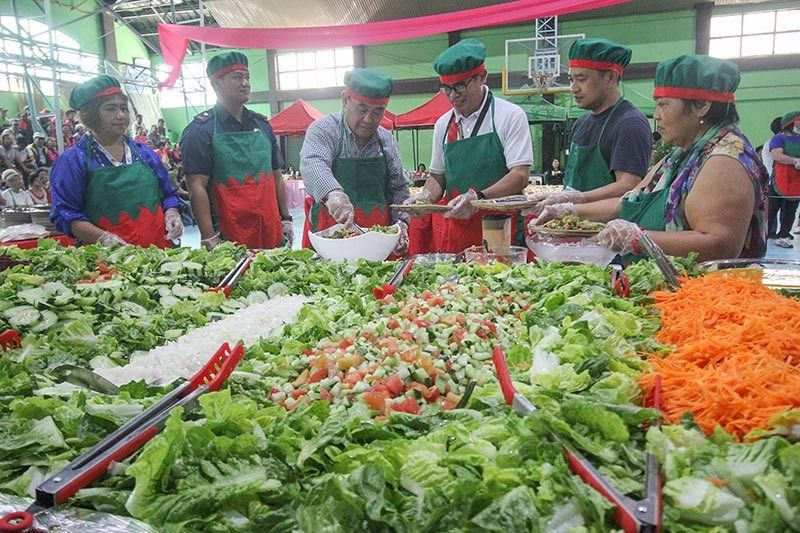 SOME 700 kilograms of fresh highland vegetables with balsamic and mango dressing were distributed among guests and stakeholders in Benguet's capital town, La Trinidad as part of the three-day celebration of the Highland Vegetable Industry Week.

Mayor Romeo Salda said this year's celebration is the first in the town as it was finally institutionalized through an ordinance by the Municipal Council.

Under Ordinance no. 31-2018, every second week of July is observed as the Highland Vegetable Industry Week in the town to recognize the contribution and importance of the highland vegetable industry.

In the past, 300 kilograms and 1.2 tons of vegetable salad were served during the celebration of La Trinidad Trading Post Founding Anniversary.

Nora Ganase, president of the League of Associations in La Trinidad, said the league with 13 associations composed of farmers, traders, packers and truckers, donated vegetables. The ingredients for the dressing were purchased.

The 700-kilogram salad was made of carrots, red sugar bits, cucumber, lettuce, onions, and tomatoes.

The La Trinidad Vegetable Trading Post was established on July 13, 1984 to spur the economic development of the town as it had become the trading center of vegetables for Benguet province and the Cordillera region.

Cameron Odsey, officer-in-charge of the Department Agriculture Cordillera, congratulated the municipality and the vegetable traders associations for the initiative.

Odsey said the activity is hoped to further promote the vegetable industry in the region.