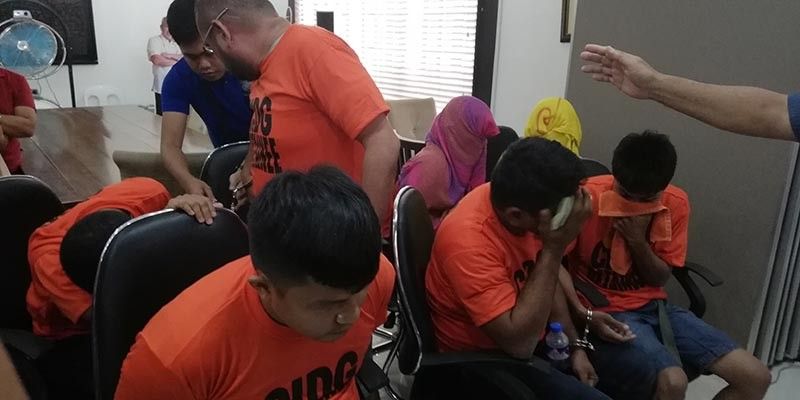 CAGAYAN DE ORO. The robbery extortion suspects presented to the media by the Criminal Investigation and Detection Group in a press conference Monday, July 1, 2019. (PJ Orias)

AGENTS of the Criminal Investigation and Detection Group (CIDG) in Northern Mindanao arrested seven persons on Thursday, July 11, for extorting at least P1 million from Mayor Oscar Moreno in exchange for his son's freedom.

Mabbora was the one who reportedly made a call to Moreno for the negotiation deal.

In a press conference, Moreno said he received a call last July 9 from Mabbora, who introduced himself as Colonel Sifuentes, the deputy director for operations of Police Regional Office-Northern Mindanao.

The first call was an introduction, telling Moreno he was a classmate of a certain Colonel Llanera, the deputy director for operations in Angeles City, Pampanga, where the mayor's son -- Sean Moreno -- was arrested over drug charges.

Moreno said the suspect asked him P1.5 million at first, but he was able to negotiate and reduce it to P1.3 million. Moreno also disclosed he already had doubts as to the voice of the caller, saying it sounded too young for a colonel.

Moreno then called Sifuentes himself, using another number and told him about the incident, where the mayor confirmed that the caller was a fake one.

Two days later, the CIDG agents zeroed in on the seven suspects, five of them arrested at a café in Limketkai Mall, while the two others were collared in a mall in Barangay Puerto, Cagayan de Oro City.

The suspects are facing robbery extortion charges, with Moreno as the complainant.

Police Lieutenant Colonel Raymund Liguden, CIDG-Northern Mindanao officer-in-charge, said Mabbora served as the leader of the group with the others as mere lookout.

Liguden said this syndicate, although relatively new, might have already victimized some other groups.

"I thank the CIDG for taking immediate action. It was not easy. This is not the first, sigurado ako na marami na silang ginawang operations," Moreno said.

"This press con was meant to expose them to prevent from victimizing other persons, pretending to arrange or solve problems. It is well organized kaya mabuti naman magaling ang ating CIDG. Sinasakyan nila yung problema ko in the hope I would give in. But certainly, mahirap din naman patulan ko. I'm very happy nasolve ito. Salamat once again for this very quick solution," Moreno said.

It can be recalled that Sean Moreno was arrested over drug charges in Angeles City, Pampanga in the later part of June this year.