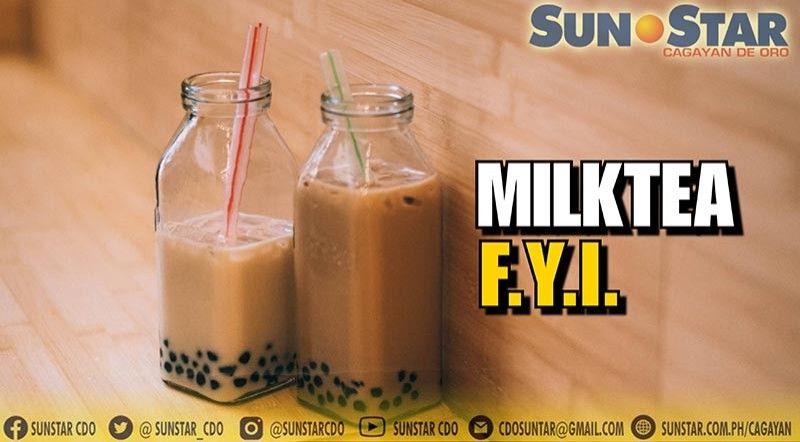 SOME people think of drinks with “tea” in it has to be healthy, after all tea has several health benefits such as containing antioxidants, helps regulate blood sugar, supports mental health, aids digestion, among others.

As such, when the milk tea became the go-to trendy drink in this recent decades, people grew to love the drink thinking that not only it’s delicious but also “healthy,” that carries some double the benefits, so to speak.

And yet, the Nutrition-Dietitians Association of the Philippines (NDAP) says otherwise.

NDAP’s vice president for Mindanao Nita Antipuesto revealed on Monday, July 15, that drinking tea or coffee with milk is not a healthy combination.

She said tea and coffee are high in phosphorus, a mineral that makes up to one percent of a person’s total body weight and the second most abundant mineral in the body.

The young generation may not immediately see how it will affect their bodies, Antipuesto said, however, when they get older signs of osteoporosis will start to appear.

Osteoporosis, as we all know, is a disease in which the density and quality of bone are reduced. It occurs when there is an imbalance between new bone formation and old bone resorption.

The body may fail to form enough new bone, or too much old bone may be reabsorbed, or both. Two essential minerals for normal bone formation are phosphate and calcium.

The NDAP Mindanao vice president also shared that always drinking milk tea is one of the factors of overweight and obesity.

According to the National Nutrition Council-Northern Mindanao, the prevalence rate of overweight and obesity in the region is increasing, with Misamis Oriental recording the highest prevalence rate.

There are also studies done outside the country that prove that mixing tea with milk may result in a number of negative effects.

Based on the study of a team of researchers in Charite Hospital at the University of Berlin in Germany, milk also eliminates protective effects of tea against cardiovascular diseases.

They discovered that milk proteins called caseins reduce the efficiency of the tea compound called catechin, which protects the heart from diseases.

Another 2002 study of Richard Anderson and Marilyn Polansky of Beltsville Human Nutrition Research Center in United States also found that adding 50 grams of milk per cup of tea decreases insulin activity by 90 percent.

Insulin activity is an action of a substance where the blood glucose (sugar) level in humans is lowered.

When tea’s insulin activity is reduced, the body’s protection against diabetes also decreases.

Does this mean people should stop drinking milktea and milktea establishments should close?

Antipuesto said those who are fond of drinking milktea may drink the beverage for only three glasses a week. On the other hand, for those who drinks purely tea or coffee, she said you have them two glasses or cups a day.

“Why not they just take the tea nalang separately with the milk? That’s the healthy way,” Antipuesto said.

“Whether we like it or not, in delicious foods, there are lots of things,” she added.