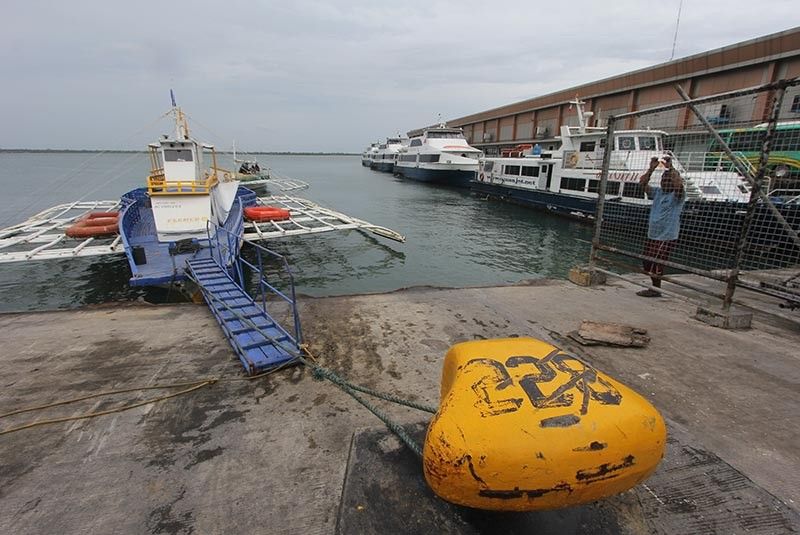 QUIET. Several fastcraft and motorbancas are anchored at the Cebu port following the cancellation of trips due to the rough seas felt in Cebu on Tuesday, July 16, 2019. (SunStar Photo/Amper Campaña)

DESPITE the absence of a gale warning from the state weather bureau, operators and owners of shipping companies cancelled boat trips in Cebu, Camotes, Bohol and Ormoc Tuesday, July 16, 2019.

A total of 32 boat trips, including of motor bancas and fastcraft, were cancelled while 501 passengers were stranded in the port of Cebu as of Tuesday afternoon.

The Philippine Atmospheric, Geophysical and Astronomical Services Administration (Pagasa) in its 6 p.m. advisory said Tropical Depression “Falcon” had already intensified to a Tropical Storm as of 4 p.m. Tuesday, and was traversing westward to Tuguegarao City, Cagayan.

Cloudy skies with scattered rainshowers and thunderstorms due to the southwest monsoon or Habagat will be felt in some parts of Visayas including Cebu on Tuesday and Wednesday, Pagasa said.

Due to the rough seas, cancellation was done from 6 a.m. until 6 p.m., the Cebu Port Authority Police-Operations Center posted on its Facebook account.

Cancelled trips included those on routes from Cebu to Tagbilaran, Loon and Getafe in Bohol; Cebu to Camotes; Cebu to Ormoc, Leyte; Cebu to Cadiz and Estancia in Negros Occidental and Cebu to Masbate.

Boats trips from Ubay, Bohol to Bato and Hilongos in Leyte were also cancelled and trips from Inabanga, Bohol to Cebu.

Meanwhile, the Mandaue City Police Office and the City Disaster Risk Reduction and Manaagement Office (CDRRMO) intensified their monitoring on the city’s major rivers and waterways particularly Mahiga creek, Butuanon River and the rivers in Barangay Casuntingan and Sitio Lub-ang.

The call came after Cebu City Mayor Edgardo Labella ordered the Cebu City Engineering Office to put concrete lids on all manholes and not to use steel plates after a five-year-old fell to his death in Barangay Basak Pardo on Saturday, July 13.

The boy was not found until 27 hours later on Sunday afternoon.

Tribunalo said town and barangay officials should be knowledgeable about the water flow entry and exit points in their areas to avoid clogging up waterways.

Tribunalo said he plans to ask Gov. Gwen Garcia if he could join ocular inspections in flood-prone areas in the province. (RTF/from HBL and ANV of SuperBalita Cebu/VLA)