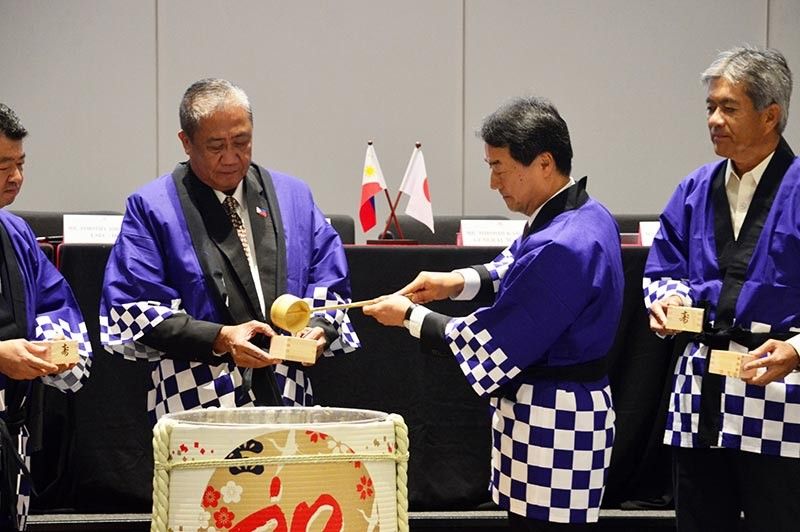 A Sake Barrel Ceremony, “Kagami-biraki,” was performed during the contract signing of the Package 3 of the PNR Clark Phase 1 (Tutuban-Malolos) to further invite harmony and good fortune in the project implementation. (Photo by PIA-Central Luzon)

DOTr Secretary Arthur Tugade and Sumitomo Corporation Social Infrastructure Business Division general manager Hiroshi Karashima signed the contract for the manufacture and delivery of rolling stock for the 37.6-kilometer railway that is expected to reduce travel time between Manila and Malolos City, Bulacan from over one hour and 30 minutes to 35 minutes once it is fully operational.

“This is the reason why we are all here today - to sign an agreement where the trains you see, the prototype you see, will come into fruition by 2021. The first agenda is to come to an agreement and principle that we will strive to work together so that we will realize the Tutuban to Malolos route by the end of 2021,” Tugade said.

The project will acquire a rolling stock fleet with a total of 13 trainsets. Each trainset has a total of 8 vehicles/cars. The rolling stock was designed to have a passenger capacity per trainset of 2,242 passengers (seating and standees).

Contract Package 1 of PNR Clark Phase 1 was signed last May 20, 2019. It covers the construction of six stations namely Solis, Caloocan, Valenzuela, Meycauayan, Marilao and Bocaue and a depot.

PNR Clark Phase 1 will be connected to PNR Clark Phase 2 (Malolos-Clark), and PNR South Commuter forming one integrated commuter railway system that will serve commuters travelling to, from, and within Metro Manila, Central Luzon and Calabarzon.

Relative to this, the Philippine government and the Asian Development Bank (ADB) have signed earlier this month a US$1.3-billion loan agreement representing the first tranche of the US$2.75 billion financing for the construction of a 53.1-kilometer passenger railway that will connect Malolos City to Clark International Airport in Pampanga.

This line will reduce travel time from Manila to Clark to less than an hour from the current time of 2 to 3 hours by car or bus.

The estimated total project cost is US$6.139 billion, which will be co-financed by the ADB and the Government of Japan through the Japan International Cooperation Agency. (PR)