The price of la dolce vita 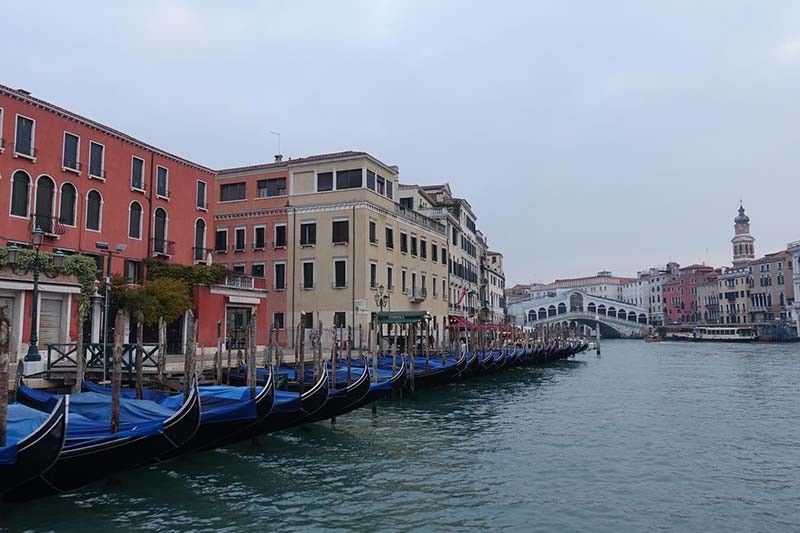 RIALTO BRIDGE. The oldest of the four bridges that span the Grand Canal, it traverses the canal’s narrowest point and is the main pedestrian crossing between the canal’s banks. (Photo by Kristin Aldana-Lerin) 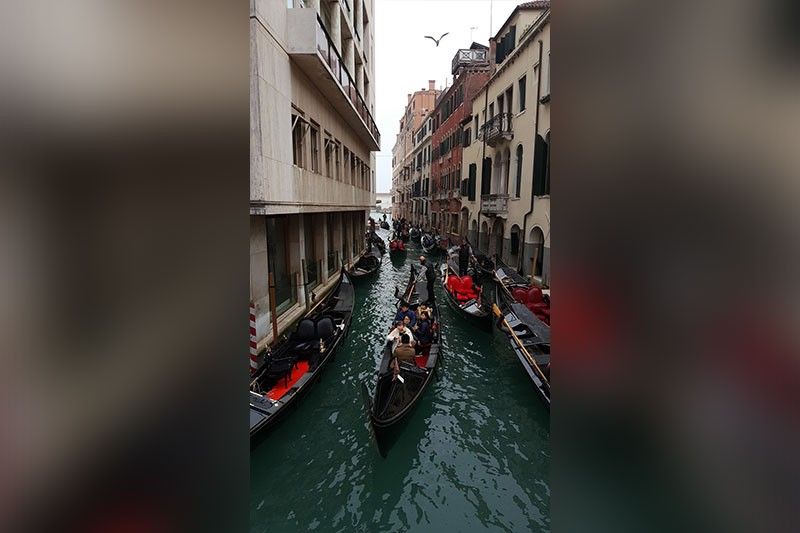 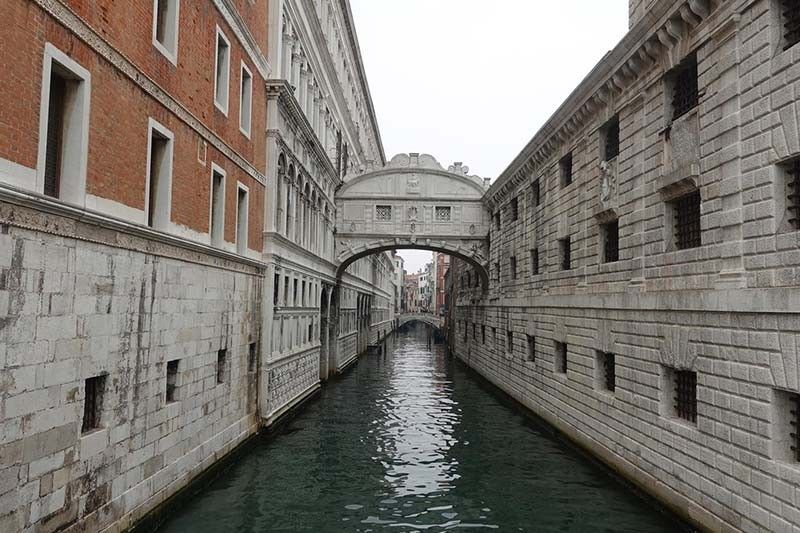 BRIDGE OF SIGHS. Lord Byron translated the bridge’s Italian name, Ponte dei Sospiri, in his poem Childe Harold’s Pilgrimage. Connects the interrogation rooms in the Doge’s Palace to the Prigioni Nuove, or New Prisons. Convicts are said to get a last glimpse of Venice from its windows before imprisonment, hence the origin of its name. (Photo by Kristin Aldana-Lerin) 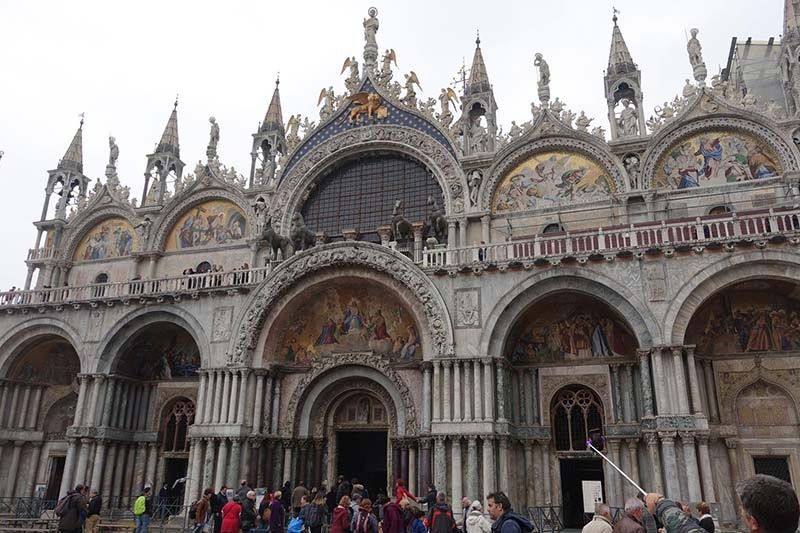 St. Mark’s Basilica, also known as Chiesa d’Oro, or Church of Gold. Its mosaics are mostly in gold. (Photo by Kristin Aldana-Lerin) 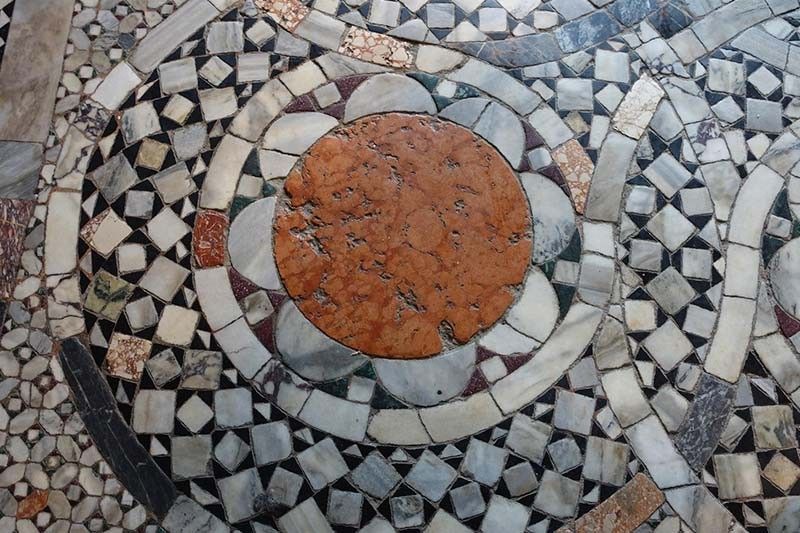 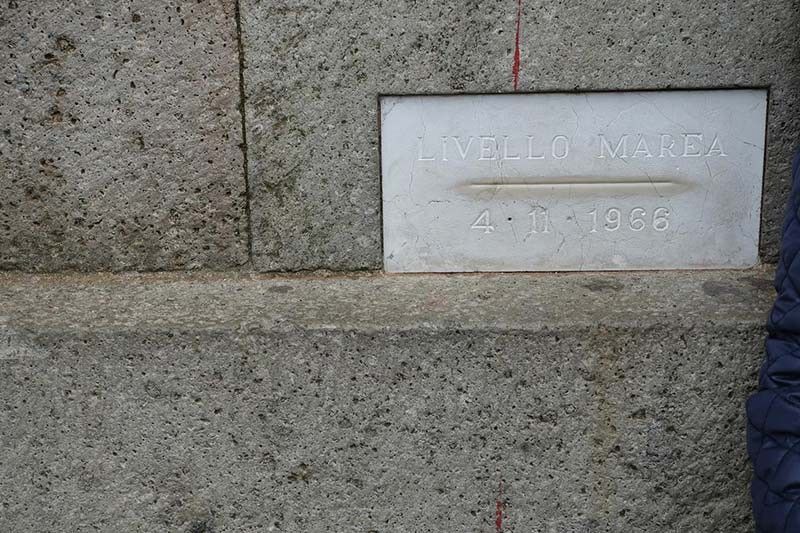 LIVELLO MAREA. Mark at the side of the Campanile recording the water level during Venice’s largest flood on Nov. 4, 1966. (Photo by Kristin Aldana-Lerin) 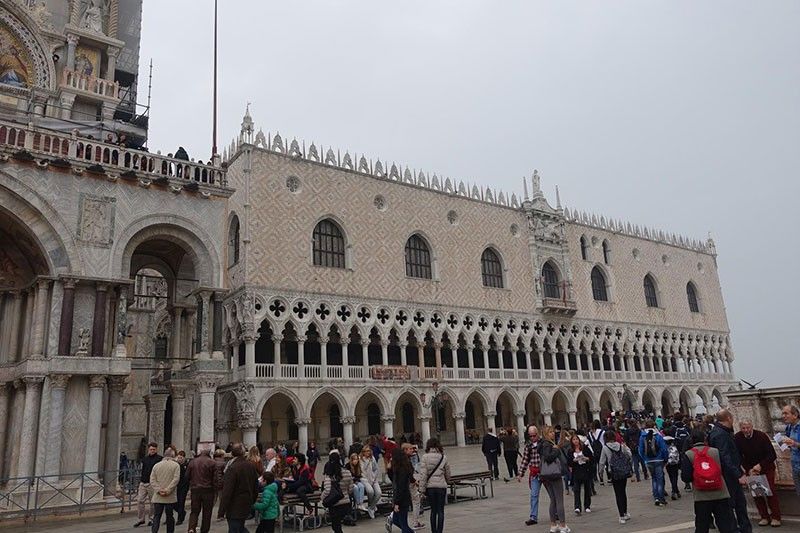 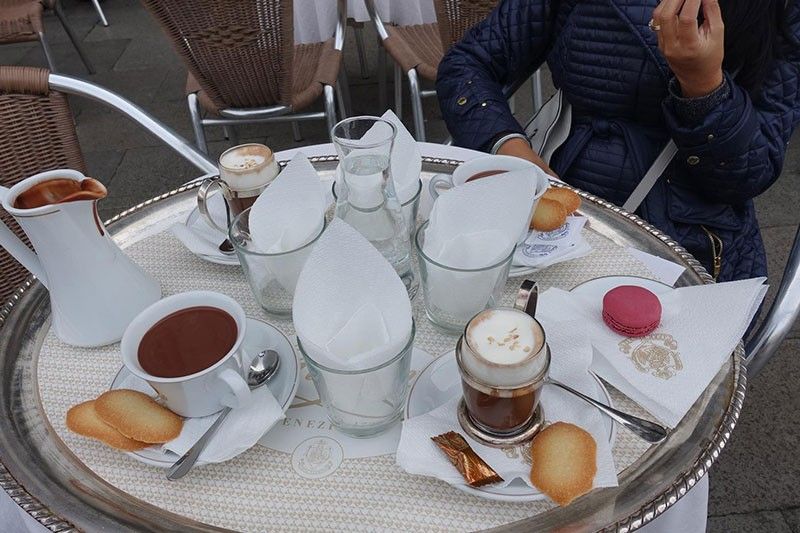 CAFFÈ FLORIAN. Indulge in a little bit of la dolce vita while sitting at an outdoor table, watching the day unfold at Piazza San Marco. Opened in 1720, at the time, it was the only meeting place that admitted women, purportedly why Casanova favored the establishment. (Photo by Kristin Aldana-Lerin) 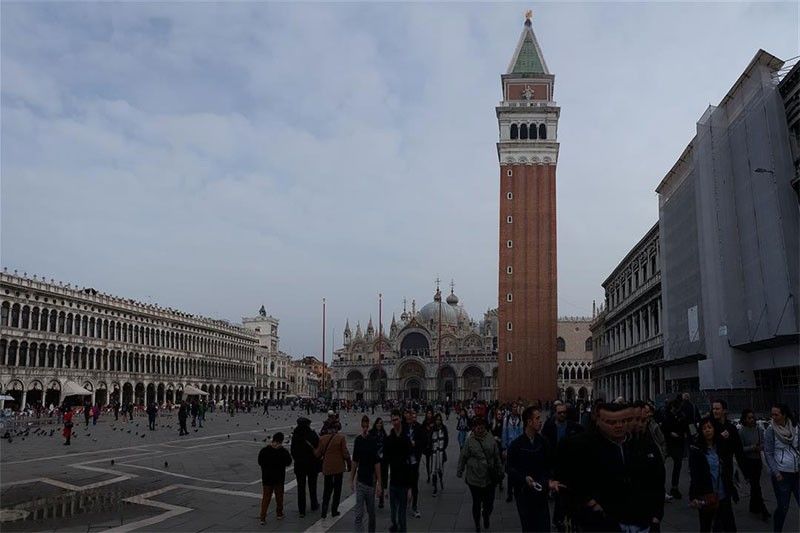 For two coffees, a hot chocolate, cup of tea and a macaron. Almost as much as lunch.

Maybe too much. But on some days, I guess you need to close your eyes to smell the coffee.

Or hear the music. Played by the all-day orchestras dueling somewhere in Piazza San Marco.

Or imagine. How Caffè Florian buzzed as it opened in 1720, when coffee was the trendy new thing in town. And if regulars Casanova, Goethe, Proust, Byron and Dickens thought the same as you, when they finally got the bill.

Or listen. As the bronze moors atop the Clock Tower swing their clappers to mark the hour. Or how below them, the world’s first digital clock quietly keeps track of minutes in increments of five.

Or savor. The picture-perfect moment couples beeline towards St. Mark’s Basilica, sending pigeons in a flapping frenzy across the town square.

Or marvel. At St. Mark’s Basilica opulent like no other, all at once East-West-Roman-Greek-French-Byzantine-Muslim, glowing golden with mosaic. While paces past it, the Doge’s Palace glimmering pale pink, peeking behind the rebuilt Campanile.

Ambivalence fades. The bill on the silver salver now a magic twofer, front row seats with refreshments to the hottest show in town: A Day in the Life of Venice. A show so hot, even Peter Parker wanted in on it. You toss down plastic like a gauntlet, challenging the uppity cameriere, “Charge it, Signore, veloce per favore!”

La dolce vita costs, but oddly in Italy, you’re more than happy to pay for it.

Standing in St. Mark’s Basilica, you will be as close as you will ever be to St. Mark.

Remains rescued by Venetian merchants in Muslim-occupied Egypt, the evangelist’s bones were hidden in plain sight from guards under a pork barrel and taken to Venice. A church was built to house the relics now safely ensconced at the high altar.

You walk out of the Basilica in tears, not exactly sure over what. For the complexly-tiled floor and the talent of the hands that laid them? For the mosaics as detailed as paintings and the visionary minds that birthed them? For the truth that only God moves man to fashion beauty that surpasses all understanding? Feeling too much, the heart wells up in tears, stinging eyes, staining cheeks, burning skin.

A furrow at the side of the Campanile marks the highest recorded alta acqua, or high water, a seasonal phenomenon of tide, south winds and long waves rolled into one. In 1966, with waters rising around six feet during Venice’s largest flood, the only way duckboards, low tables used as walkways, would’ve made sense is if they were laid end to end then stacked way up high as well.

Towards the lagoon, you imagine the chaos in this once popular party town, when weeks-long Carnevale drew nobles from Europe hot and heavy for all sorts of illicitness done under the cover of colorful masks.

While you may decide nada on the Prada this time around, gelato in Venice is always a go go go. Even in the dead of winter. Since you’re in gloves anyway, opt for a double scoop, one for each of the top bestsellers, at places like Gelateria Cà d’Oro Venezia.

Meander winding streets and narrow alleys where quaint shops of masks, stationery and sweets stand side by side high fashion boutiques.

Beware though of the mild-mannered man sweetly proffering long-stem roses. The flattering “Awww shucks, for me?” moment can quickly escalate into a heated argument once you realize the flowers aren’t actually free and your admirer is really a vendor with a strict no-return policy. Mary Jane Watson was sure onto something, cutting off with a firm “Boh!” right from the very start.

Wine is pretty serious business in these parts. An icy glass of Coke ordered with dinner draws dagger looks from the waiter. No brownie points either for the repentant switch to freshly-squeezed orange juice. If looks could kill, I’d be sprawled on the osteria floor somewhere between coffee and dessert.

But no matter, I would gladly pay for some panna cotta, tiramisu and affogato, even if all three at once, would still not cover the price of redemption.