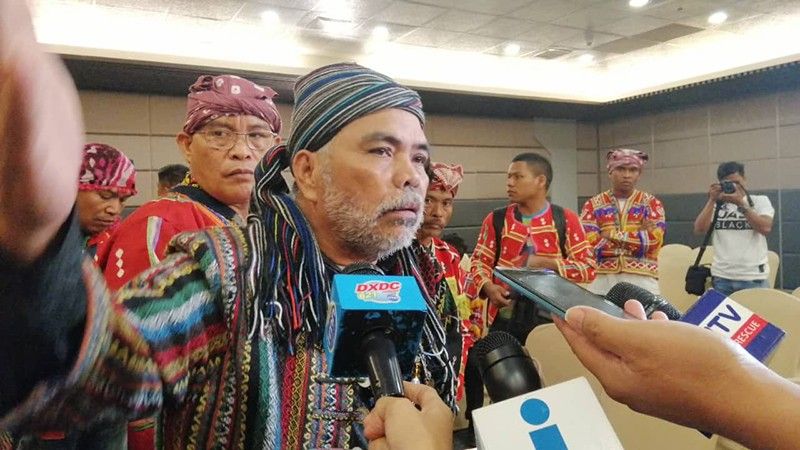 Mindanao Indigenous Peoples Conference for Peace and Development (MIPCPD) chairman Datu Lipatuan Joel A. Unad said the IPs are continuously seeking the help of the Philippine Army through National Security Adviser Secretary Hermogenes Esperon Jr. because the presence of Salugpungan and its owned and operated schools is now deemed a "national security threat issue."

"Dapat ipaliwanag ng Salugpungan bakit 'yung mga bata may sarili silang kinakantang national anthem, at kung bakit din sila tinuturuan mag-dismantle ng armas. Di pa sila nagpapaliwanag until now (Salugpungan should explain why they are singing a different national anthem, and why are they teaching them how to dismantle firearms. They haven't explained their side until now)," Unad told reporters Wednesday, July 17, 2019 during the Pre-Sona press conference at the SMX Convention Center.

The leader said the tribes have already passed a resolution barring the presence of Salugpungan in their areas because their children are being used by the rebel groups to revolt against the government.

This was included in a report by Esperon filed before DepEd, which resulted in the issuance of the suspension order issued on July 10, but was only publicized on July 13.

Esperon, in his report, said that former Salugpungan teacher volunteer Melvin Mansaloon Loyod revealed the learning modules taught to the students included the following: how to conduct rally against the government; learn the song of the New People's Army (NPA); make drama about Lumad being tortured; Lumad women are raped; how to use firearms; ambush of military soldiers; clearing the body of dead soldiers; how to withdraw during encounters, confrontations and harassments; how to convince the children to stay with them or to fight the government; and other actions aimed to destroy the government.

DepEd has given the Salugpungan camp an extension until July 22 to reply to the show cause order after the agency issued a suspension order for their operation.

However, tribal members insist that Salugpungan should no longer be given permit to operate.

He added the school is trespassing in the ancestral domain. He also said the school does not possess a Certification of Pre-Condition from the tribal leaders.

Esperon, meanwhile, said his report was only based on the complaints from the tribal members themselves, and he denied any harassments behind their recommendation to suspend their operation.

The official also said Salugpungan does not have a Learners Reference Number (LRN), which is a basis for students during enrolments.

"These students have become exclusive properties of the NPA (New People's Army). They are making them as a tool to bring down the government," Esperon said.

SunStar Davao tried to reach out to any Salugpungan representative through text but as of press time there's no response yet.