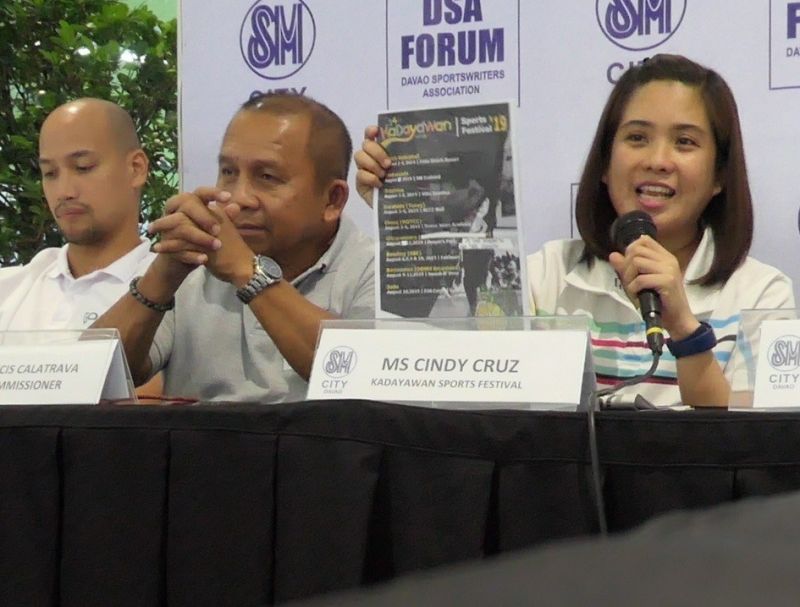 FROM 27 events last year, the 34th Kadayawan Sports Festival organizers added 10 more to spice up this year's edition of the annual sportsfest that will kick off with the triathlon competition on August 3 and 4 at the Villa Josefina Resort Village in Dumoy, Toril, Davao City.

Kadayawan Sports Festival program coordinator Cindy Cruz of the Sports Development Division of the City Mayor's Office, who guested in Thursday's (July 18) Davao Sportswriters Association (DSA) Forum at The Annex of SM City Davao, said: "We have more events this year than last year with 10 major events to look forward to while the rest of the competitions will serve as qualifying for the city's team in Batang Pinoy and Philippine National Games (PNG)."

"Having more events is part of the city's efforts to bring more tourists," she said.

Cruz also said that all officiating fees for city-funded tournaments were recently raised by the local finance committee, which elated Samahang Basketbol ng Pilipinas (SBP) 11 referees commissioner lawyer Francis Calatrava who said, "That's good news! The SBP has been very supportive to the plans of the city government. After all, we all want to celebrate Kadayawan and give Dabawenyos a good tournament."

Miguel Solitaria, for his part, said they will have yet to submit the rates of the officiating fees as they plan to get two referees from SBP Manila.

Cruz, meanwhile, said she has no idea on the total budget of the sportsfest but added that the local government unit (LGU) will shoulder mostly the cash prizes, officiating, trophies and other logistics needs of their partner clubs and organizations.

The 6th Kadayawan Run Davao Region Ultramarathon, she said, will be a 520-kilometer race that will cover major cities and provinces in Region 11.