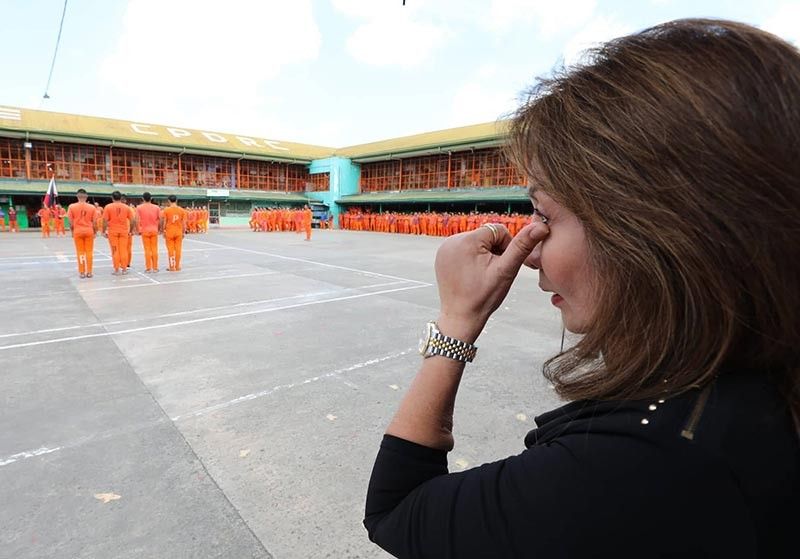 MOVED. Cebu Gov. Gwendolyn Garcia wipes the corner of her eye as she watches the formation of inmates, who surprise her with a dance routine during her visit at the Cebu Provincial Detention and Rehabilitation Center in Barangay Kalunasan, Cebu City on Thursday morning, July 18, 2019. (Contributed photo / Capitol PIO)

During her first visit to the Cebu Provincial Detention and Rehabilitation Center (CPDRC) in six years on Thursday, July 18, 2019, Garcia was welcomed by the inmates with a dance, a symbolic gesture as it was during her earlier stint as governor that the inmates became world-famous with their dance presentations that often went viral online.

However, Garcia noticed that the inmates were wearing shirts of various colors, and some of them were dancing in slippers. In her speech, the governor pledged clothes and shoes to the inmates, who later cheered for her.

Garcia also wants a livelihood program for the inmates, who could generate income by tailoring clothes, and producing handicraft and artwork.

A cooperative, she said, would keep and distribute the income of the inmates. Garcia further promised to implement a program that would rehabilitate the inmates who were jailed for illegal drugs and other crimes.

“Dako ang trabahoon. Dili nato ni madali-dali, apan inyong kasaligan, sama sa inyong nakita sa una, di gyud ko moundang hangtod matarong ta nig balik (This would be a huge task. We could not implement change right away, but you can trust me, just like what you witnessed before, that I would not stop to improve your situation),” she said.

In August 2018, the CPDRC stopped accepting new inmates until it could address the congestion problem. (From Chello Barellano & Myla Tabio, CNU Interns, KAL)