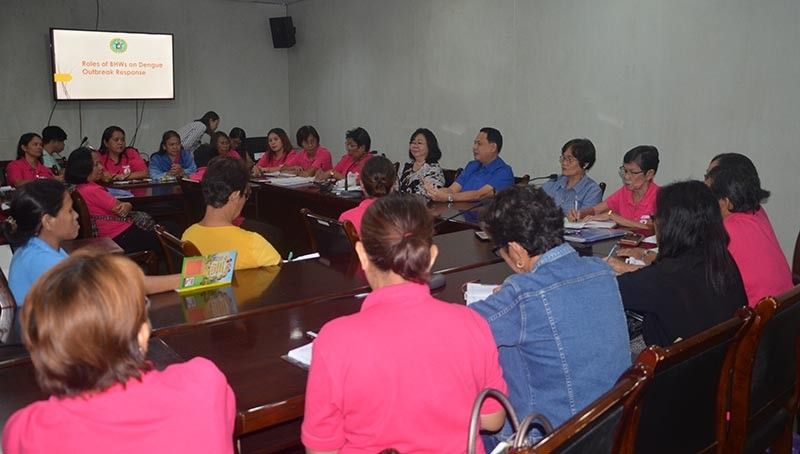 ILOILO. Governor Arthur Defensor, Jr. meets with the municipal presidents of the 8,000-strong Barangay Health Workers (BHWs) in the province to ask for their help in the campaign against Dengue. Defensor urged the BHWs to do a house-to-house campaign to seek and destroy the breeding places of mosquitoes and to monitor the implementation of the province-wide anti-dengue cleanup. (Contributed photo)

SCHOOLS in Iloilo Province will be conducting a synchronized “Brigada Kontra Dengue” on July 27, to combat the surge of dengue cases.

Governor Arthur Defensor Jr. said the Department of Education-Schools Division of Iloilo has already issued a memorandum order in support of the activity.

During his meeting with schools division superintendent Dr. Miguel Mac Aposin this week, the governor proposed that the school-based cleanup drive be repeated, but this time it will focus more on combating the dengue disease.

“Our preparations are underway and it will be held on the last Saturday of July. We want a serious cleanup drive that will focus on dengue,” Defensor said.

Those who will join are the same participants during the Brigada Eskwela that is held annually before classes start. But the governor does not encourage pupils and students to join as they are more susceptible to the disease.

The activity will commence with an assembly and orientation about dengue and will be followed by the synchronized cleanup.

As of July 18, there are already 1,148 dengue patients admitted in the 12 district hospitals in the province.

Defensor assured that the provincial government is on top of the situation.

Presently, the provincial government is halfway with the implementation of the provincial-wide “Do Day Kontra Dengue” which is held every Saturday of July. It is participated by the municipal officials, barangay officials, health workers, schools, and other stakeholders.

The Provincial Disaster Risk Reduction and Management Council is also drafting a resolution placing Iloilo Province under the state of calamity. It will be forwarded to the provincial board for approval.

The governor also assured that the province continues with the purchase of medicines, hiring of medical workers, and is looking for available hospital spaces.

Defensor met with the administrators and directors of private hospitals in Iloilo City on July 12 to request if they could cater to dengue patients that are now swarming at the district hospitals.

Tents are also being deployed to the hospitals to cater to more patients. (PR)