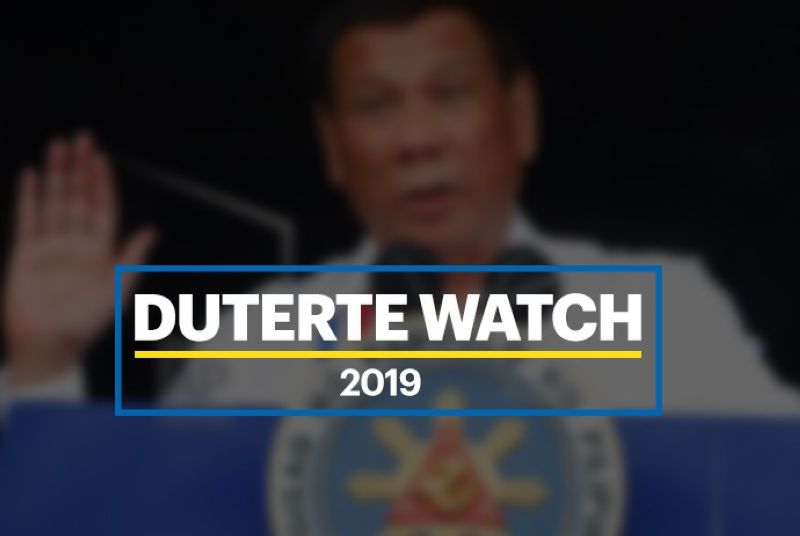 (Part 1 of Duterte Watch 2019, a SunStar Philippines special report about the “militarization” of the bureaucracy and the legacy that President Rodrigo Duterte wants to leave behind.)

NO, HE has no plan to declare martial law nationwide, President Rodrigo Duterte has repeatedly said.

Why would he when he has already appointed dozens of retired uniformed men to civilian posts in government?

On October 31, 2018, he admitted the “militarization” of the government.

Halfway into his six-year term, President Duterte has named 46 former military and police officers to key civilian posts in government, including 10 Cabinet and Cabinet-level positions.

He is not done. Duterte has said that he intends to hire more former military and police men in government in his last three years in office.

Duterte, in a July 13, 2019 interview with two of the country's major dailies, said he wanted retired soldiers and cops to have a greater role in his administration as he lamented the sluggish work of some civilian workers in the government.

He brushed aside observations that he was trying to win the uniformed men to his side by appointing them to government, saying he does not need to because he has the mandate of the Filipino people.

"I was elected by the people. Ang gusto ko lang sa (What I want about the) military is I can have the job done," Duterte added.

On July 18, 2019, Presidential Spokesperson Salvador Panelo said Duterte is impressed with the diligence of military men.

As of July 15, 2019, five of the 20 current heads of executive departments in the Duterte Cabinet are former military men. They are:

- appointed by Duterte to lead the DENR in May 2017

* Eduardo Año, Department of the Interior and Local Government Secretary

Cabinet-level officials who are retired officers of the military and police:

- transferred to Tesda in October 2018

- tapped as Duterte's presidential adviser on peace process in December 2018

Of the 10 Cabinet and Cabinet-level officials, Lapeña is the most controversial over his failure to address the smuggling of P11 billion worth of shabu that slipped past the Bureau of Customs (BOC) during his stint.

Lapeña, despite being mired in controversies, was "promoted" by Duterte as Tesda chief holding a Cabinet rank. In October last year, Duterte explained that he had to reassign the former BOC chief' to spare the latter from "intrigue."

In January 2019, Lapeña faced two counts of violation of the Anti-Graft and Corrupt Practices Act, dereliction of duty and grave misconduct over the two incidents of shabu shipments.

But Malacañang, in the same month, said the Tesda chief still enjoys Duterte's trust and confidence.

Meanwhile, Honasan's appointment as DICT chief was questioned, as he allegedly failed to meet the requirements under Republic Act (RA) 10844 or the Department of Information and Communications Technology Act of 2015.

Under RA 10844, an appointed DICT secretary must have "at least seven years of competence and expertise in any of the following: information and communications technology; information technology service management, information security management, cybersecurity, data privacy, e-commerce, or human capital development in the ICT sector."

Malacañang, however, said in July 2019 that Honasan's management expertise makes him qualified to head the DICT.

Admiring the integrity and competence of men in uniform, Duterte believes that the retired soldiers and cops who are in his Cabinet can help him fulfill his mandate to serve and protect the Filipinos.

Duterte, for instance, mentioned Cimatu and Año in his several impromptu speeches and cited their significant contribution to the rehabilitation of Boracay, which was once plagued by environmental problems.

The President was confident that the former military and police men who are now Cabinet officials would follow his orders, especially when he steps up his fight against unabated corruption in government.

"Most of my Cabinet members are military people, those who have retired," the President admitted in a television interview on July 16, 2019.

Duterte also hinted that he may appoint another "military man" as the new head of Department of Agriculture, replacing resigned Agriculture Secretary Emmanuel Piñol who will be moved to the Mindanao Development Authority.

Other former military and police officials who are holding key civilian positions in government are:

Some appointees have been embroiled in controversies.

Duterte, just recently, expressed his exasperation over the continuing irregularities within the BOC currently led by Guerrero.

Under the President's watch, the BOC has been headed by Faeldon, Lapeña, and Guerrero.

However, corrupt activities in the BOC continue, despite the Chief Executive's gambit to task a former military man to lead the bureau.

The President on July 17 acknowledged that corruption in BOC remains unresolved, but was optimistic that Guerrero can get his job done. The President fired 64 administrative personnel but retained Guerrero.

"The last stronghold ng mga [of those who are corrupt] corrupt -- it used to be the people who would like to join government would choose the BIR or the Customs. 'Yan talaga ang paborito nila," Duterte.

"So it prompted me to appoint an army man. Si Jagger Guerrero used to be the Chief of Staff. He worked in Davao once upon a time. He was the commander of the Task Force Davao. Mahusay (He's good). He's very good," he added.

In June, human rights group Karapatan took note of Capuyan's record that was "plagued with irregularities" for his alleged involvement in the smuggling of P6.4 billion worth of shabu into the country May 2017.

Also in June, the Sandugo Movement of Moro and Indigenous Peoples for Self-Determination claimed that Capuyan, as NCIP head, "can legitimize further militarization and terrorize indigenous peoples communities nationwide."

To note, Gambala, prior to his new stint, was also the Customs deputy commissioner linked to the controversial P6.4-billion smuggled shabu.

The 1987 Constitution is silent on the appointment of retired uniformed men to civilian posts in government. Only those in active service are not allowed to hold government posts.

Section 5(4), Article 16 of the Constitution further states that “no member of the armed forces in the active service shall, at any time, be appointed or designated in any capacity to a civilian position in the government, including government-owned or -controlled corporations or any subsidiaries.” (SunStar Philippines)