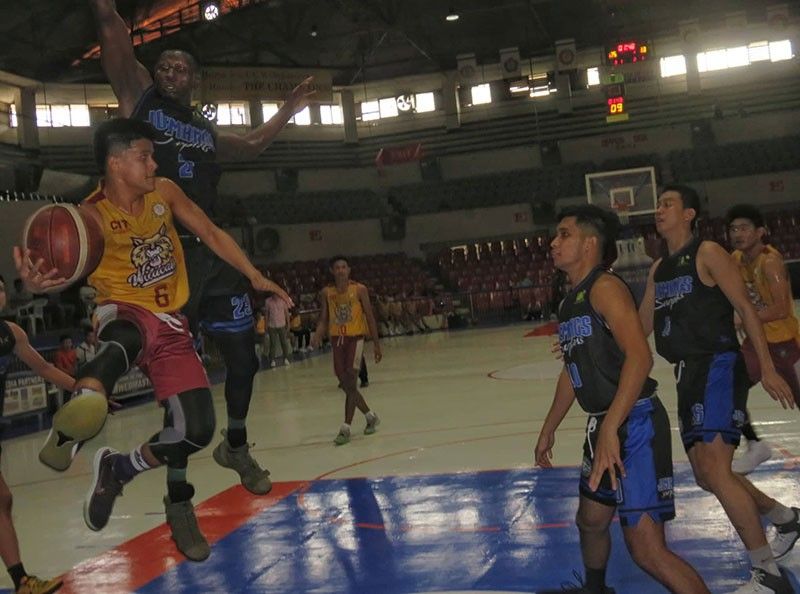 NOWHERE TO GO. A CIT-U player looks for an open teammate while the UC defense collapses on him in their Partners Cup encounter. (SunStar Photo/Allan Cuizon)

THE Joemang’s Surplus/University of Cebu (UC) Webmasters showed off their full arsenal with a masterful 87-65 triumph over the hapless Tough Gear/Cebu Institute of Technology-University (CIT-U) Wildcats in the men’s division of the Cebu Schools Athletic Association Inc. (Cesafi) Partners Cup 2019 on Saturday, July 20, 2019, at the Cebu Coliseum.

The Webmasters waxed hot early in the game with a 17-7 blitz in the opening period anchored on court general Daryll Shane Menina and import Tosh Sesay, who combined with 10 points.

UC broke away in the second period as sweet-shooting veteran Tristan Albina drilled a three-pointer to stretch the lead to 13 points. Menina canned in another one from the rainbow country to beat the buzzer and give UC a commanding 42-21 edge at halftime.

The Wildcats tried to mount a fightback in the fourth period but the closest they could get was within 11 points, 54-65, before UC seized full control again to finish the game with a 22-point lead.

Sesay led the way for the Webmasters with 19 points, Menina finished with 17 points, Luigi Gabisan handed 14, while Albina and Rodel Gravera contributed 11 points each.

The Webmasters improved to a 7-3 (win-loss) record and currently stands at third place in the team standings behind the Southwestern University (SWU)-Phinma Cobras (7-2) and the University of the Visayas (UV) Green Lancers (9-0).

J.C Aloro scored 20 while Monsol Proel chipped in 14 points for CIT-U, which dropped to a 1-10 record.

In the high school division, the CIT-U Wild Kittens exited the preseason tournament on a strong note after beating the USP-F Baby Panthers, 74-65.

The USPF-CIT-U game was a non-bearing match as both teams were already eliminated and the Final Four is already set. The Wild Kittens finished the tournament with a 2-6 record while USP-F has a 3-3 card.

Those who made the final four in the school division are the ARQ Builders/UV Baby Lancers, USJ-R Jaguars, Hotel Fortuna/UC Junior Webmasters and the Cebu Landmasters/Sacred Heart School Ateneo de Cebu Magis Eagles.

There will be no games on Sunday and the action will resume on Tuesday, July 23. (RSC)