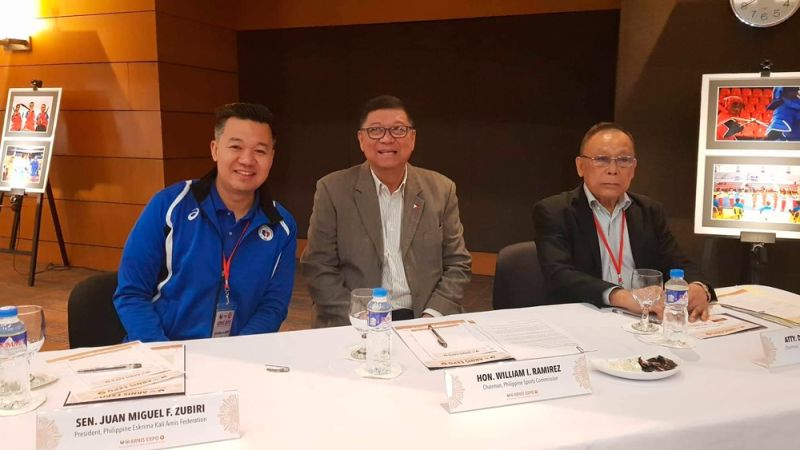 PROMISE. The tour is also part of SGM Dionisio Cañete’s (right) promise to PSC chairman Butch Ramirez to have at least 100 countries join Wekaf. He is accompanied by his son Gerald (left). (CONTRIBUTED FOTO)

ESKRIMA Supreme Grand Master (SGM) Dionisio Cañete and his son Master Gerald Cañete are on a mission to solidify and strengthen the spread of Filipino Martial Arts (FMA) in Europe.

The father-and-son tandem travelled together for the first time to observe the 2019 European Championships in Romania, which serves as a qualifying tournament for the 2020 World Eskrima Kali Arnis Federation (Wekaf) World Championships that will be held in the Philippines.

The Cañetes are travelling on their capacity as ambassadors for arnis/eskrima; SGM Cañete being the founder and chairman Emeritus of Wekaf, the International governing body of arnis/eskrima and the author of the rule book and guidelines that formalized and professionalized Arnis as a sport. The younger Cañete is the executive vice president of the Philippine Eskrima Kali Arnis Federation, the second in command to Sen. Migs Zubiri who is the president of the Arnis NSA, and the person in-charge for arnis in the upcoming 30th Southeast Asian Game in Pampanga.

After the European Championships, the two will embark on a series of Doce Pares style seminars in Hungary, Romania, Germany, London and Russia.

SGM Cañete brought along his son in this tour to acquaint the heir apparent to the rigors and responsibilities being the next in line of the Doce Pares hierarchy.

The European tour is also a step towards the promise of SGM Cañete to PSC chairman William “Butch” Ramirez of attracting at least 100 countries to become members and affiliates of Wekaf, which he reiterated during the Asean Arnis Expo last week in Manila.

The Cañetes are accompanied by another accomplished personality of the sport in Master Ernesto Romo Jr. (PR)