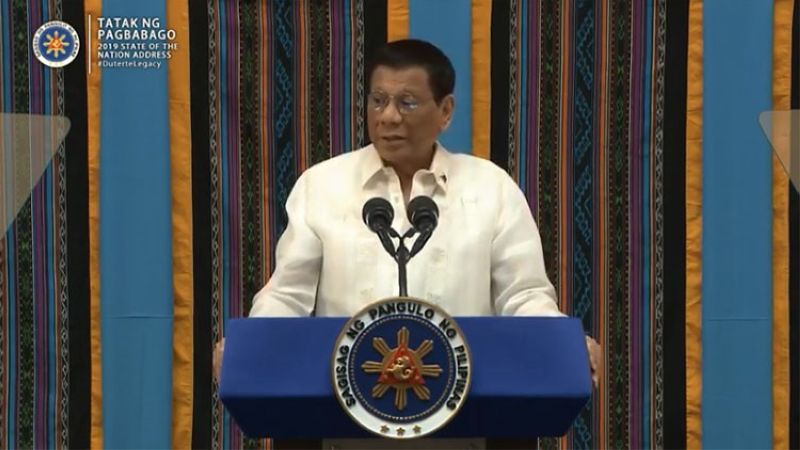 In his fourth State of the Nation Address delivered before the Joint Session of Congress Monday, Duterte said the government still has a long way to go in the fight against illegal drugs.

He warned drug offenders that the government's fight against illegal drugs would continue to be harsh in his remaining three years in office.

Duterte made the request after recalling how tons of illegal drugs and graft money were found after the five-month battle in Marawi City.

"Drug money killed 175 and wounded 2,001 of my soldiers and policemen in that five-month battle. I am aware that we still have a long way to go in our fight against this social menace. That's the reason why I advocate the imposition of the death penalty for crimes related to illegal drugs," the President said.

At the same time, he also vowed to continue the fight against corruption.

"The drugs will not be crushed, unless we continue to eliminate corruption that allows the social monster to survive. I respectfully Congress to reinstate the death penalty for heinous crimes related to drugs, as well as plunder," he said.

The restoration of the death penalty has always been one of the priorities of the Duterte administration.

The House passed its version of the death penalty bill, focusing only on drug-related offenses, in March 2017. The Senate, however, failed to pass a similar bill in the 17th Congress.

The death penalty was abolished in the Philippines in 2006, under the administration of former President Gloria Macapagal-Arroyo.

Arroyo voted against its restoration in 2017 and was subsequently stripped of her position as Deputy Speaker.

Arroyo is among the 2,000 guests in the plenary hall of the House of Representatives who attended Duterte's Sona. Other former Presidents, Fidel Ramos and Joseph Estrada Ejercito, are seated next to her.

Duterte's call for the restoration of the death penalty was made less than two weeks after the United Nations Human Rights Council adopted an Iceland-led resolution, which seeks thorough scrutiny of the Philippines' human rights situation following the surge in drug-related killings.

Around 6,600 alleged drug offenders were killed in law enforcement operations from July 2016 to May 2019, according to the data released the Philippine National Police released in June.

The President insisted that he would ignore any foreign intrusion in his anti-narcotics campaign.

Earlier, Duterte also stressed that killings would go on, if it is the only way to put an end to the rampant sale of illegal drugs in the country. (With MVI/SunStar Philippines)