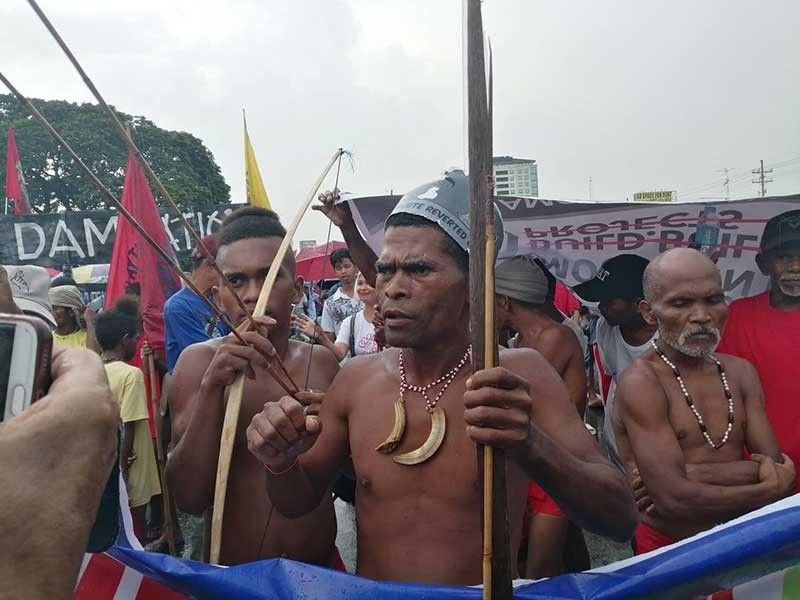 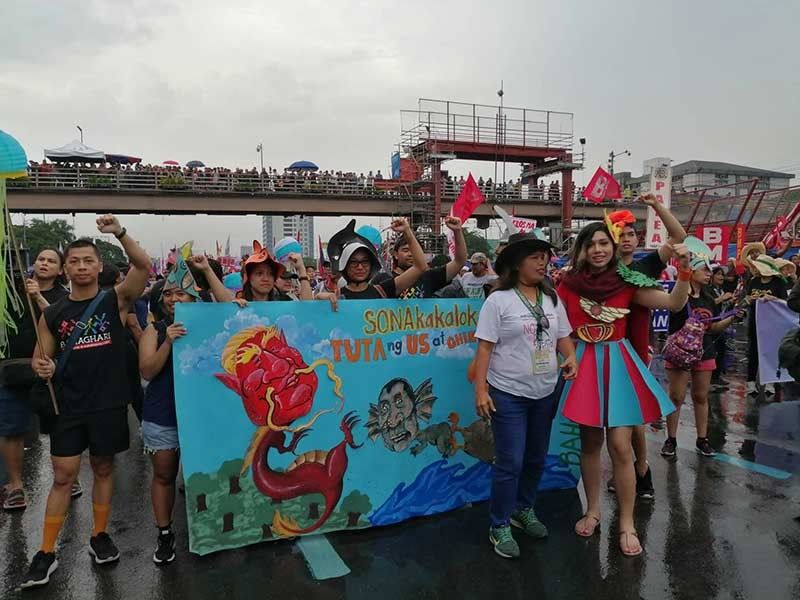 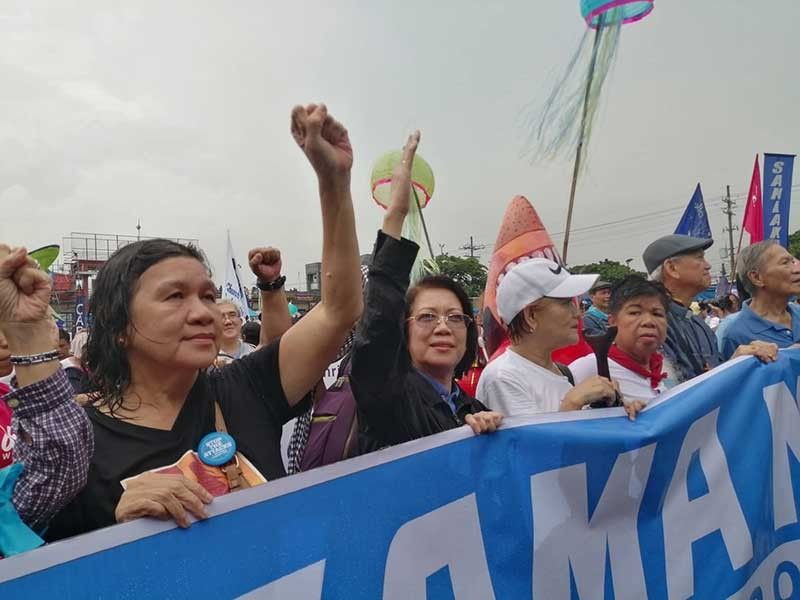 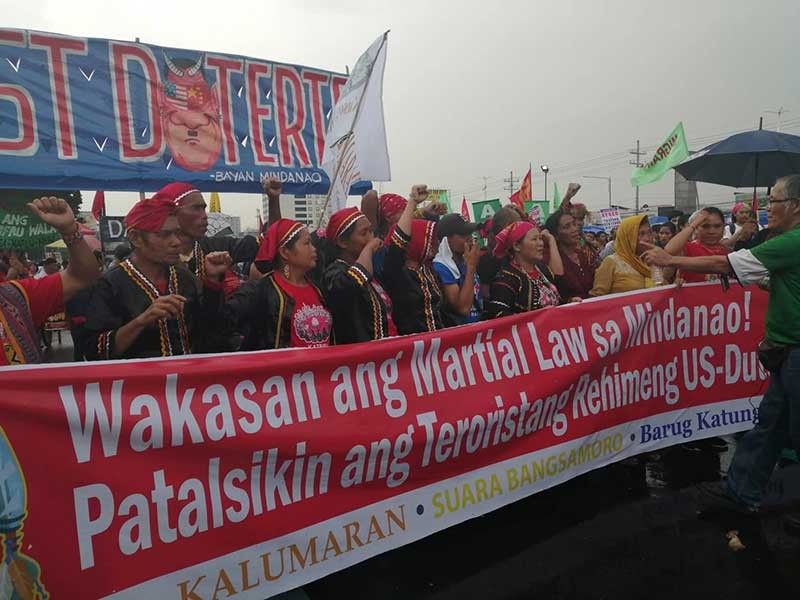 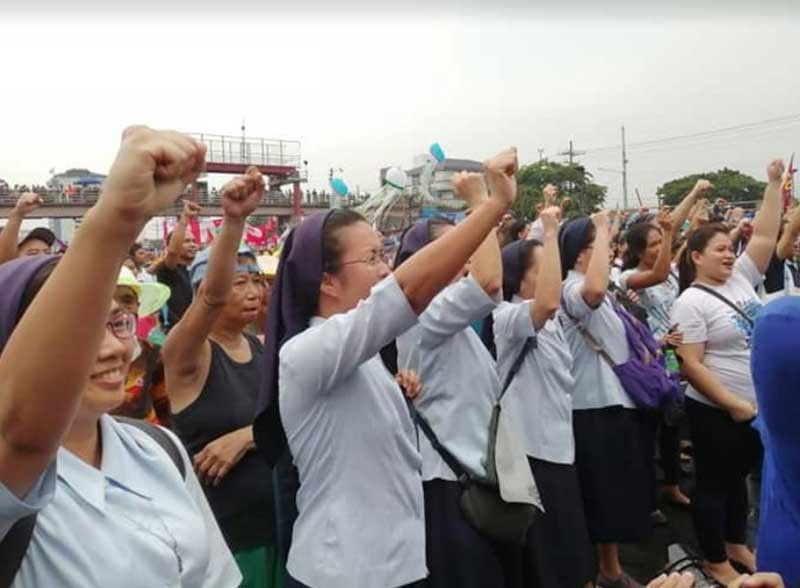 UNFAZED by the heavy rains, thousands of protesters trooped to Commonwealth Avenue in Quezon City on Monday, July 22, to air their concerns on various issues in time for President Rodrigo Duterte’s fourth State of the Nation Address (Sona).

Members of the LGBTQ (Lesbian, Gay, Bisexual, Transgender and Questioning), fishermen, students and youth, and workers stood united to voice out their concerns such as contractualization, martial law, rice tariffication, gender equality and the K-to-12 education system.

Marissa Lazaro, a housewife from Caloocan City and a member of Rise Up Philippines, said she joined the protest to call for justice for her slain son and urge the government to stop the crackdown on illegal drugs.

Lazaro’s son, Christopher, was killed at a checkpoint in Marilao, Bulacan, after allegedly fighting it out and refusing to stop for inspection.

She claimed that the policemen planted illegal drugs and firearms on her son.

Lazaro said her son, the youngest among her children, was never involved in any illegal activities and was working in a fastfood chain.

Marissa Candinato, whose husband is a fisherman from Bacoor in Cavite, said she joined the protest action to denounce the government’s “soft” treatment of the incident in Recto Bank on June 9, 2019, when a Chinese vessel rammed and destroyed a Filipino vessel.

The Chinese also abandoned the 22 Filipino fishermen, who were rescued by Vietnamese fishermen.

She said they are also against the reclamation of Manila Bay as it will affect their livelihood.

Nenita Condez, a leader of an indigenous group from Zamboanga del Norte, said they are against martial law.

The entire Mindanao region was placed under martial law on May 23, 2017, shortly after militants from the Maute group laid siege on Marawi City.

Condez said she has earned the ire of the military for fighting for their ancestral land. Her brother and father were also slapped by trumped up charges, she said.

Fredy Saplala, a member of the Aeta indigenous community from Porac in Pampanga, joined the rally wearing the traditional bahag.

He lamented that their ancestral lands are being sold to investors.

Bernadette Neri, chairperson of LGBTQ group Bahaghari, said they are seeking a “true” law for equality and anti-discrimination. The group is also pushing for same-sex marriage.

Neri denounced Duterte’s statement implying that being a gay is a disease.

On May 31, during his speech in Japan, Duterte cracked a joke saying he was once a gay but already “treated” himself when he met his partner Honeylet Avanceña.

Jaya Coronel, a college student from the University of Santo Tomas (UST), criticized the K-to-12 system.

Also present were members of religios groups including former chairperson of the Association of Major Religious Superiors in the Philippines Sister Mary John Mananzan. (SunStar Philippines)