Progressive groups rate Duterte: ‘He is a failure’ 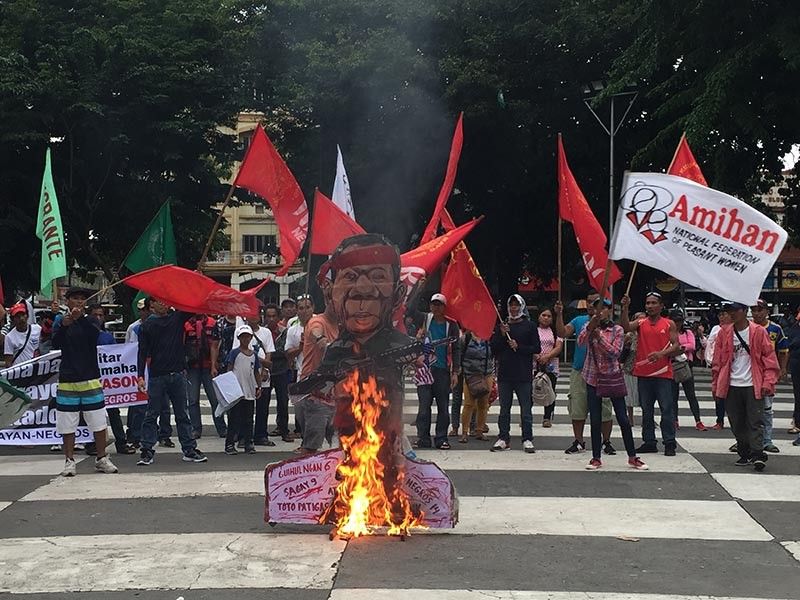 This was stressed by Noly Rosales, secretary-general of Kilusang Mayo Uno-Negros, after President Rodrigo Duterte delivered his fourth State of Nation Address at the Batasan Pambansa in Quezon City on Monday, July 22, 2019.

Rosales said that Duterte should step down because of his failure to address the problems in the country for the last three years.

“Our people still remain poor because there’s no improvement under his term,” he said.

About 2,000 members of KMU-Negros along with other militant groups in Bacolod City and Negros Occidental held a rally at the Bacolod Public Plaza yesterday to call again for the ouster of President Duterte.

The militants, who were holding placards and tarpaulins, assembled at the Provincial Capitol Lagoon and marched towards the Bacolod Public Plaza. The militants also burned the effigy of President Durterte.

Rosales said at present, there are about two million people in the country who are still unemployed.

Rosales disclosed that since last year, they are calling President Duterte to step-down because of his failure to address the problem in the country, especially the problem of the poor.

Secretary General of the National Federation of Sugar Workers Butch Lozande for his part said, “We want to address the government of our situation and struggle and to fight for our dignity. Under his 3-year presidency, he doubled the salary of the police and military. For us workers, there has been no increase in our wages.”

Lozande mentioned the new scheme Duterte had implemented in the Negros Island region, in which he swore to give land to poor people for them to be able to support themselves. According to Lozande, this scheme has been corrupted by the existing landlords who are not complying with the President’s promises.

He said as a result peasant workers are having minimum wages and no land to cultivate their crops. Poor workers also get killed by rich landlords because of their wishes to rightfully claim their land.

“We want justice for the killings of 70 people since January 2017 under his administration. He should be helping the production of our goods so he can literally save workers lives and improve the country’s economy,” Lozande added.

“If he cannot answer to his promises, the true demands, and struggles of our people, he should resign,” Lozande concluded.