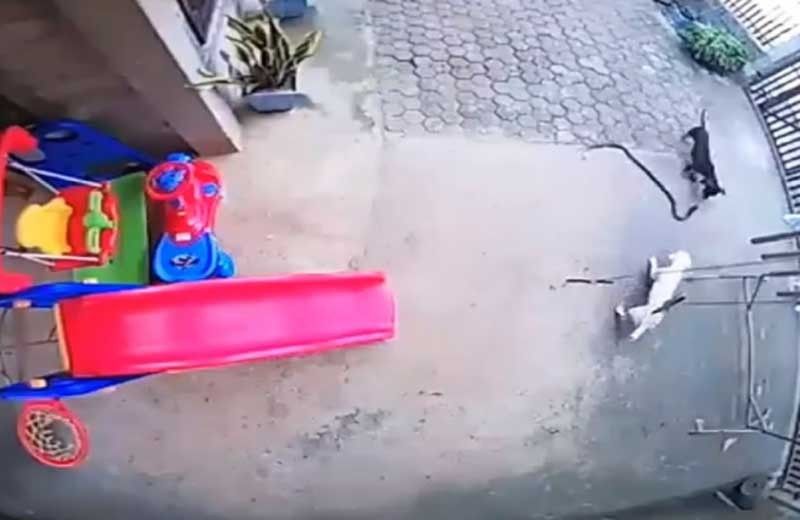 KIDAPAWAN CITY -- A dog died minutes after fighting and killing a cobra, which had wandered into the front yard of their owner's home around 2 p.m., on Sunday, July 21.

The dog battled with the cobra along with another dog. The fight was captured on the closed circuit television (CCTV) installed by their owner Jaime Selim.

The snake also succumbed to multiple dog bites on its head and body.

WATCH. Two dogs battle with a snake that had wandered into the front yard of the dog owner's residence in Kidapawan City. The black dog died from snake bites while the white dog mightgo blind because of snake venom in its eyes. The snake was killed. Video courtesy of dog owner Jaime Selim

Selim, a fastfood manager, narrated how a cobra had managed to get inside the front yard of his house in Barangay Lanao.

His two Dachshunds were quick to defend their dwelling and attacked the snake.

After the battle, the black dog succumbed to a snake bite while the white dog might go blind because of snake venom in its eyes.

Selim was thankful to his dogs for battling the dangerous cobra, especially since his one-year-old child was inside their house sleeping.

As of presstime, a dog lovers/owners organization in Kidapawan is mulling to give recognition to the dogs for being loyal and faithful in protecting their owner. (EEF)
< Previous PageNext Page >