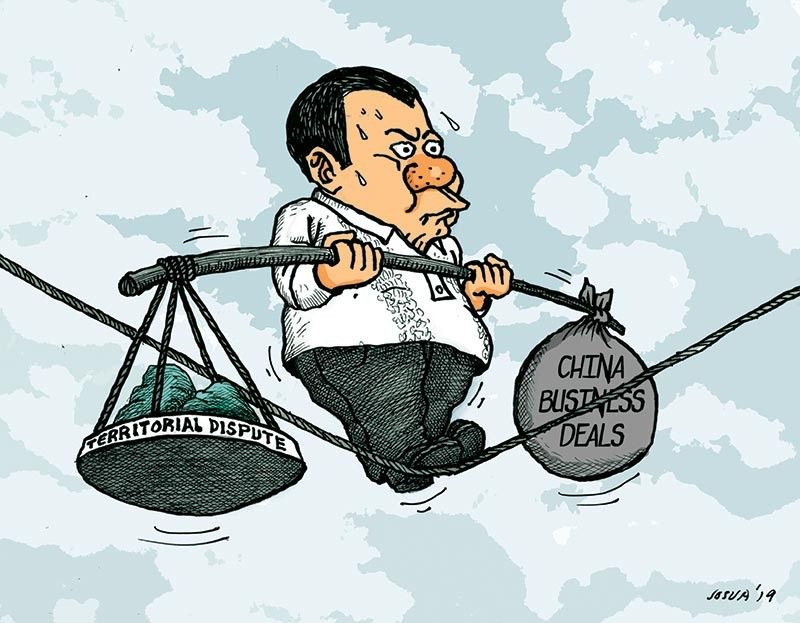 TERRITORIAL disputes usually outlive presidential terms, although not quite with President Xi Jinping who has free rein since China’s constitutional amendment on term limits in 2018.

So when you have President Rodrigo Duterte and Xi on the matter of the West Philippine Sea (WPS), the balance simply tilts. The odds are with the Philippine President, with hardly three years left in his term and obsessed by his vision of national prosperity hitched on China as its grand enabler.

Thus, you can see how the WPS issue makes a clumsy juggler out of the President, helped in no small way by the recent Recto Bank incident and a public pressure for a resolution. Duterte, in the days leading up to his State of the Nation Address (Sona), said he will use the bicam platform to “educate” the Filipinos on the WPS issue. So we waited for just what sort of enlightenment will descend upon us.

In the Sona, the President mentioned a standoff at the WPS that took place during the previous administration. He was probably referring to the 2012 impasse in which the Philippines pulled out its largest warship, the BRP Gregorio Del Pilar, but only to see China reinforcing its fleet in the disputed waters.

That day, said Duterte in his Sona, “we lost the Spratly and the Panganiban Island.” China has since then been in possession of the islands, it is near impossible to tug them out, the President said. He could not just drive the Chinese away. If he sends the navy frigates, they’d be shreds in seven minutes.

The tricky part for the President is that while he negotiates from the position that the WPS is ours, he also acknowledges that China is also a dogged claimant. That’s the pragmatism that he finds hard to explain simply because it is incompatible with the loftier notions of sovereignty and territorial integrity. Had the matter been just a swearing contest, he’d have easily won it, but it wasn’t, and so he stepped back with the softest of tack—wiser for him who would rather conduct business as usual with the Chinese.

The President had always said time and again that he’d rather talk in the boardrooms than go to war. True, indeed, and from out of these boardrooms emerge deals on joint explorations and whatnot involving the WPS and a good number of giant infrastructure projects.

There is a time for everything, to antagonize or to make peace, Duterte said, quoting Ecclesiastes.

So this is pretty much what we can expect from this President until his term ends in 2022, a soft stance on the WPS. There is a lot of interest with China, and quite uncharacteristic of the firebrand, he speaks softly.