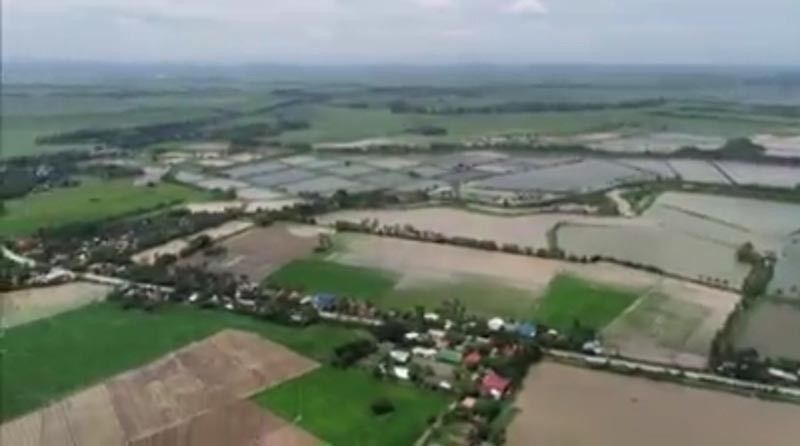 NEGROS. A screen shot of the video taken by the Office of the Provincial Agriculturist showing the flooded rice fields in Valladolid town in Negros Occidental during the recent onslaught of Tropical Storm Falcon. (Contributed photo)

THE recent onslaught of Tropical Storm Falcon that enhanced the Southwest Monsoon has brought P15.4 million worth of damage and production losses to the agriculture sector of Negros Occidental.

The Office of the Provincial Agriculturist (OPA), in its progress report, said the rice crop losses have climbed to about P14.6 million.

The figure covers a total of 1,401 affected farmers with 1,542.40-hectare farms in 54 barangays of six localities.

The amount comprises 305 farmers of 452.60-hectare rice fields in 13 barangays of the southern Negros Occidental locality.

It was followed by San Enrique with P3.2 million covering 217 affected farmers with 348.91 hectares in seven barangays.

Other localities with rice farms hit by the storm are Hinigaran with P2.9 million in damage and losses, Ilog with almost P1.1 million, and Moises Padilla with P629,336.

These towns comprise the remaining 324 hectares of affected rice fields planted by 466 farmers in 17 barangays.

Under NFUCIP, farmers may avail themselves of the P17,000 claim per hectare of damaged farms.

The NFUCIP is an initiative of the provincial government, in partnership with the Philippine Crop Insurance Corp. (PCIC), which began in 2011.

Under the modified guidelines, enrollment premium per cropping season remains at P840, but the whole amount will now be shouldered by the provincial government as a loan.

Enrollees should apply for insurance before planting. Farms covered by the program are those planted for not less than 25 days.

In terms of livestock and poultry, the Provincial Veterinary Office (PVO) earlier reported a total damage worth P846,818 also due to heavy rains and flooding brought about by Tropical Storm Falcon.

The amount covers 27 barangays in eight local government units (LGUs) such as the cities of Bago, La Carlota and Kabankalan, and the municipalities of Pulupandan, Valladolid, San Enrique, Isabela, and Ilog.

PVO, earlier, said the damage was just “minimal” as various preventive measures including increased awareness on disaster preparedness, risk reduction, and response among animal raisers were already put in place.