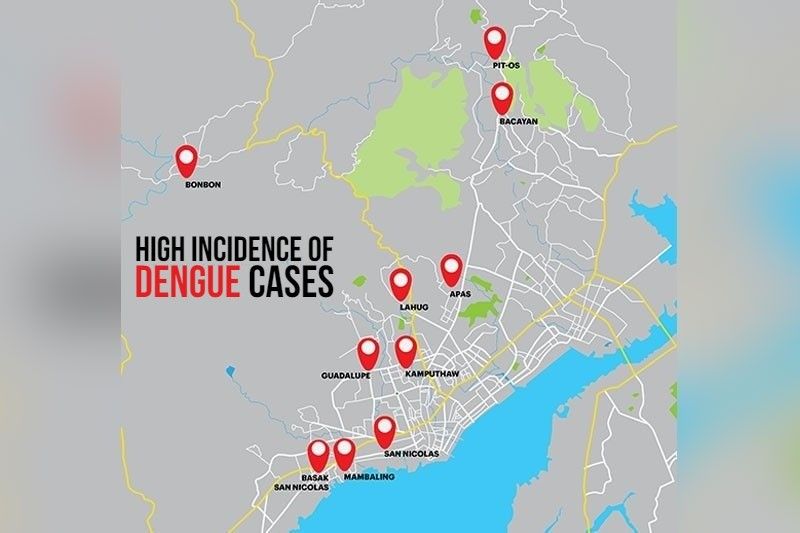 THIRTEEN barangays in the cities of Cebu, Lapu-Lapu and Mandaue with several dengue cases are being watched by the Department of Health (DOH) 7.

The villages have reactivated their respective dengue brigades to curb the increase in dengue cases.

These groups are tasked to conduct daily clean-up drives and inform the residents about the strategies against fallling ill with dengue fever: search and destroy mosquito breeding places, secure self-protection from mosquito bites and seek early consultation when symptoms of dengue occur.

Regional Epidemiology Surveillance Unit (Resu) 7 Chief Shelbay Blanco said there was a week that his office recorded 12 dengue cases in Guadalupe and Camputhaw.

Cebu City has the highest number of dengue cases in Central Visayas from January until July this year—1,396.

Ten persons with dengue fever died during this period, according to Blanco.

This latest number of dengue cases is 40.72 percent higher than the 992 dengue cases and six deaths recorded in the same period in 2018.

Lapu-Lapu City has had 641 dengue cases and two deaths in the first seven months of 2019.

In Mandaue City, Resu 7 recorded 430 dengue cases and three deaths from January to July this year. The city had 268 cases and no deaths in the same period in 2018.

The three major cities of Cebu Province contributed to the rise in dengue cases in Central Visayas, which saw a 139 percent increase in the first seven months of 2019 with Resu 7 recording 9,990 cases and 65 deaths.

Central Visayas and four other regions—Western Visayas, Calabarzon, Soccsksargen and Northern Mindanao—have the most cases of dengue in the country, according to the DOH. (from HBL of SuperBalita Cebu/KAL)