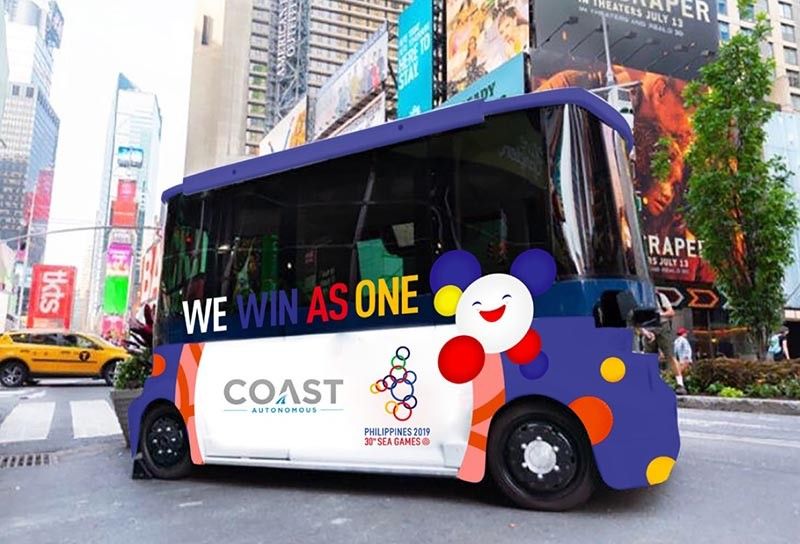 CLARK FREEPORT -- The Bases Conversion and Development Authority (BCDA) has tied up with United States (US)-based mobility company, Coast Autonomous, for the pilot testing of low speed autonomous vehicles within New Clark City at no cost to the government.

The autonomous or “self-driving” vehicles will be used to provide transportation services for the athletes during this year’s Southeast Asian (SEA) Games.

Three electric Coast P-1 shuttles are expected to arrive in the country in mid-October for the pilot testing. Each shuttle can accommodate up to 20 passengers and will transport athletes to and from the Athletes’ Village, the Athletics Stadium and the Aquatics Center.

Shuttle services will also be offered to the riding public during the Games.

Coast Autonomous will use high-definition, 3D mapping machines for the shuttles’ route.

“It is a great honor to partner with BCDA and the Philippines to deploy a fleet of [shuttles] to New Clark City for the SEA Games and we are grateful for this incredible opportunity. The SEA Games is the perfect event and New Clark City, the ideal location to showcase the future of urban transportation,” COAST Autonomous Chairman David Hickey said earlier.

Hickey added that electric and self-driving shuttles are “the natural successors to the streetcar” and can be the backbone of a new, clean and more efficient streetcar system.

“As the first smart and green city in the Philippines, New Clark City will adopt sustainable alternative modes of transportation that may eventually reduce people’s dependence on cars,” BCDA President Vince Dizon said. “The city will have better accessibility with streets that are biker- and pedestrian-friendly.”

BCDA and Coast Autonomous will sign the memorandum of agreement for the pilot testing by August.

New Clark City will serve as the main sports hub for this year’s SEA Games as the new and modern sports facilities are almost completed.

The facilities include the 20,000-seater Athletics Stadium, 2,000-seater Aquatics Center, and an Athletes Village that will provide housing and training facilities for the athletes, as well as SEA Games officials and volunteers.

At the center of these facilities is the 1.4-kilometer River Park Corridor that will have recreational spots for community activities.

Of the 543 sporting events to be hosted in the SEA Games, more than 200 events will be held in Clark.