Naval ships to be made in Balamban 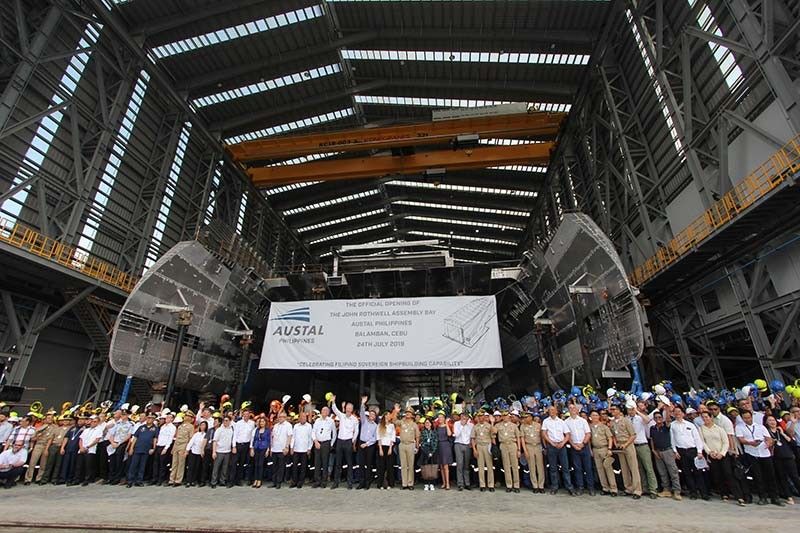 The company’s expanded facility, now licensed to build naval vessels, will pave the way for the immediate construction of offshore patrol vessels (OPVs) for the Philippines.

The expansion has also created hundreds of jobs more for the residents.

“Our Balamban shipyard is a showpiece,” company president Wayne Murray said Wednesday, July 24, 2019 at the launch of the John Rothwell Assembly Bay.

The construction of the company’s largest vessel by volume to date, the Hull 419, a 109-meter vehicle-passenger ferry for Fjord Line Norway, is ongoing at the John Rothwell Assembly Bay.

Speaking at the launch Wednesday, Department of National Defense (DND) Secretary Delfin Lorenzana confirmed the government was keen on acquiring naval ships that are soon to be produced in Balamban.

He said they were looking at two financing options for the procurement—government-to- government deal or a bidding.

The former, he said, is the most viable, noting it to be “fast and easy.”

Austal earlier expressed interest to build six OPVs for the Philippine Navy, as part of the Armed Forces of the Philippines’ modernization program.

Lorenzana said the government was looking at signing the contract, pegged at P30 billion for the six OPVs, by the end of this year.

After the contract signing, he expects the delivery of the first vessel in two years.

Austal’s shipyard, located in the West Cebu Industrial Park, is ready to construct other navy vessels for export.

Murray said the new production base, which increases the company’s footprint in Cebu by 300 percent, will mean more projects for the company, including passenger and vehicle-passenger ferries, workboats, offshore crew transfer vessels and naval ships.

The vessels offered by the company to the Philippine Government are a larger variant of the Cape-class patrol vessels used by the Royal Australian Navy and Australian Border Force.

Company chairman John Rothwell is optimistic about the Philippines’ potential in designing and building the world’s best naval vessels just like what they did in the United States and Australia.

“We have the opportunity to pursue multiple, commercial and naval opportunities,” he said, citing the OPVs for the Philippine Navy.

The company’s investment included the reclamation of an additional 20,000 square meters of waterfront land and development of new handstand and mooring facilities that will allow a greater number of larger vessels to be designed, built and maintained in the Philippines.

The shipbuilder employs over 900 engineers, design staff, skilled laborers and production people at its Balamban facility. About 90 percent of them are Filipino.

Company chief executive officer David Singleton said the expansion is part of the firm’s ongoing strategy to regionalize the manufacturing base for commercial vessels.

Its Cebu shipyard, which began operating in 2012, has since delivered 17 ships to 10 operators in nine countries.

Balamban Mayor Alex Binghay said this new investment will bring in more income for the local government and jobs for Cebuanos.

He noted Austal’s operations in Balamban have raised its economic status from being just a fishing and agricultural town.

Austal started with only 30 workers in Balamban, but that number has since grown to close to a thousand.