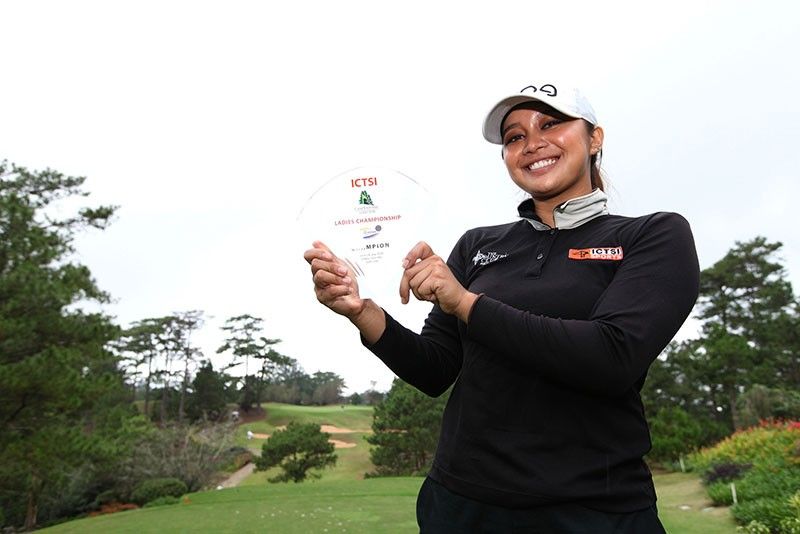 DOWN FOUR, WIN BY FOUR. Princess Superal started the final round four strokes down but hit a 61 to win the ICTSI Camp John Hay Championships by four strokes. (Contribued Photo)

PRINCESS Superal snapped a 16-month title spell on the Ladies Philippine Golf Tour in imposing fashion, closing out with an eagle-spiked, bogey-free 61 to rally from four down and win by four over Chihiro Ikeda in the P1 million ICTSI Camp John Hay Ladies Championship at John Hay Golf Club in Baguio on July 26, 2019.

Four birdies at the front shoved Superal from four down to 1-up over Ikeda then the diminutive but talented shotmaker fired two more birdies at the back and gunned down an eagle on the par-5 16th to spike a blistering final round charge and reign again on the very course she won in record fashion as an amateur in 2013.

Ikeda lost in the face of Superal’s fiery charge and fell behind by as many as six before closing out with back-to-back birdies to save a second straight 69 for second at 201.

Superal’s 10-under total was way off her record 17-under 190 in beating Ikeda by eight in the LPGT inaugurals six years ago, but it proved enough to net her first LPGT crown since she scored back-to-back victories at Highlands and Riviera in March last year.

Though she spent the last two months campaigning in Japan LPGA Step Up Tour, the former US Girls’ Junior titlist has had a couple of failed title bids (runner-up finishes) and two top five efforts early in the LPGT season.

“I didn’t mind where I stood before the start of the final round and just focused on my game. I was so confident when I grabbed the lead at the turn and was so pumped up after I birdied No. 12,” said Superal, who settled for joint seventh in severe conditions at Pradera Verde Classic last week.

Ikeda, who nipped Pauline del Rosario in a playoff to snare the LPGT Midlands crown last May, matched Superal’s birdie on No. 2 to hold sway but reeled back with three bogeys in the next four holes although she trailed by just one despite a frontside 36.

But as Superal pressed her bid with birdies on Nos. 12 and 13, Ikeda failed to get the breaks while attacking the pins, bogeying No. 13 to fall behind by four and going six-down after the former eagled the 16th for the second time in three days. (PR)