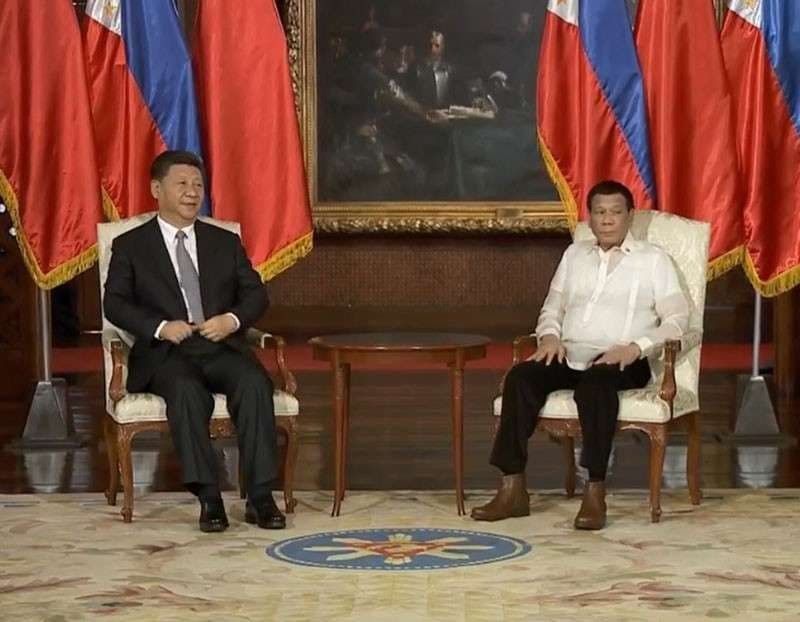 MANILA. In this file photo, Philippines President Rodrigo Duterte and President Xi Jinping of the People’s Republic of China witness the exchange of several agreements during the latter’s State Visit to the Philippines at the Malacañan Palace on November 20, 2018. (Photo from RTVM video)

CHINA remains to be the least trusted country by Filipinos, according to the latest survey conducted by pollster Pulse Asia.

The survey, conducted from June 24 to 30, revealed that 74 percent of Filipinos expressed distrust in China.

The survey also found that 87 percent of Filipinos were aware of the June 9 allision of Chinese and Filipino vessels at Reed Bank, and 36 percent believed it was necessary for the Philippine government to urge China to pursue sanctions against the crew of Chinese boat that abandoned the 22 Filipino fishermen aboard their sinking boat.

It also showed that 26 percent of Filipinos believed China itself, not just the Chinese vessel involved, should be made to pay for the Recto Bank incident.

Nineteen percent were also convinced that Chinese crew who left the Filipino fishermen abandoned at sea should be tried in a Philippine court.

The poll also noted that 10 percent said the Philippines and China should agree on a set of rules in the incidents at the hotly-contested South China Sea.

Some eight percent also believed the Philippines needs to elevate the incident to the United Nations General Assembly.

Beijing, however, has refused to acknowledge the arbitral ruling.

Filipinos' continuing distrust in China and Russia came despite President Rodrigo Duterte's decision to pivot foreign policy away from the United States (US) and toward China and Russia.

The survey showed that the US, the long-time ally of the Philippines, remains to be the most trusted country, enjoying trust score of 89 percent.

Japan is the next most trusted nation, registering a trust rating of 79 percent, followed by Australia (76 percent), and United Kingdom (56 percent).

In a statement, Presidential Spokesperson Salvador Panelo said the Palace "notest" the results of the recent survey conducted by Pulse Asia.

"As we previously said regarding similar survey results conducted in the past, we are not surprised -- neither are we bothered -- by the outcome, considering that it has only been three years since the Duterte administration has chartered an independent foreign policy course for the Philippines," he said.

"While we are not forcing any preference to the mentality of our people, we understand that it entails a lot of information dissemination for Filipinos, who have been pro-American for more than a hundred years, to appreciate the current government's foreign diplomacy approach, that is 'friends to all, and enemies to none' which has reaped economic benefits to the country," he said.

Concerning the Recto Bank incident, Panelo said the current administration agrees that the crew of Chinese involved in the allision should be held liable.

"We share public opinion that China should sanction the crew members of the involved vessel which carried its flag," Panelo said.

"This position has never wavered, contrary to the false narratives made by the President's most vocal critics and detractors who have been busy stoking anti-China views with the sole aim of discrediting the diplomatic strategy of the President -- to no avail," he added.