Turn to the music 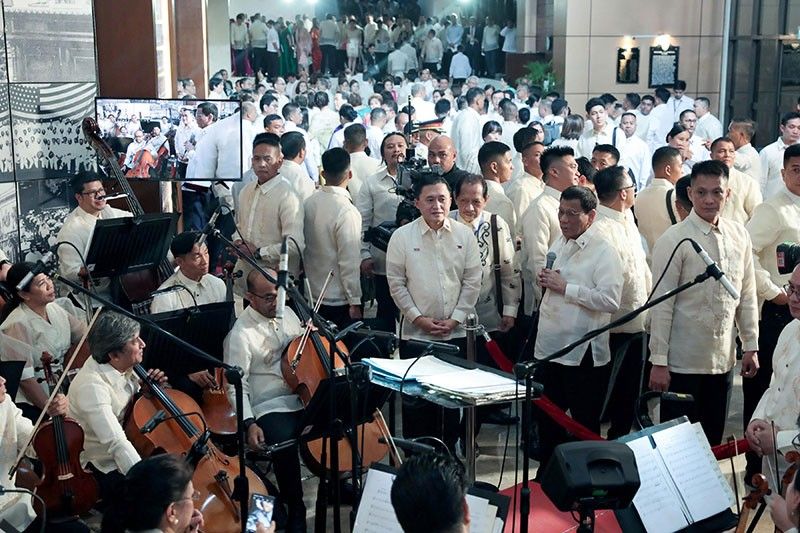 MANILA. President Rodrigo Roa Duterte sings along with the Philippine Philharmonic Orchestra after delivering his Fourth State of the Nation Address at the House of Representatives in Quezon City on July 22, 2019. (Alfred Frias/Presidential Photo) 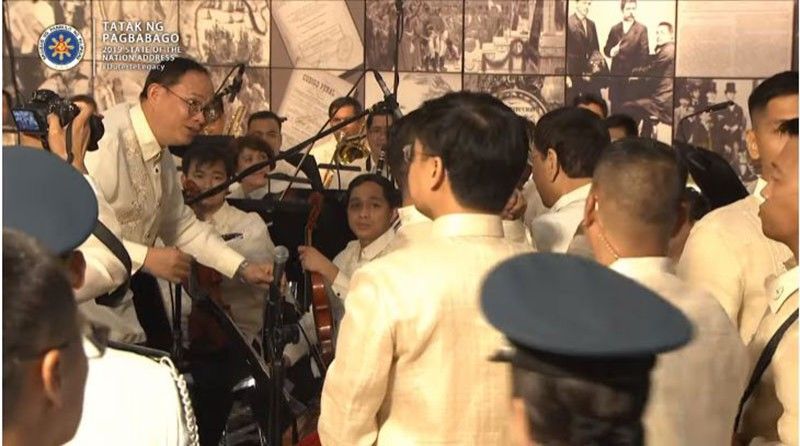 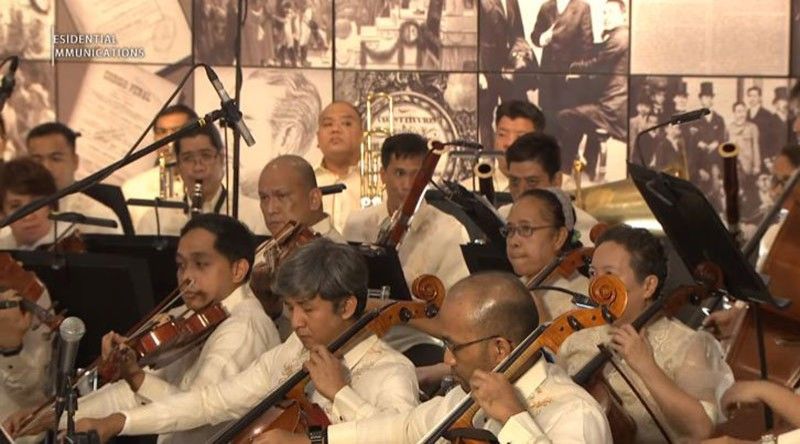 IT WAS a surprising and sweet gesture when President Rodrigo Duterte dropped by to express his gratitude and praise to the Philippine Philharmonic Orchestra (PPO) right after delivering his Fourth State of the Nation Address (Sona) on July 22.

The 15-minute interaction between the President and the orchestra was a light moment after the Sona.

Flocked by his team and the Presidential Security Group (PSG), the President was on his way to leave the Congress. It took a while for the President to get out of the session hall with lawmakers flocking him on the sides.

The orchestra was 35-seconds into playing “Ikaw”, a popular original Pilipino music, when the President was exiting the session hall. The PSG were guiding the President to make a turn for their exit.

There was a bit of confusion, surprise, and amusement in the faces of the musicians of the orchestra. They were clearly wondering why the President would stop at their spot.

I guess he was just there to watch them play. However, without missing a beat, PPO associate conductor Herminigildo Ranera, asked the President if he wanted to sing.

Towards the end of the song the President was smiling at the orchestra with a look that clearly shows how impressed he is with them.

“Ang ganda,” the President said after the PPO played “Ikaw”.

The singing did not stop there. The President sang with them for another round with “Moon River”.

Then to the surprise of the orchestra, the President invited them to his office.

“I owe you one, can I invite you to my office? Tayo-tayo lang. Dinner tapos I will invite a few makining,” Duterte said. This was received with much cheer from the orchestra.

He then candidly opened up to the PPO of how he feels like a prisoner.

“I am tired of this. Hindi ako makagalaw, hindi ako maka labas. Wala talaga...I am practically a prisoner,” Duterte said.

President Duterte then segued as to how music lightens up the situation he is in.

“It brings your soul to beauty. It brings you closer to God. Ang ganda, I salute you (the orchestra),” he said while some members of the orchestra were taking photos of him and selfies with him in the background.

Duterte then asked Senator Bong Go to arrange the dinner with the PPO and ten other friends.

“Mag-play sila and then dinner,” the President told his former and most trusted aide.

The President then thanked and returned the microphone. He turned his back to leave after saying his goodbyes.

However, seconds later he turned around to listen again to the orchestra’s last song. Minutes later, he was joined by his daughter, Kitty Duterte.

Duterte was clearly appreciative of the orchestra. You can see it in the way he looked at them while they were playing.

The President did not leave while the orchestra was in the middle of their last performance. He waited until the last note was played.

We may know him as the tough talking President, whose words have stirred one controversy after another. However, it is uncommon for us to see this lighter side of him. For a brief moment, the orchestra cheered him up and may have lightened up his mood.