Deep satisfaction from a life in the shallows 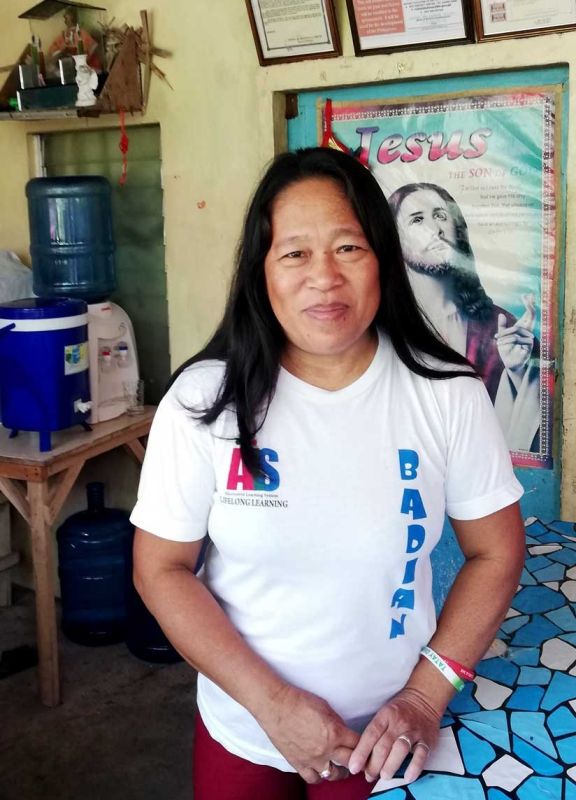 FLORDELIZA Ferolino admits she is likely to drown in deep water unless a strong swimmer were to help her, but as the leader of a community of farmers and fisherfolks, she skillfully swims against the current.

Nearly six years ago, she began to organize the Dunggoan Fisherfolks Association in Badian, Cebu Province by bringing together individuals who catch or sell fish, or glean seashells and other edible items in the shallows. Together, they have since planted mangroves and built fish cages as local partners of different government agencies.

Of the 46 individuals Ferolino now leads, 22 are women.

Women take up less space than men do in the government’s reports about fisheries in the Philippines, but Ferolino quietly defies that trend. She moved to Cebu from Leyte as a teenager because she wanted to be a midwife. A teacher supported her until her second year in high school. Various jobs in Metro Cebu followed: household worker, factory worker, lending company collector. While visiting Badian town during a fiesta, she met a fisherman who soon gave her seashells as a present. She moved to Badian to be with him. They now have a 19-year-old son.

What Ferolino’s husband earns as a fisherman, she supplements by helping others secure birth certificates and other documents from the municipal government and other public agencies, for a small fee. The family owns a fish pen and a vermiculture plot. On some days, Ferolino, now 51, goes to the shore when the tide ebbs to glean enough for the family’s meals.

Looking beyond her problems

Volunteer work, she says, keeps her strong. “So many people have helped our association and I intend to keep helping in whatever way I can,” she says. When asked to pick her favorite word during a focus group discussion in March 2019, she chose two: compassion and patience.

Ferolino applies both patience and assertiveness in her work. Her group has dealt with delayed funds and some failed promises.

For more than a year, they have waited for the environment department to compensate them for five hectares of mangroves they had planted. Just under 80 percent has survived. They have tried raising organic vegetables, but that didn’t prove feasible, and they have tried raising livestock, too. In 2014, the labor department offered at least eight Badian associations funds to build fish pens, but Ferolino says her organization balked at the required counterpart of 10,000 rabbitfish (locally known as kitong) fingerlings. Each one would cost them at least P3.

How, she asked, were they supposed to raise the money to get all that?

Still, they keep looking for opportunities to gain government support for livelihood projects. And the group did receive P146,000 from the labor department, out of the P259,000 they had originally proposed to build a fish pen. “Sayang man sad ug di namo dawaton to (It would have been a waste not to accept it),” Ferolino says. The fact alone that they had organized themselves and registered with the labor department to qualify for financial assistance already placed them in a better position than other community associations.

As of May 2019, they were waiting for word on their application for a Protected Areas Community-Based Resource Management Agreement, which would empower the group to guard against illegal fishing activities in their stretch of Poblacion, where cyanide fishing used to be practiced. It would also allow Ferolino and her allies to stay on their coastal lots for at least 25 years, if not longer, so it’s an effort to obtain security on at least two fronts.

“What else do we need to do?” she asks. “I have worn out a pair of slippers from all the visits I’ve had to make to the town hall.” Perhaps she is too humble to emphasize it, but Ferolino has also managed, so far, to wear down any obstacles she and her organization have had to face.

Much is made of the increased fish yields and other economic benefits of coastal resource management (CRM) in the Philippines, and rightly so. Effective CRM, which includes the declaration of marine protected areas at the level of villages (barangays) and towns, means more food on Filipino families’ tables.

But Ferolino’s experience highlights another benefit from CRM efforts that involve communities. They lead not only to better awareness and deeper knowledge of fisheries for the individuals involved, but also to an improved ability to resolve community conflicts.

In 2002, when a team from the Coastal Resource Management Project and the International Center for Living Aquatic Resources Management assessed the planning and management of marine protected areas (MPAs) in the Philippines, they recommended creating and supporting alliances of people involved in community-based MPAs. That way, they could share and learn from each other’s experiences.

Ferolino is currently active in one such alliance, facilitated by Oceana, of fisherfolk leaders from communities along Tañon Strait. The more local officials, nongovernment organizations, and associations like Ferolino’s get involved in such collective efforts, the more hopeful one can be about the state of CRM in the country.

“I am just concerned about my community,” Ferolino points out. She pauses during the interview to show a sheaf of cards that were supposed to entitle their bearers to free health care from the Provincial Government. “Every time there’s a program that might help the poor, I will see what I can do.” Even if that means distributing cards in the midst of a heated election season.

Has she always been assertive? Ferolino says the trait is something she didn’t have as a teenager, that it developed as she learned to help other people perhaps as one way to take her mind off her own difficulties. When she was 26, she went to attend a vigil outside the Cebu Capitol for Flor Contemplacion, a domestic worker who was then about to be executed in Singapore for a murder conviction.

“I know what it’s like to work as a maid,” Ferolino says. “So what happened to Flor Contemplacion really pained me.” She was riding a motorcycle on her way home from that vigil when a taxi hit her. Later, when she talked to a priest about the experience, he told her that her survival meant God had a mission for her and so spared her life. “I thought, whatever I could do from that point on to help others, I would do.”

There is much to do in Badian, although it has had some success with CRM.

In 1987, Badian established the Zaragosa fish sanctuary, a 9.7-hectare no-take zone. Local officials hoped that by doing so, they would create a prime tourist destination, apart from increasing fishers’ catch in areas adjacent to the sanctuary itself. When local officials declared another sanctuary in 2003, the Bato seagrass and fish sanctuary, they emphasized food security as their overarching goal. Of course, Badian’s waters also form part of the Tañon Strait Protected Seascape, designated as a national protected area in 1998.

Despite these inroads, the community has to deal with the threats of commercial fishing intrusion, and illegal destructive fishing practices.

“A lot of people want to become members of the association but I would like to work only with those who are truly willing to give their time to help,” Ferolino says. “After all the hard times I’ve been through, I’m still alive. Maybe God really wants me to keep on helping others.”