Duterte jokes about political dynasties, including his own 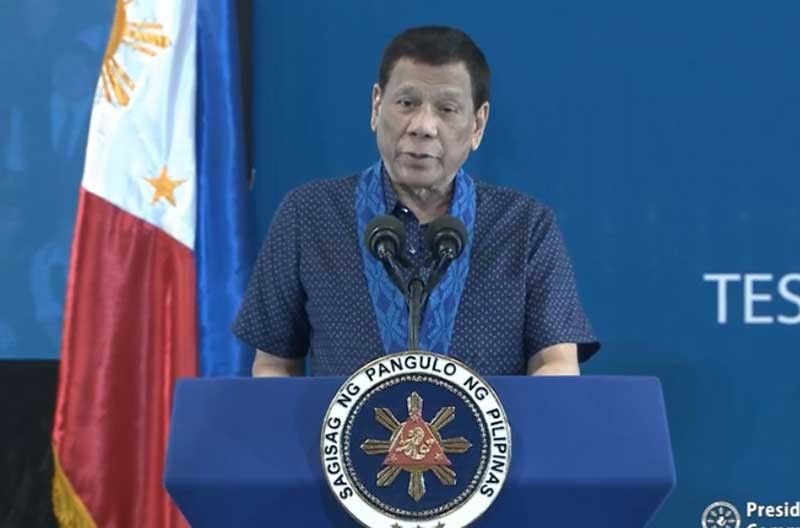 MANILA. President Rodrigo Duterte speaks during the launching of 911 TESDA in Taguig City on July 30, 2019. (Photo from presidential video)

PRESIDENT Rodrigo Duterte, whose family has held political power in Davao City for more than three decades, joked about the Cayetano "political dynasty" in Taguig City, Metro Manila as well as his own.

Duterte made the joke when he introduced them during the launching of the Technical Education and Skills Development Authority (Tesda) mobile platform called 911 TESDA in Taguig City on Tuesday, July 30.

Alan Peter and his wife, Lani, were proclaimed representatives of Taguig City First and Second Districts, respectively, during the May 13, 2019 midterm elections.

Alan Peter was also elected House Speaker at the opening of the 18th Congress on July 22.

The Cayetano couple's bid for a seat at the House of Representatives was met with criticisms and strong opposition.

A petition seeking the cancellation of the couple's certificates of candidacy was filed before the Commission on Elections, but the poll body junked the disqualification case on May 6.

In his speech, Duterte acknowledged that even three of his children also occupy government posts.

"Well, you can ask the same question safely with me. 'Yung mayor, si Inday. The vice mayor, si Baste. Bilib na ako ngayon. May haircut na. At walang ginawa 'yun sa buhay niya kung hindi babae. Ngayon, he worries about the public interest. And that is [why] I'm grateful to God," the President said.

(Well, you can ask the same question safely with me. Inday is mayor, while Baste is the vice mayor. I am impressed with him now. He has the proper haircut now. Before, he was a womanizer. Now, he worries about the public interest. And that is [why] I'm grateful to God.)

(Pulong is... But you can be very sure that Inday is good, and even Sebastian. I haven't seen Pulong in the past few days. He's been going to different political parties. NU... What is that? Well, it's better if he joins the NPA.)

On June 23, Duterte confessed that he felt embarrassed when people talk about political dynasties, but stressed that political families remain in power because voters prefer to vote for members of these dynasties. (SunStar Philippines)