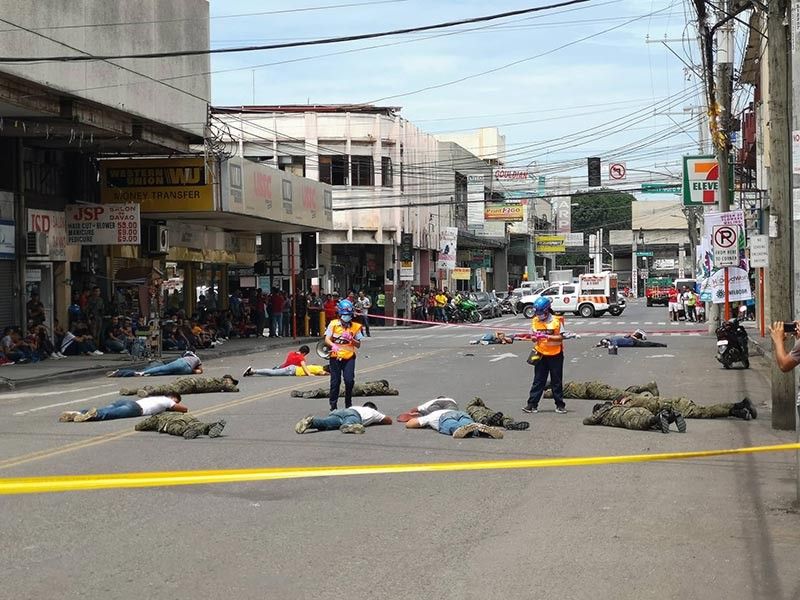 A DAY before the start of the month-long 34th Kadayawan Festival, which is expected to draw a massive crowd, the safety and security cluster of Davao City Government conducted a simulation exercise Tuesday morning, July 30, to allow them to respond to potential terrorist attacks.

Davao City Police Office (DCPO) Director Alexander Tagum said they have initiated the activity to assess the preparedness and coordination of all units and government agencies involved in the security for the festivity.

They responded to different scenarios like a terrorist attempt of employing a motorcycle borne improvised explosive device, followed by a suicide bombing, and an active shooter and mass casualties scenarios along the Kadayawan parade route, particularly on Legaspi and San Pedro Streets, Davao City.

The Public Safety and Security Command Center (PSSCC) and DCPO together with Task Force Davao (TFD) spearheaded the exercise with the full participation of all local security and safety units.

The lockdown and traffic re-routing was supervised by the Davao City Transport and Traffic Management Office (CTTMO). It was also attended by Police Regional Office (PRO) Regional Director Marcelo Morales.

"We planned to make it a fast pace, evolving, and complex terrorist attacks which will test the reactions and Commo discipline of our deployed Static and Mobile Security Personnel along the parade route," Tagum said.

He said the activity was a cooperation of the DCPO and TFD EOD-K9, the fire suppression capabilities of the Bureau of Fire Protection, the tactical capabilities of the Special Weapons and Tactics teams to confront active shooters mixed in the crowd, the mass casualties intervention of the Central 911, and the traffic management capacity of CTTMO and Traffic Group to effectively lockdown downtown Davao and initiate traffic re-routing.

All this with the end view of honing and enhancing the proper response capabilities of this cluster.

Based on the assessment of the chief of the Philippine Bomb Data Center Colonel Hanzel Marantan and Red Team Leader of PRO-Davao Colonel Elda Empleo, Tagum said they were impressed with the proper handling and management of the Terrorist Situation through the Incident Command System, as well as the quick response of all security and safety units and the capability and capacity of Davao City to handle a possible future contingency.

Despite this positive feedback, Tagum said they will not be complacent and will continue to innovate possible security measures on how to further secure the city from atrocities especially during big events like the annual Kadayawn.

"But personally, we cannot be satisfied with our response. There are still areas that need improvement, and our need to practice and prepare our people to properly respond to this kind of scenarios will remain our primary concern," he added.

Earlier, DCPO said they will maintain its full alert status in Davao City during the entire month of August to ensure the safety and security of festival-goers.

There will be around 3,000 policemen deployed during the celebration. This includes the augmentation of 200 uniformed personnel coming from the PRO-Davao and additional police from different provinces.