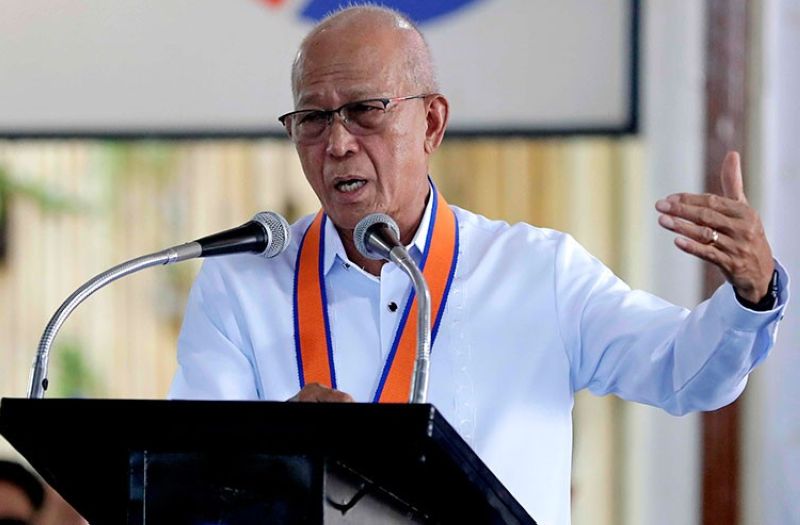 MANILA -- The Philippine defense chief criticized China on Tuesday, July 30, for what he called "bullying" actions in the South China Sea and said Beijing's peaceful assurances contrast with its behavior in the contested waters.

Defense Secretary Delfin Lorenzana criticized China's increasingly assertive actions when asked to comment on the Chinese ambassador's assurances in Manila that Beijing won't seek hegemony in the disputed region and "will not take the first shot."

"They say we do not bully people around, they follow international law, but I said you are not, what you are telling is not what you are doing on the ground," Lorenzana said in one of his most stinging public rebukes yet of Chinese actions in territories claimed by Beijing, Manila and four other governments.

Unless China does what it says, its words will be doubted and Filipinos will continue to look at Beijing with mistrust, said Lorenzana, a retired army general. He cited China's low trust ratings in local opinion polls compared to those of the United States, a treaty ally of the Philippines.

In a speech in Manila late Monday, July 29, to mark the anniversary of the People's Liberation Army, Chinese Ambassador Zhao Jianhua said his country's peaceful intent is enshrined in the Chinese constitution and that it's strengthening its military "entirely for the purpose of self-defense."

"No matter how strong China may become, China will never seek hegemony or never establish spheres of influence," Zhao said. "China will remain committed to serving as a force for peace, for stability and for prosperity in the world."

Zhao added that "China adopts a military strategy of active defense which adheres to the principle of defense, self-defense and post-strike response. Meaning we will not take the first shot."

China's PLA is ready to deepen trust with the Philippine military, he said.

"We cannot let the one percent differences hijack the whole 99 percent of friendship and cooperation as hostage," Zhao said.

Lorenzana called China's takeover of the Scarborough Shoal following a protracted 2012 standoff as "bullying." The United States brokered a deal for the simultaneous withdrawal of Chinese and Philippine ships from the vast fishing shoal, but Beijing reneged, prompting the Philippines to bring its disputes with China to international arbitration the following year, according to Philippine officials.

The Philippines largely won the case, with the arbitration tribunal invalidating in a 2016 ruling China's historic claims to virtually the entire South China Sea based on the 1982 UN Convention on the Law of the Sea. China refused to participate in the arbitration and ignored the outcome.

President Rodrigo Duterte, who revived ties with Beijing after taking office in 2016, has refused to immediately seek Chinese compliance to the arbitration ruling while seeking Chinese infrastructure funds and investment, often coming under criticism for his China-friendly approach. (AP)