U2 in PH: All you need to know 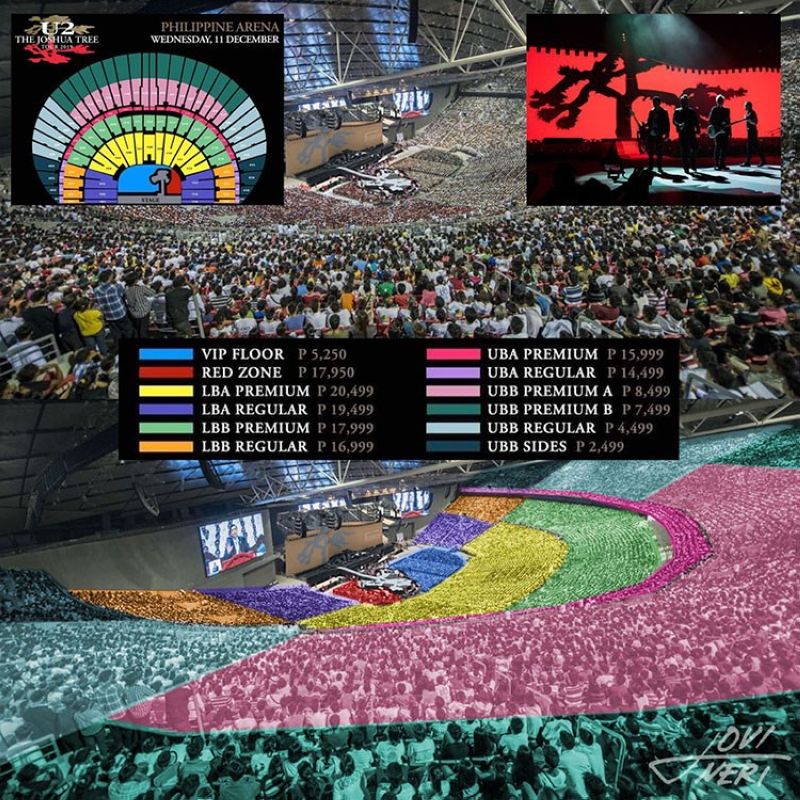 EVER since U2 announced its Dec. 11 show in Philippine Arena, my chat groups and private messages have been exploding. My friends consider me a U2 "authority" because I have seen them six times since 1997, which I honestly think is not enough. So let me share what I know.

Study the accompanying image I attached first! I super-imposed the stage of U2's 2017 Joshua Tree Tour 2017 into a stock image of the Philippine Arena then I color-coded the sections to match the corresponding ticket price levels. While not in perfect perspective or scale, this should give you an indication of how it will look. Everything I've heard points to them re-using this 2017 staging for this 2019 version of the tour.

Signing up to the U2 site for presale access

It says the presale is Sept. 1 to 3 for U2.com members so you can subscribe—the cheapest being $40. It's worth it in the grand scheme of things because you can get tickets at face value and a free subscriber gift of your choice. If you buy tickets from resellers like Stubhub, the premium you'll be paying will definitely be more than $40. As a new subscriber, you will only get presale access on Sept. 2 or 3. Priority for Sept. 1 is given to those who are year-long members who will be in a categorized presale group known as "Red Hill." The rest will be in the "Wire" group usually a day or two after. Don't worry, considering the 55,000 capacity of the arena and the fact that long-time U2.com members probably already got tickets and secured travel plans to other countries, you won't have competition even if you start Sept. 2 or 3. All good spots will still be available in presale.

What seats to buy?

Bono has always said in U2 shows, they want the best seat in the house to be the backmost. The band also wants the ones closest to the band those with the cheapest ticket. So the VIP Standing is only P5,250, but you have to line up early, it's first come, first served. The seated ones are priced high for the convenience of reserved seating, but the ones in the backmost are not bad at all because you get a full view of the massive 8k resolution screen. U2 concerts are a mix of music and accompanying imagery so there is a lot of information sensory overload in every show.

Which section has the best view?

If the 2019 version of The Joshua Tree Tour will have the same arc as 2017, then it will start with U2 opening the show on the tip of the "tree" a.k.a. the B-stage and play 4 or 5 songs. From there, they will move to the main stage and they won't really move a lot around the different portions of the stage, except perhaps for Bono. Toward the end of the show, they might play the last two songs again on the B-stage. Hence, the most up-close view is the VIP Standing of P5,250. Go early and find a spot right in front of the drum kit on the main stage. The P17,950 Red Zone ticket is a reserved standing section at the left side of the arena. It's for the people who want to pay three times the price to forego lining early and still get a good standing spot. While the Red Zone is right by the B-stage, the walkway gets in the way of you being near the drum kit which is the middle main stage. Only VIP Standing can get you there.

How will I know if my view will be partially obstructed?

There is absolutely no way of knowing this. You will just find out on the day itself because even the band crew only see the venue and start setting up two or three days before the show. However, based on the fact that this is probably the only Joshua Tree Tour show inside an indoor area, and since the layout here shows that speakers can hang from the ceiling, it looks like everywhere might be a good view. There will be no speaker towers on the floor, unlike the Joshua Tree Tour 2017 images you find online because those are outdoor venues. The Philippine Arena has the potential to be the best show in terms of view and sound quality—let's keep our fingers crossed!

If I run out of good seats, what’s my alternative?

If you found it too cumbersome to sign-up, or missed the presale because you were hungover from the previous night, I still have some tips for you. The best spots are usually on the floor closest to the band, or seated with a straight-on view of the giant screen. However, if you have to buy tickets in the side, I would recommend the left side if you are facing the stage. That's because the B-Stage where they will perform 5 to 8 songs is banked to the left side of the venue. The walkway is also in that area and Bono stays there often. That side is also the side of their guitar player, The Edge, who is largely credited for U2's unique sound. It's also interesting to see him in action with his massive effects pedals and the fact that he goes through around 20 guitars in one given show—almost a guitar change every song!

Should I attend this instead of Singapore?

If you already have tickets to Singapore, then by all means go! The Singapore show is concert history right there because it is not only U2's first time in Singapore, but also the first time in the band's rich 40-year career to ever perform in Southeast Asia. Also, the band members are in their late 50s, so you can never tell if God-forbid some things will happen. They have postponed an entire leg of the tour before due to health issues, and even just last year, U2 had to stop a concert after playing 5 songs because Bono lost his voice. Since Singapore comes before Manila, it's good to have that show in the bag already. I also got a lot of half-joking remarks that Singapore is actually nearer for Manila residents to get to because Philippine Arena is in Bulacan (not Manila!) and the traffic getting in and out is horrendous. The Singapore shows are on a weekend, but the Manila shows are on Wednesday. Someone also said it took 2 hours to leave the parking lot in the Guns N’ Roses concert in Philippine Arena, so imagine what time you will have to get home and still have to go to work the next day. If it were Singapore, you can just take the railway straight to your hotel or airport after the show. I've also been lurking in ticket reseller Stubhub the past few months and my notifications on U2 tickets always tell me about tickets being bought from the Philippines. There will be so many Filipinos attending the Singapore concert, so it will just feel like home for most of us.

Bono is already 59 years old and there are sad stories of aging rockstars having trouble hitting the high notes. Well, I just watched U2 last year and Bono was still able to belt out "Pride In The Name Of Love" without going out of tune. The song was only played half-a-key lower than how U2 played it in the 1980s, so it pretty much sounds the same. Bono has also been taking voice lessons over the years so while it's no longer as rich and powerful as it once was, he still knows how to modulate it to hit the notes when he needs to while avoiding getting out-of-tune. U2 shows also don't use smoke machines anymore, so they are more forgiving to his voice. Real fans of “The Joshua Tree” album know that for 30 years, U2 never played the song “Red Hill Mining Town” live. It was probably because it was too high for Bono to sing night in, night out. Now, he can sing that song, in a different style and just only a key down, but it still requires a Herculean vocal effort to bring it in every night. While that youthful enthusiasm is long gone, U2 are tighter and more skilled as musicians than when they were younger. They still have a long way to go before they become a washed-up band.

Why will the Philippines be a special show?

Apart from it being the first time U2 will play here, it will be special for so many reasons:

(1) The Philippine Arena was built by the Iglesia Ni Cristo group and one of the Joshua Tree's most famous songs—“I Still Haven't Found What I'm Looking For"—is a gospel song that U2 have always felt belongs in church ever since they heard a Harlem-based church choir sing it. You can be assured it will be performed with some extra oomph this time because this is probably the first time since 1987 that U2 will perform this song in "church."

(2) This can potentially be the last Joshua Tree Tour show they will ever do, barring any more surprise announcements, because U2 don't plan to tour in 2020. They will return to the cycle of making an album then conceptualizing the next tour to follow. This is the definitely the end of the Joshua Tree Tour Anniversary era so U2 will definitely make this a special show.

(3) U2 shows are politically charged. Some themes in The Joshua Tree album included critiques on the US foreign policy of Republican Ronald Reagan in the ‘80s. Now, there is President Donald Trump, a polarizing Republican who U2 aren't really fond of. Trump is actually one of the reasons why U2 felt it relevant to revive “The Joshua Tree” in 2017, although the band never directly admitted it but strongly implied it in many interviews. The Philippines has President Rodrigo Duterte who is alleged to tolerate and allow human rights violations here. U2 are longtime human rights activists embodied in their constant support of Amnesty International and are not shy to speak up about that. It doesn't matter if you agree or disagree with U2's views, just the fact that there will be a lot of political and ideological tension in their show will really only affect their performance, making it better and more emotional! They will also use some imagery on their state-of-the-art screen that are relevant and particular to the venue they are playing.

(4) This was mentioned already earlier, but since this is an indoor arena where speakers can be hung from the ceiling, it's entirely possible that U2 will forego using any towers for the speakers, hence, there could be no obstructed views and arena acoustics will be incredible. A good sounding venue means you can hear Bono's preaching in between songs very clearly and this can only get the crowd more involved. (Jovi Neri/Contributor)