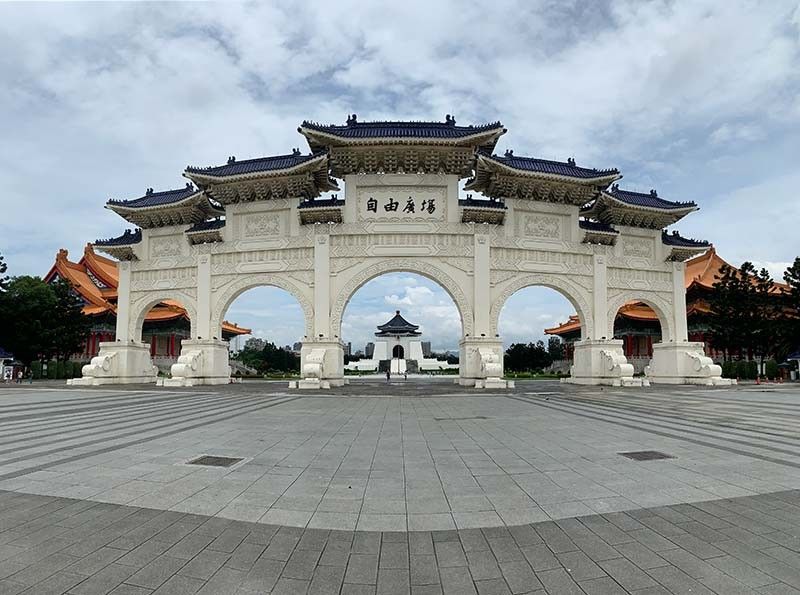 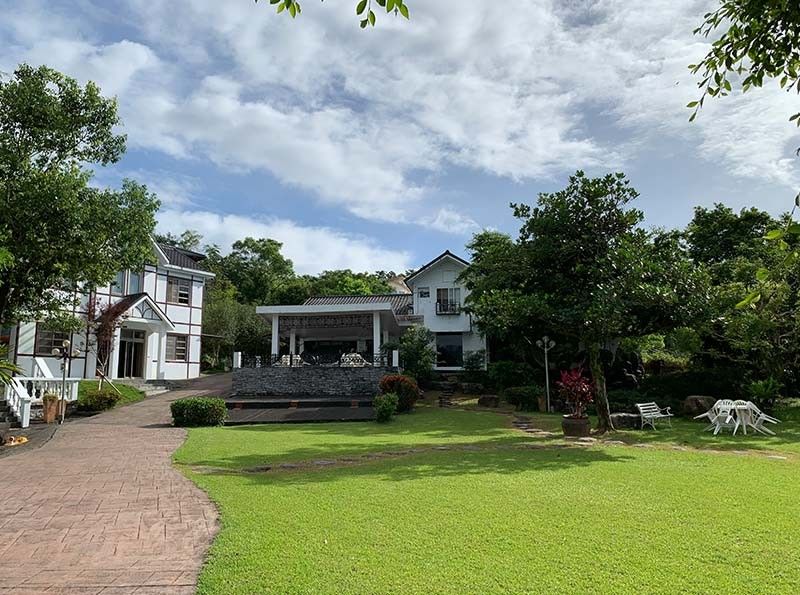 FENG CHUN VILLA. With all the exploring, it was a nice reprieve to have a few minutes at the bed and breakfast we stayed at in Datong Township, Yilan County to steam our feet—while others got a tea sauna—basking in the quiet in preparation for our trip back to the city. (Photo by Monica R. Lopez) 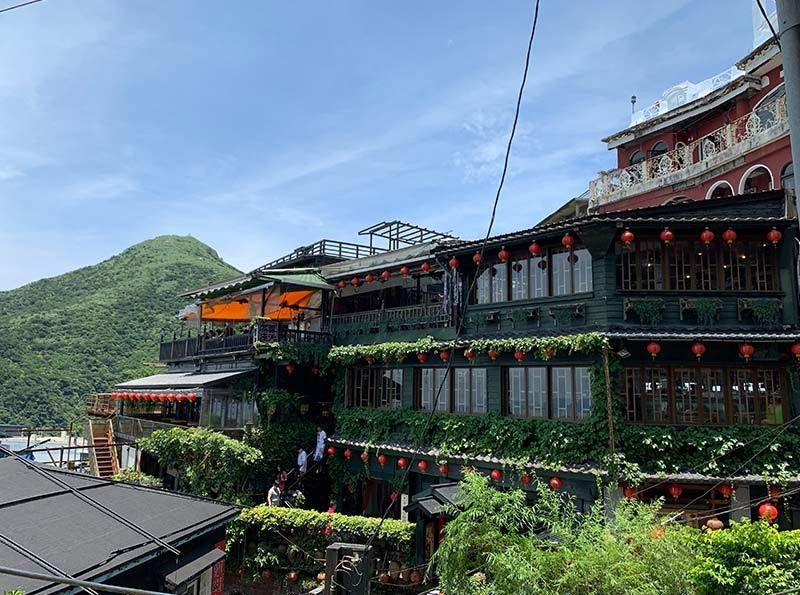 TOURIST SPOT WITHIN A TOURIST SPOT. The A-Mei Tea House, said to be the inspiration behind the bath house seen in the animated feature Spirited Away by noted Japanese director Hayao Miyazaki. (Photo by Monica R. Lopez) 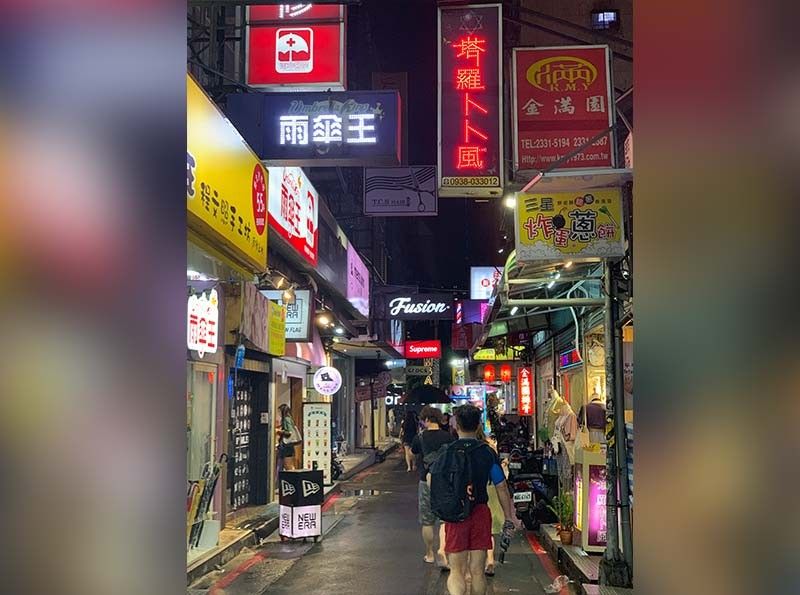 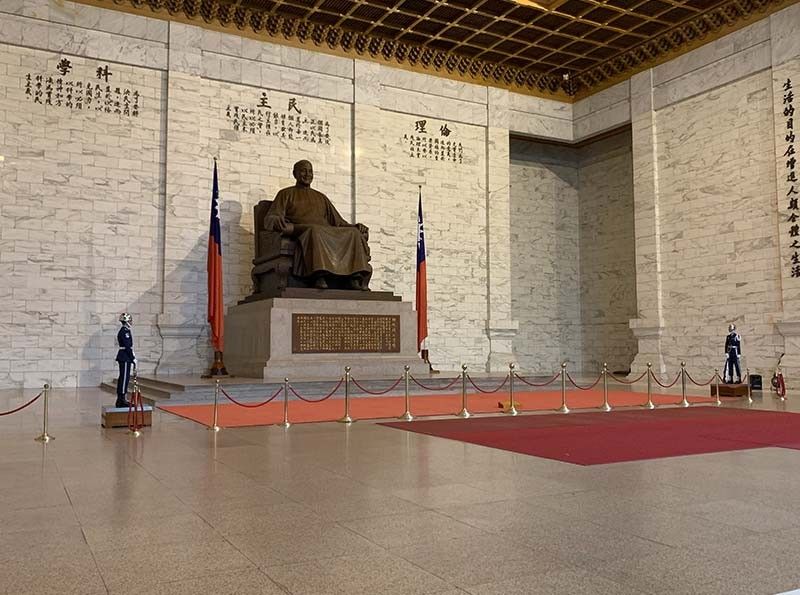 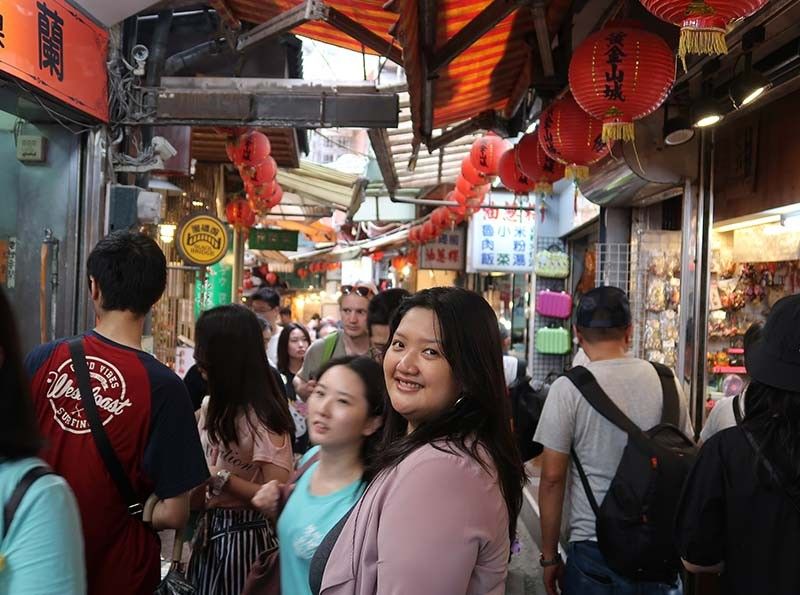 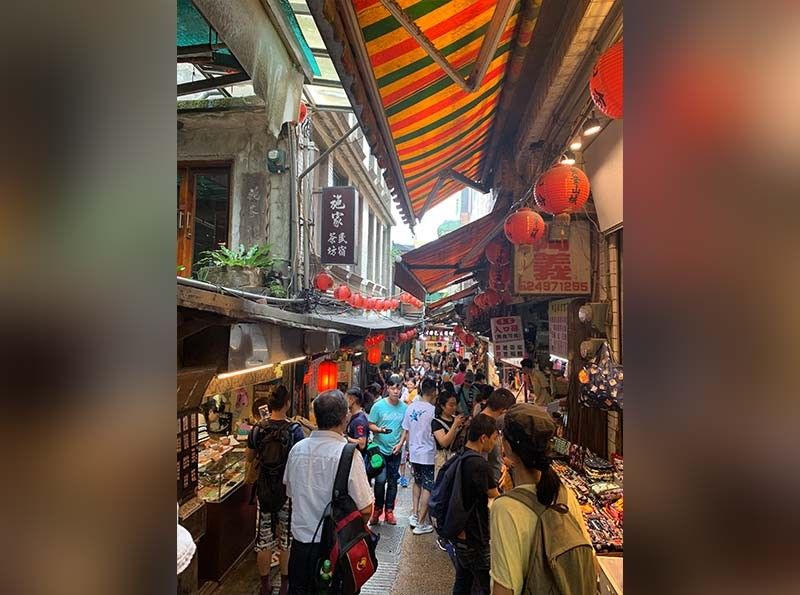 The narrow alleyways of Jiufen. (Photo by Monica R. Lopez) 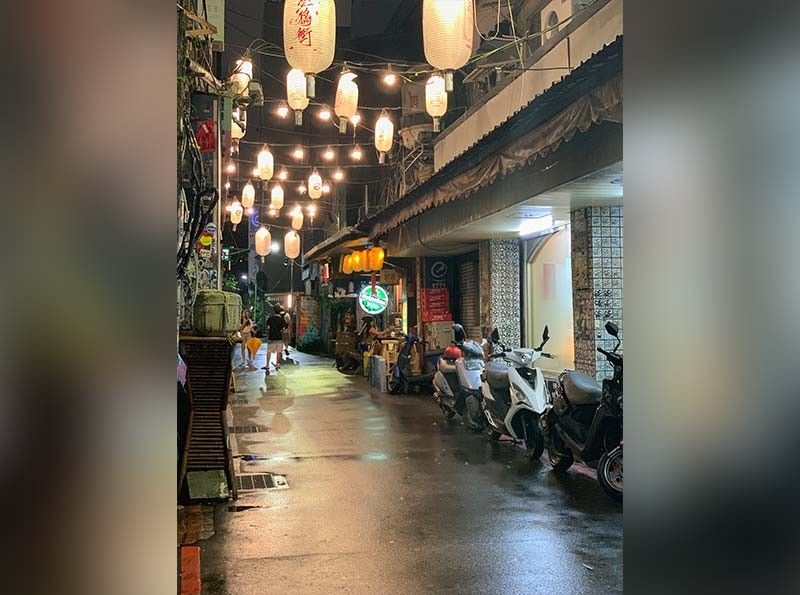 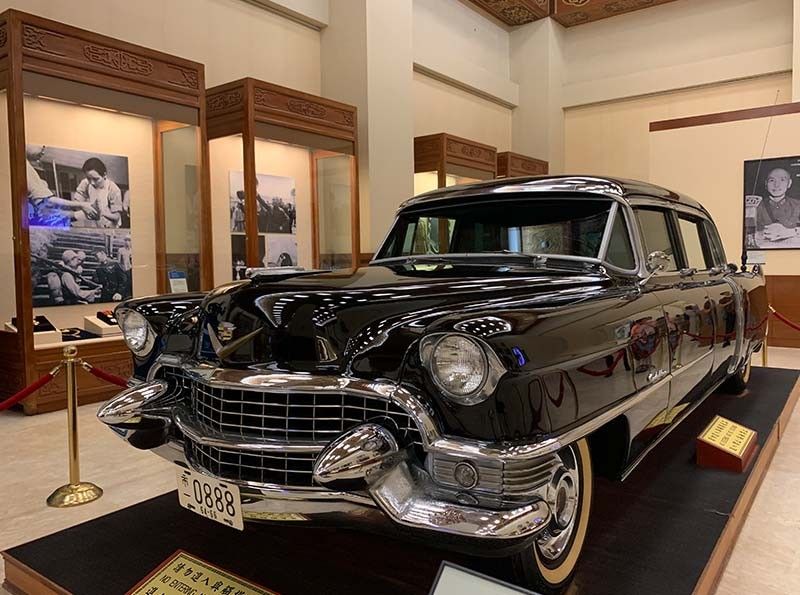 RIDE. The 1955 G.M.-manufactured Cadillac. One of Chiang’s official state cars donated by overseas Chinese in the Philippines, which was only used once. (Photo by Monica R. Lopez) 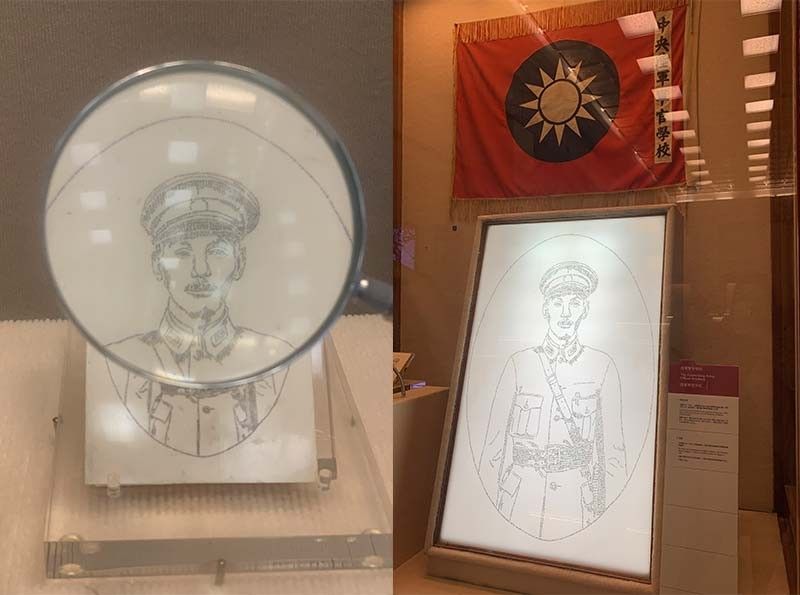 DISPLAY. Some of many artifacts found at The Exhibition Hall of Historical Relics of Chiang Kai-Shek. Photo shows a microscopic ivory carving of Chiang by Cheng Zheng-rong in 1936 and with it, the carving of the “Guidelines of National Reconstruction” by Sun Yat-sen; and the flag of the Kuomintang Army Officer Academy designed by chief instructor He Ying-qin in 1924. (Photo by Monica R. Lopez) 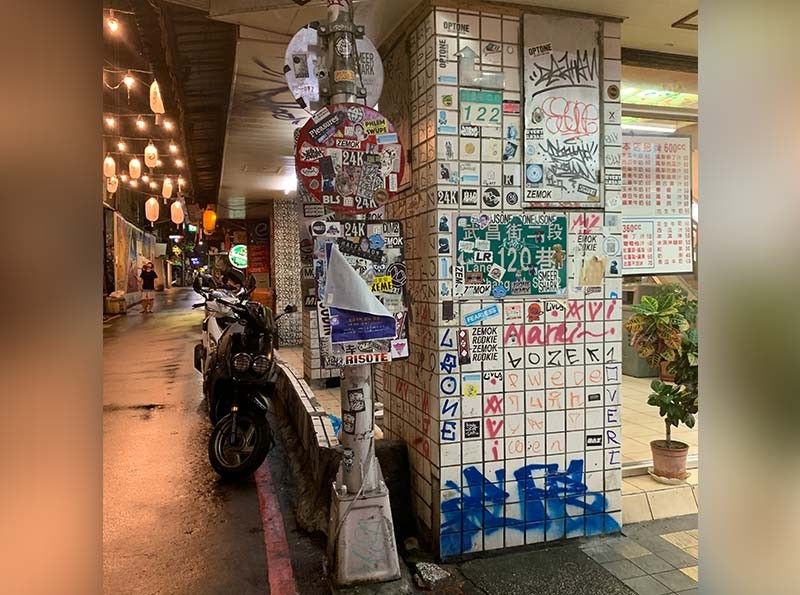 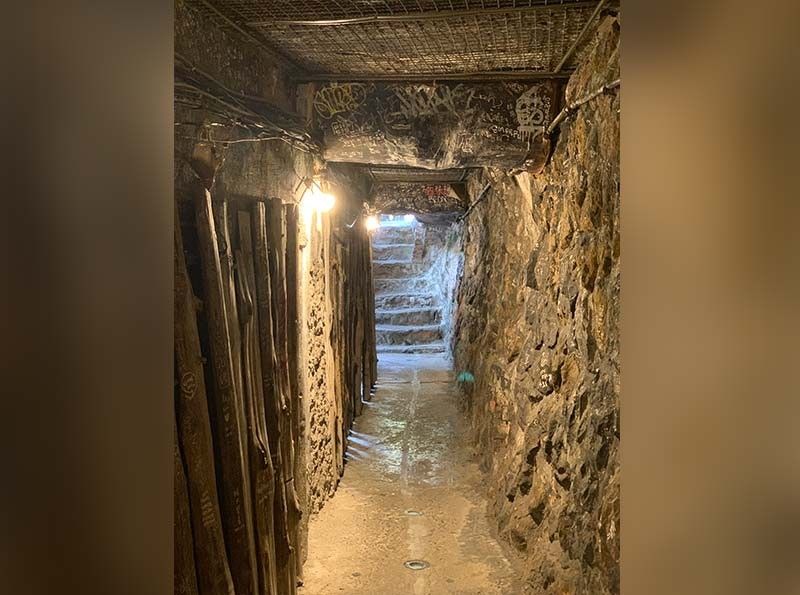 WALKING BACK IN TIME. The entrance to Taiwan Sweet Potato Teahouse. It was once the road Jiufeners passed to mine for gold. (Photo by Monica R. Lopez) 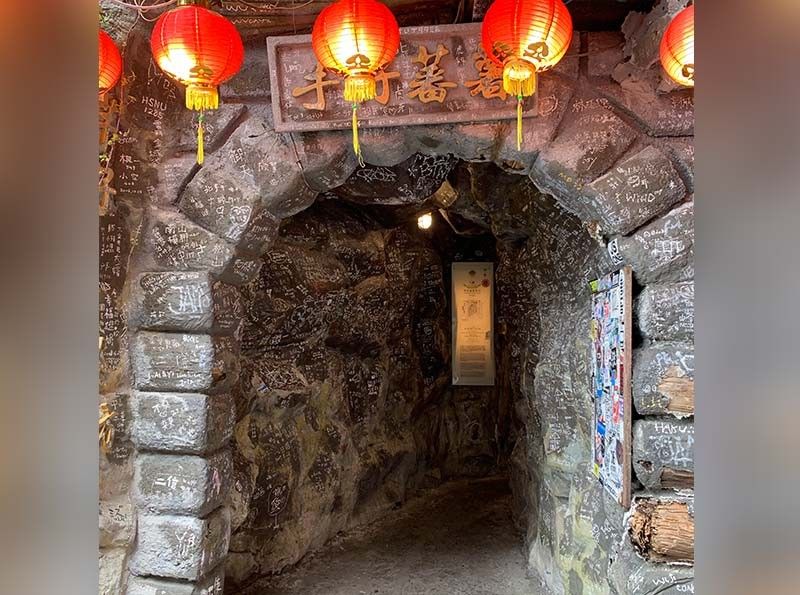 WALKING BACK IN TIME. The entrance to Taiwan Sweet Potato Teahouse. It was once the road Jiufeners passed to mine for gold. (Photo by Monica R. Lopez)

TAIWAN was a teenage memory explored only through television as I remember my eyes glommed on to the screen watching episodes of the 2001 Taiwanese drama Meteor Garden.

Sure enough, it was a topic most of us on the trip were not only familiar with, but also closely attached to. In fact, our group chat was named so. By spending six days with this bunch on a trip hosted by Taiwan Tourism Bureau and sponsored by Tigerair Taiwan, it’s not surprising we developed a sense of camaraderie.

Last week featured the start of our trip going as far as the countryside. In the days leading up to our departure back to Cebu City, we were getting really close to exploring Taipei, the capital of Taiwan.

On the fifth day, we headed to Jiufen in the northeast of Taiwan. Known for its teahouses, souvenir shops and street food stores which can be explored by walking its narrow alleyways, one can also get a view of the Keelung outer sea. Jiufen was once deemed the gold city of Asia and called “Little Shanghai” or “Little Hong Kong” until it lost its luster with the decline of gold mining activities. But people were reminded of its heyday as filmmakers shot films there, including A City of Sadness which won the Golden Lion award during the 46th Venice Film Festival. Its popular shopping area is Jiufen Old Street that goes through most of the village. Walking the alleyways felt like walking through time as remnants of what it once was blended with the new. Since we spent most of our time at the countryside, the bustle was a bit shocking.

Next to the restaurant where we had lunch was the famous A-Mei Tea House, said to be the inspiration behind the bath house seen in the animated feature Spirited Away by noted Japanese director Hayao Miyazaki.

Ours also had an interesting story and entrance. Called Taiwan Sweet Potato Teahouse, its tunnel entrance, now filled with doodles, was once the road that Jiufeners passed to mine for gold. After lunch, we continued to explore stores, from gift shops, food stalls, tea shops and more.

Up next was a trip to Chiang Kai-Shek Memorial Hall at Taipei’s Zhongzheng District, a 250,000-square meter monument created in memory of Chiang Kai-Shek, former President of the Republic of China. Its architecture was inspired by Tiantan in Beijing. At this point, we were rushing to catch the shifting of the guards patrolling the bronze statue of Chiang Kai-Shek. They are prohibited to move until their shift is done. After which, we wandered off to The Exhibition Hall of Historical Relics. It was divided into different display areas showcasing details about his life and historical role.

By nighttime, we strolled the streets of Ximending, a neighborhood and shopping district in the Wanhua District of Taipei. We were wandering on our own time. It was raining but it didn’t dampen our spirits. Filled with bright lights and colorful stores, it was nice taking a leisurely walk, stopping at every single interesting store, snapping photos or simply being surprised at the cool and unexpected finds. More than the stores, I loved the graffiti art that we discovered at every turn, while indulging in some milk tea and street food.

On the last day, we headed to Boai District to explore The National Theater and Concert Hall, open to the public since 1987. Both featuring traditional Chinese palace structure, both designs were preserved for the royals in ancient times and is now open to the public. Though it has oriental exteriors, it has a mix of features combining both eastern and western cultures with the help of consultants from The Netherlands and Germany to spruce up the interior. The theater has four floors and 1,498 seats. They’ve been host to many performances both local and international. Meanwhile the Concert Hall’s pipe organ has 4,172 pipes on it. It used to be the biggest pipe organ until October last year when it was surpassed by a performance space in Kaoshiung called Weiwuying.

Next stop was Taipei 101, the largest engineering project ever in the history of Taiwan construction. We headed straight to the indoor observatory located on the 89th floor where we got a spectacular 360 degree view of Taipei’s skyline. It’s also known for its Guinness Record-breaking high-speed pressurized elevators. What was also a sight to see was the world’s largest and heaviest turned mass damper, the only one in the world displayed for all to see located on the 88th floor.

We capped off our trip with a bit of a stroll at Gloria Outlets in Taoyuan City, a hearty dinner and an exchange of goodbyes that almost made us cry.

Although our love for Meteor Garden initially forged a bond between us media guests, it was our series of shared adventures that eventually solidified the bond during our six-day trip to sunny Taiwan. Should I have the chance to go back by myself, with my family or with my friends—this is one trip I certainly will look back on with happiness.