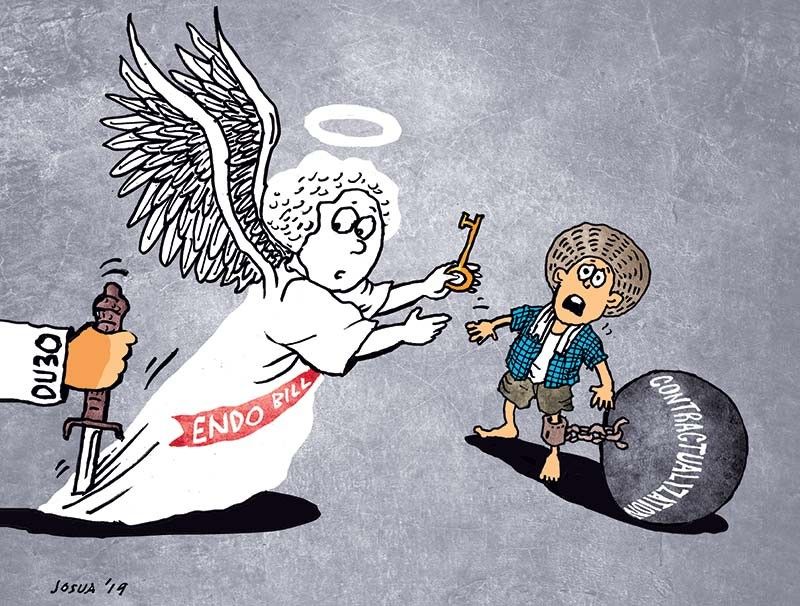 A PORTION of the President’s veto message on the Security of Tenure and End Endo Act of 2018 or the Senate Bill (SB) 1826 reads thus:

“While the bill mostly codified into law existing rules, regulations, orders and jurisprudence on matters of labor-only contracting and security of tenure, it likewise unduly broadens the scope and definition of prohibited labor-only contracting, effectively proscribing forms of contractualization that are not particularly unfavorable to the employees involved.”

Senator Joel Villanueva was quick to reply, saying the very definition of “labor-only contracting” that they used in the bill was that of the President’s, when he certified the bill as urgent. The Senator re-filed the bill to open more discussion on the specificities in the bill, as to which particular provisions does the President or his circle of advisers find unfavorable.

The President’s veto message again: “Indeed, while labor-only contracting must be prohibited, legitimate job-contracting should be allowed, provided the contractor is well capitalized, has sufficient investments, and affords its employees all the benefits provided for under labor laws.”

But SB 1826 already had it clear, it allows for labor-only contracting provided that the contractee, in securing for a license, must show proof of a paid-up capital or net worth of P5 million. The bill also provides that workers “shall outright be deemed regular employees of contractee.”

The bulk of the President’s veto message, however, only leaves much to be desired with its plane abstraction.

“Businesses should be allowed to determine whether they should outsource certain activities or not, especially when job-contracting will result in economy and efficiency in their operations, with no detriment to the workers, regardless of whether this is directly related to their business. This is especially critical since empirical data shows that the Philippines is currently at a disadvantage already in terms of cost and felixibility of labor use compared to its peers in the region.”

The sound of it sent labor groups reacting in exasperation. It is as though the entire coalition of capital is putting words into the President’s mouth.

It has always been the perennial threat and fallacy of capital shutting down if labor demands more pay.

Villanueva wants “to find out from the President’s men or the officials who influenced the President to pinpoint which particular provisions do they find problematic.

This is one important bill that the public must never lose sight of now that it had reached the desk of the President. Discussions over specifics of the bill must be as transparent as they should be.