Duterte raises bounty for killers of Negros cops to P5M 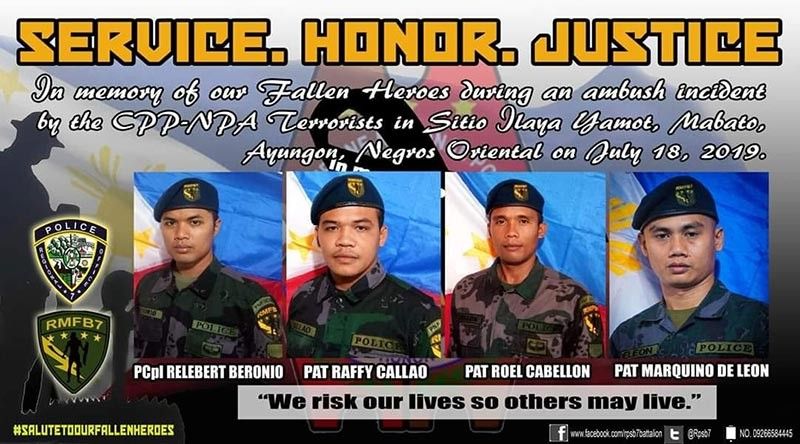 PRESIDENT Rodrigo Duterte has further raised to P5 million the bounty for the capture of people behind the brutal killing of four police officers in Ayungon, Negros Oriental, Malacañang announced Wednesday, July 31.

Presidential Spokesperson Salvador Panelo made the announcement in a statement issued Wednesday night.

“We wish to inform the public that President Rodrigo Roa Duterte has raised the reward money to P5M for the capture, dead or alive, of the killers of the Negros policemen and to P100,000 for every participant in the killing,” the Palace official said.

Duterte initially set the reward for the killers of Negros cops at P1 million, but raised it to P1.3 million during his fourth State of the Nation Address on July 22.

The President raised again the bounty to P3 million during his meeting with local chief executives on July 25.

On July 18, four policemen were allegedly killed and tortured by suspected members of the communist New People’s Army (NPA) in Ayungon, Negros Oriental.

Panelo warned that Duterte may use emergency powers to stop violence in Negros, as he noted that “the President vows to replicate the atrocious acts done by the communist rebels to the civilians, the barangay officials and the law enforcers against these murderers in defense of our countrymen.”

“The President has also issued a stern warning that the members of the NPA in Negros have gone overboard and that their killings have become brazen and unbridled where men in uniform, as well as civilians are murdered with impunity,” he said.

“The Chief Executive is cautioning the enemies of the state in the island of Negros that he will use his emergency powers under the Constitution to quell the lawless violence engulfing the island, as well as to crush all forms of threats aimed to destroy the government,” he added.

Panelo stressed that Duterte has to exercise his constitutional mandate to serve and protect the country.

He thus said that the President would not hesitate to go after individuals who seek to harm his fellow countrymen.

“The President will obey the constitutional command to serve and protect the Filipino people at any cost, and to fiercely save the Republic from imminent ruin,” he said. (SunStar Philippines)